Facebook Twitter LinkedIn
Sure, the first things that come to mind when you think "island escape" are white sands and palm trees.
Maybe a coconut with a straw in it.
But for those willing to look beyond the tropics, there are plenty of worthy island getaways around the world that have yet to appear on the tourism radar.
If the thought of amazing nature walks, a relaxed pace and fabulous food and drink sounds appealing, these five destinations are for you.
Solta (Croatia) 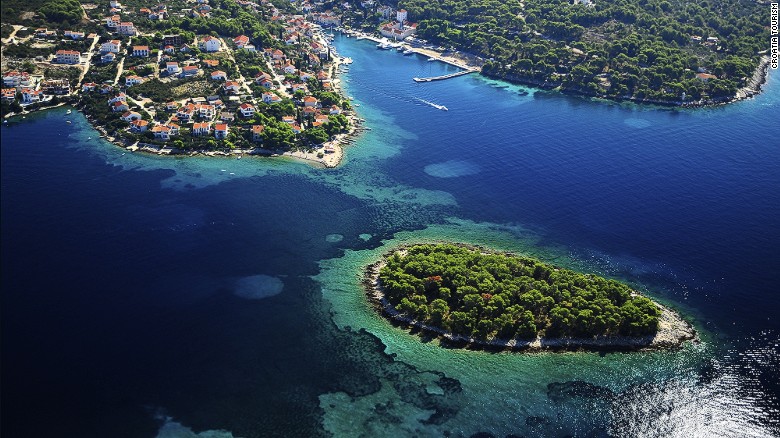 Solta, edged by the crystal-clear turquoise Adriatic Sea and pebble beaches, is a pine-covered island of 24 bays and 1,400 people.
Little-known compared to nearby Dalmatian islands like Korcula and Hvar — which has been enjoying a tourist boom since Beyonce and Jay-Z visited in 2011 — the Croatian island of Solta has a similar look: orange-tile-roofed stone houses, the crystal-clear turquoise Adriatic Sea and pebble beaches.
On this peaceful pine-covered island of 24 bays and 1,400 people, visitors can taste local red wine, olive oil, tapenade and anchovies at the family-run Agroturizam Kastelanac.
To feast on grilled fish, seafood risotto and platters of prosciutto head for Konoba Nevera in Stomorska, a tiny fishing village. The studio of painter Vicko Buktenica, a man obsessed by local rural landscapes and donkeys, is also worth a visit.
Solta's only hotel is the luxury Martinis Marchi, set in a seaside 18th-century castle, but inexpensive B&Bs and apartments are available.
Getting there: Take a 25-minute catamaran or 45-minute car ferry from Split, Dalmatia's biggest city.Azores
(Portugal) 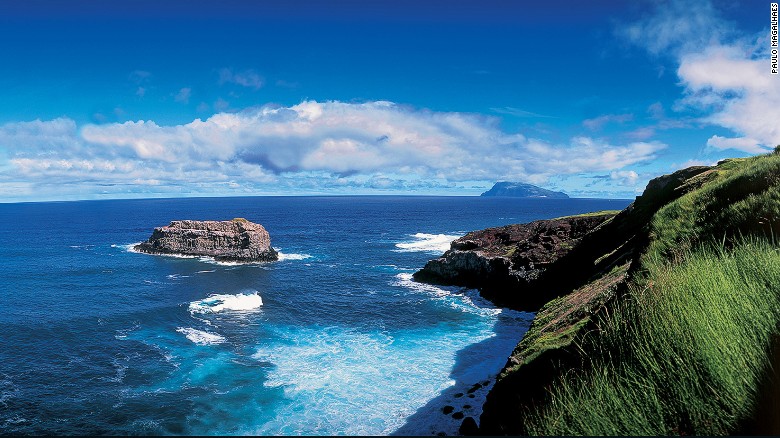 Flores is one of nine volcanic islands that make up Portugal's Azores region.
This group of nine islands in the Atlantic Ocean, 1,287 kilometers (800 miles) west of mainland Portugal, features volcanoes, blue hydrangeas, steep seaside cliffs and more shades of blue and green than a paint shop's color palette.
Turquoise-blue and emerald-green crater lakes lie side-by-side on Sao Miguel island at Lagoa das Sete Cidades.
Pico island is where Portugal's highest mountain can be found. At 7,700 feet tall (2,346 meters), Mount Pico is often shrouded in clouds.
In Faial, Horta's marina is adorned with art created by sailors from all over the world.
Flores is filled with colorful flowers — hence its name — mountains, crater lakes and waterfalls.
Getting there: Take a four-hour flight from Boston, Massachusetts on Azores Express, or a two-hour flight from Lisbon, to Ponta Delgada on Sao Miguel island. Inter-island flights and ferries are available.
Lummi Island (Washington state) 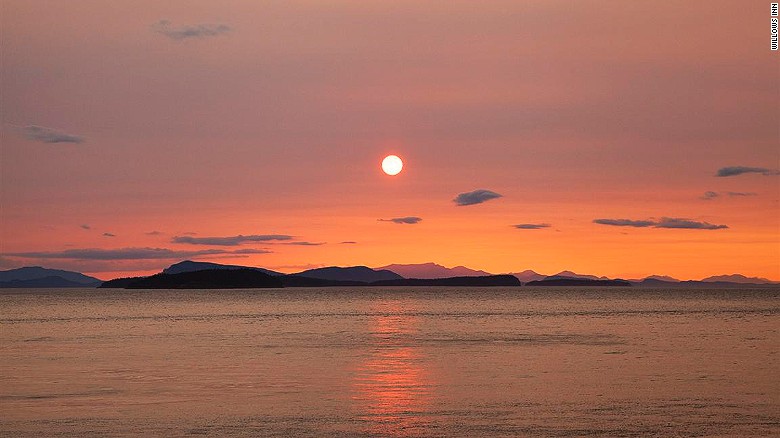 Who needs palm trees when you've got sunsets like this? Lummi is a quiet, evergreen-covered island off the coast of Washington State.
On this quiet, evergreen-covered island, 2015 James Beard Best Chef Northwest award-winner Blaine Wetzel of The Willows Inn presides over a parade of exquisite bites, all fished, farmed and foraged on the island of Lummi.
Praised as one of 10 restaurants worldwide "worth a plane ride" by New York Times in 2011, his restaurant is in Lummi's only hotel.
Even cocktails are island-sourced: A top choice is the Spotted Owl, made from Douglas fir nettles, gin and citrus.
There's a thriving artist community — open studio tours showcase more than 40 artists and craftsmen three times a year.
Energy healing sessions can be found at Tree Frog Farm, which makes flower essences and aromatherapy products.
Getting there: Take a 5-minute ride on the Whatcom Chief car ferry, which leaves hourly from Gooseberry Point, near Bellingham, a city 48 kilometers (30 miles) south of Vancouver and 145 kilometers (90 miles) north of Seattle.
Sark (Channel Islands, UK) 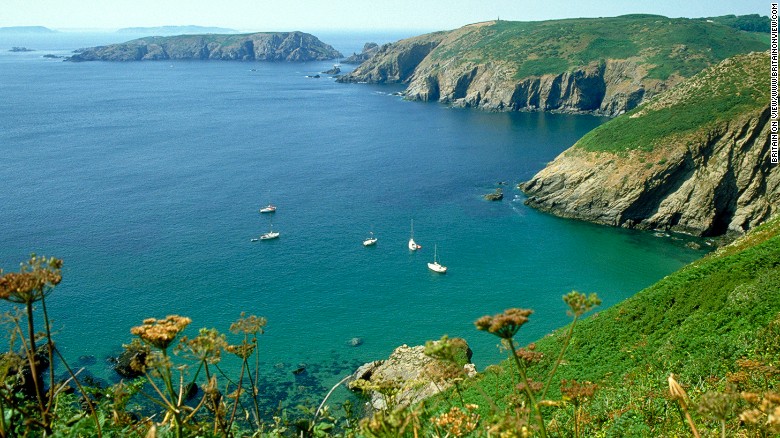 Sark, one of the UK's Channel Islands, sits about 128 kilometers south of England off the Normandy coast. Cars, buses and motorcycles are banned here, meaning visitors get to experience both pure air and quiet.
Dubbed the world's first "dark-sky island" by the International Dark Sky Association, the most rural of the five Channel Islands offers a terrific view of the Milky Way given it has no street lights or automobiles.
Cars, buses and motorcycles are banned on this island of about 600 people about 128 kilometers (80 miles) south of England, meaning visitors get to experience both pure air and quiet.
Horse-drawn carriages, bicycles and farm tractors add to the enchanting time warp.
Sark scenery includes wildflower-filled meadows, a dramatic craggy coastline and the narrow natural causeway connecting Sark to Little Sark.
Sark has only two hotels: La Sablonnerie, with an acclaimed restaurant serving local lobster and fish and its own farm, and Stocks Hotel, a former 16th-century farm in a wooded valley. There are a few B&Bs as well.
Getting there: One-hour ferries depart from Guernsey (a Channel Island) several times a day during peak season, daily in winter. Flights from the UK to Guernsey are serviced by Aurigny Air, Blue Islands and FlyBe.
Ferries from Normandy also run several times weekly in peak season.
Spitsbergen (Norway) 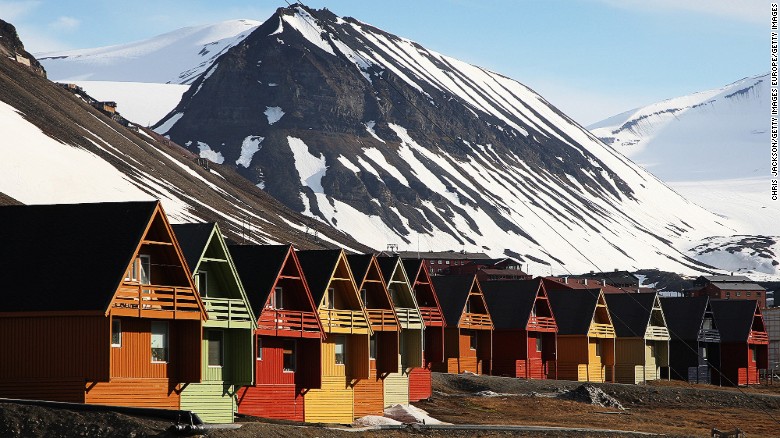 Dramatic views of snow-covered mountains, fjords, cobalt-blue seas and electric-blue ice await in the Svalbard archipelago, the northernmost settled land in the world.

About midway between north Norway and the North Pole in the Arctic Ocean, Spitsbergen is the only inhabited island. Its biggest town, Longyearbyen, has about 2,000 people.
Wildflowers blossom in summer thanks to surprisingly warm temperatures (9 degrees Celsius), while the midnight sun offers continuous daylight from mid-April to late August.
Visitors can watch for the Northern Lights during mid-November to February, when darkness reigns.
Dog sledging in a wagon pulled by huskies, hiking and sea kayaking are popular summer activities. In winter, visitors can snowmobile, ski, dog sled and take glacier treks.
The atmospheric Basecamp Hotel in Longyearbyer has rooms furnished like a trapper's cabin, complete with sealskins, driftwood and slate. Its glass-roofed bar offers mountain views.
Getting there: Take a three-hour flight from Oslo to Longyearbyen on SAS or Norwegian, or a one-hour 40-minute flight from Tromso on SAS.
Tags
Azores Channel Islands Croatia islands Lummi Island norway Portugal Sark Solta Spitsbergen UK Washington state

Match schedule for the FIFA World Cup Qatar 2022 on Thursday