Republican senators signaled tentative support for additional Ukraine aid that the Biden administration has requested following a classified briefing on Monday night, though senators are expected to nix other top White House priorities from the upcoming stop-gap bill to keep the government open.

The Biden administration has asked for $12 billion in aid to Ukraine to be added to the continuing resolution that’s needed to keep the government open past September 30.

Cross-party support is essential because at least 10 Republican votes would be needed to break a filibuster attempt.

makeup of a package for Ukraine, but that it would be about $11 billion which could include humanitarian, economic and military assistance.

The deliberations come at a critical time in Russia’s war in Ukraine. US officials broadly view Ukraine’s recent momentum as evidence that the types of weapons and intelligence that the West has been providing to Ukraine in recent months have been effective.

Democratic Sen. Chris Murphy of Connecticut, who sits on the Senate Foreign Relations Committee, said Monday that he expects Congress to approve Ukraine military aid in the continuing resolution but is worried GOP support for Ukraine could corrode in the future.

“I think there’s going to be long term erosion of Republican support for Ukraine aid. I think President Trump’s decision to attack Ukrainian aid — and attack Republicans who support it — is going to have an impact,” Murphy told CNN.
“We will have enough to get this aid across the finish line on the continuing. But the long-term trajectory of Republican support for Ukraine is really menacing. What does that mean? It means that if Republicans win a majority in the House and the Senate, I don’t think you can count on Congress continuing to support Ukraine.”

Some context: Since the beginning of the conflict in February, the Biden administration has taken an incremental approach to providing arms to Ukraine — in some cases, later agreeing to send weapons that earlier in the conflict would have been deemed far too escalatory.

Its calculus has largely been based on avoiding systems that might be seen by Russian President Vladimir Putin as too provocative, although those lines have moved over time and been criticized by some former officials as arbitrary. 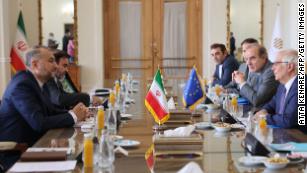