Aftershocks rattled survivors of deadly Japanese earthquakes, nearly a week after the first one struck, as the area braced for heavy rain later on Wednesday and the possibility of more landslides.

Rescuers using backhoes and shovels to dig through crumbled houses swept away in a landslide found a lifeless woman, one of several people still missing, taking the toll of dead to 47.

Hundreds of people in the Kumamoto area of southwestern Japan spent another night in their cars, afraid to return to damaged houses.

Medical experts warned of the danger of potentially fatal blood clots from sitting too long in cramped conditions — so-called economy class syndrome — after a 51-year-old woman died and at least 12 people were hospitalized because of it.

Eleven people appear to have died of illnesses related to their prolonged stay in evacuation centers, NHK national television said. The first quake hit late on April 14 and the largest, at magnitude 7.3, some 27 hours later.

"I keep thinking the earthquakes will stop, but they just go on and on," one woman at an evacuation center in Mashiki, one of the worst-hit areas, told NHK.

A 5.5-magnitude quake hit on Tuesday night. Of more than 680 aftershocks hitting Kyushu island since April 14, more than 89 have registered at magnitude four or more on Japan's intensity scale, strong enough to shake buildings.

Nearly 100,000 people are in evacuation centers, some huddling in blankets outside as night temperatures fell as low as 8 Celsius or queueing in long lines in the sun and 25C heat for bowls of noodles, their first hot food in days.

Heavy rain is expected over the area — 120 mm for Wednesday and early Thursday — raising fear that slopes weakened by the quakes could collapse.

Authorities have begun condemning buildings and other structures deemed unsafe. Hundreds, possibly thousands, of buildings collapsed, many brought down by their heavy roofs of traditional tiles.

Though public buildings must abide by stringent safety standards, the law is lax for private homes.

"When a big earthquake hits, structures may sustain damage that's impossible to fix if there's another quake within days," said Akira Wada, professor emeritus at Tokyo Institute of Technology.

Most of those who were killed had returned to their homes after the first quake. 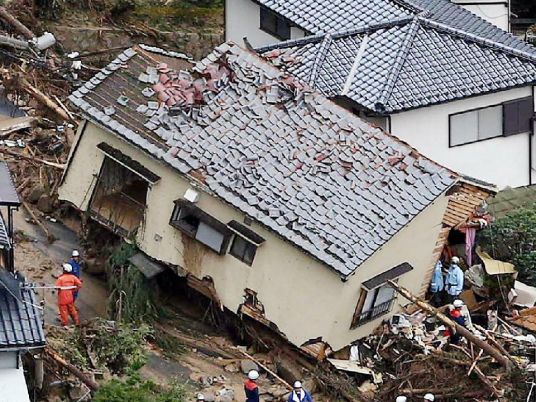