Three people were killed and four others wounded Sunday when a two-story apartment building in Alexandria’s Karmouz district abruptly collapsed.

Preliminary investigations revealed that a demolition order had been issued for the building in 2006. Building residents challenged the order at the time, however, and insisted on staying in their apartments at their own risk.

Rescue teams managed to save four residents that had been buried under the rubble after the building collapsed.

Investigators that inspected surrounding buildings in the wake of the tragedy found that eight of them were also at risk of collapse. They ordered that the tottering structures be evacuated immediately.

At least five killed after a building collapses in Iran, leaving 80 people trapped 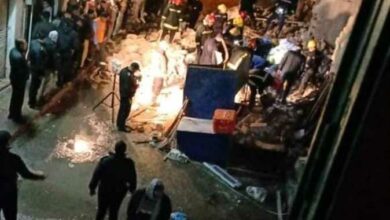 Building in Alexandria collapses due to bad weather, kills passerby