Egypt’s Supreme Council of Antiquities (SCA) on Sunday announced that excavations led by the Austrian Archeological Institute in Cairo and Vienna University’s Institute of Egyptology had discovered an ancient seal dating back to the Babylonian era.

The seal, inscribed with cuneiform writing typical of the Sumerian and Babylonian empires, was discovered in the Tel el-Dabaa area some 120 km north of Cairo.

According to SCA Secretary-General Zahi Hawass, the seal could very well date as far back as the reign of Babylonian King Hammurabi (1792-1750 BC), known for his seminal law code.

"It’s the second kind of official seal to be discovered recently," Hawass explained. "Another one, belonging to Hyksos King Khayan (1653-1614 BC), was found last year."

Mission director Manfred Pitak said of the recent finds: "These two Babylonian seals are of great archeological significance since they are 150 years older than similar ones unearthed in Tel el-Amarna, Egypt’s capital under King Akhenaton, who was the first pharaoh to call for monotheism."

Pitak added: "The first seal confirms that the Hyksos enjoyed commercial relations with ancient Near Eastern civilizations as far away as Babylon."

According to mission officials, an ancient palace — dating back to the Hyksos era and containing several rooms and courtyards — was found in the same area in 2006.

SCA spokesman Muhammad Abdel Maqsoud announced that the council was currently considering plans to build a museum in Tel el-Dabaa, the Hyksos capital, owing to the many archeological finds to be discovered there throughout the years.

Egypt put ‘Red List’ for smuggled antiquities to be retrieved

Nefertiti, the confused Egyptian queen between her original homeland and her German residence 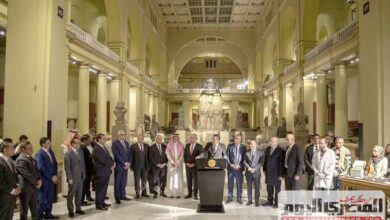