Former California Gov. Arnold Schwarzenegger made an impassioned appeal to the Russian people in a video posted on social media, asking them to resist their country’s disinformation as the devastating invasion of Ukraine continues.

Schwarzenegger said he was “sending this message through various different channels” for Russian citizens and soldiers, and hoped his message about the atrocities committed by its government and military would break through. The video posted on Twitter has more than 16 million views.

“Ukraine did not start this war. Neither did nationalists or Nazis,” he said. “Those in power in the Kremlin started this war.”

Russian President Vladimir Putin and government officials have made false accusations toward Ukraine as their motivations for the invasion, baselessly saying the country must “deNazify.”

He heavily criticized the Russian government for the invasion, saying they “lied not only to its citizens but to its soldiers” for the reasons behind the war. 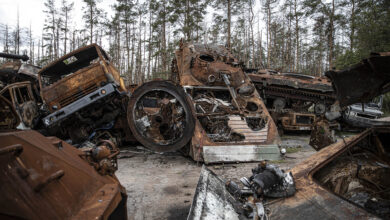