A certain miserable set of circumstances have sent Nevine El Shabrawy back in time to the world of car-less-ness – the world of the Cairo-street taxi.

Now, things have developed greatly since my days as a cab taker. There are black and white cabs, yellow cabs and white cabs – a whole bumblebee of choices and different means of finding them.

The yellow ones can be called – or so you think – but are available at random and one may be in your area by chance at one moment but at another, you may not be able to access a yellow cab before a couple of hours. “I no longer depend on the cab companies,” claims Sarah George, a regular cab taker from Zamalek, “there’s no guarantee one will ever show up at all, much as well on time.” Another interesting phenomenon is the ‘Cab Company Set of Multiple Realities’. Due to an inability to get permission for a radio frequency and the lack of proper GPS technology, the only way for the company to reach one of their drivers is by regular mobile phone. This causes confusion and, as a result you may be communicating with up to 4 separate people from the company at a time, each giving you a different update on your cab situation.

The white cabs are a different phenomenon – they are regular cabs that have signed a deal with the government in some effort to get the old crummy cabs off the streets. The deal goes as follows – they give their car in and receive 5,000 LE for it – no matter its make or its condition. They then choose from a number of different car makes with varying installment rates, ie: Lada (yes, the same look, the same workmanship, just a ‘new’ car) goes for around 400 L.E. per month (according the Ayman, the cab driver) and the Esperanza requires a monthly installment of 1,200 L.E. (according to Ashraf, the cab driver).

“Zalamouna,” complains Ayman, a white-car taxi driver based in Nasr City, in reference to the 5,000 L.E., “but otherwise, it’s a great deal. The advertising helps pay our installments and we get the new cars at lower prices, minus sales tax.” In fact, there seems to be consensus that the new cars are a good idea. “People look for us in the street,” explains Ashraf, a white-car taxi driver in Garden City, “so, thank God, it helps our work. And with the heat this summer, it’s a real treat to be driving around with AC.”

Ibrahim, a white car cab driver from Maadi, has one complaint; “We can only fix our cars at the tawkil (the official car company). They’re thieves!”

And why are the majority of cabs still black and white with fake seatbelts and little skulls on the door locks if the world of the white-only cab is such a blessed one? When asked if he was dreading giving up his car for 5,000 L.E., Hazem, the black and white taxi driver from Maadi, was quick to reply, “No – the advertising deal covers 35,000 L.E. of the installments. They should take it and destroy it, this horrible car, but it’s a model ’84 and my turn hasn’t come up yet. They’re only taking cars with model years up to 1980 for now.” 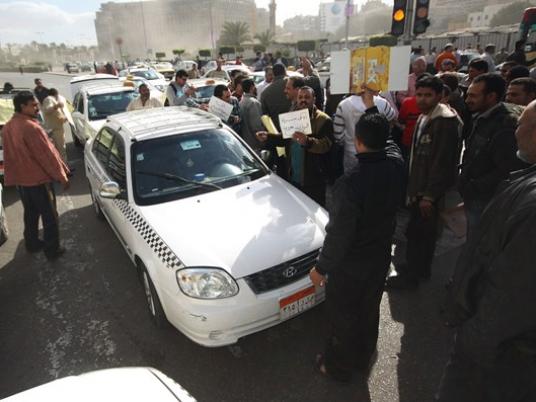