Facebook Twitter LinkedIn
Editor's note: CNN columnist John D. Sutter is reporting on a tiny number — 2 degrees — that may have a huge effect on the future. He'd like your help. Subscribe to the "2 degrees" newsletter or follow him on Facebook, Twitter and Instagram. He's jdsutter on Snapchat. You can shape this coverage.
A 7-year-old's sneakers. An accountant's slippers. Gold heels with spikes and a piece of paper carrying a message: "Invest in renewable (energy) … now."
Thousands of shoes stood in silent protest on Sunday in Paris.
Their owners, climate change activists who have descended on this city for a major UN climate summit that starts Monday, were banned by authorities from holding mass marches because of security concerns after the November 13 terror attacks, which killed at least 130 people.
But activists didn't let that stop them from making their message heard.
"The shoes are marching for us," one Parisian man, René Stroh, told me.
I came upon the display, which had the feel of a public art instillation in front of the Place de la République, not far from the site of the recent shootings. It was the perfect, somber response to the ban on mass protests ahead of the COP21 UN climate change talks. Handwritten messages on the shoes called for the world to abandon fossil fuels and avoid the most disastrous impacts of climate change. 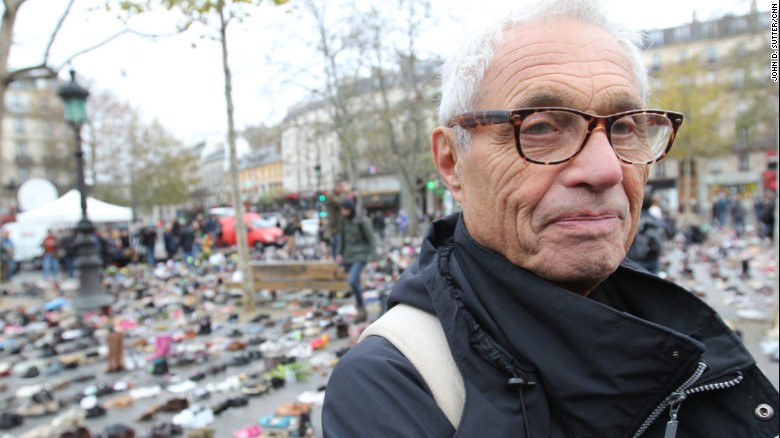 "The shoes are marching for us," said René Stroh of Paris.
The shoes asked dignitaries — 140 of whom, including US President Barack Obama, will be here for the summit — to consider their children and generations that will inherit this planet from us. A troupe of Australian women dressed as "climate angels" walked speechlessly through the rows of shoes, underscoring the gravity of both the recent terror attacks here and the persistent threat of climate change.
"It's important not to stay too sad," said Murielle Ellert, a 38-year-old accountant whose shoes were among those on display. "We have to continue to live exactly like we did" before the attacks.
While banned in Paris, the site of the UN climate meetings, mass protests demanding climate action did continue around the world. They had been planned in locations as diverse as the United Kingdom, Senegal, Australia, Mexico, Brazil, China, South Africa and Ukraine.
As I've argued before, climate change is a form of terror, only one that's playing out over the long term, and one we're perpetrating on ourselves.
We shouldn't ignore threats from ISIS and other extremists, and we must take time to honor the victims of the terror attacks in Paris and Lebanon, and to respect the lives that will be forever changed by their absence. But climate change is deserving of our attention as well.
Left unchecked, it promises to drown low-lying countries such as the Marshall Islands; melt communities such as Shishmaref, Alaska, out of existence; push countless species toward extinction and millions of people into poverty; and intensify droughts such as the one researchers say helped destabilize Syria pre-ISIS.
The COP21 talks — the policy-wonk name for the 21st meeting of the Conference of Parties to the UN Framework Convention on Climate Change — are our best chance to do something about this crisis.
"COP22 is going to be too late," said Cedric Mast, a 28-year-old Parisian.

Silent #ClimateMarch in Paris. Moved nearly to tears by this. No marches b/c terror attack. #COP21 #2degrees pic.twitter.com/QWiGxeMLLX

The display of shoes at the Place de la République, which was organized by a group called Avaaz, gave way around noon to a "human chain" of activists that stretched down Boulevard Voltaire and up to the Bataclan, the music venue where so many were shot and killed.
"We were in a state of emergency before the attack, and we will still be in a climate state of emergency after the attack" because of climate change, said Eros Sana of 350.org, a climate activist group that helped organize the human chain. "We decided to do something that is not a banned demonstration."
Along the chain, I met a woman dressed as a clown and wearing goggles and a snorkel ("We know the water is going up and we are ready," she said in a French accent), as well as Helene Hohmeier, a 53-year-old woman wearing a polar bear hat ("The ice is melting. It's very urgent to do a lot of something"). Corentin Leblanc, a 20-year-old wearing a stocking cap and a massive backpack, pulled me aside to say he'd walked 600 kilometers (373 miles) from The Netherlands to Paris for the demonstration.
The show of solidarity was respectful and moving. It effectively conveyed a reverence for the tragedy that still cloaks this city and the urgency with which we need to act on climate change.

"The ice is melting. It's very urgent." -Helene Hohmeier 53, woman with polar bear on her head. #ClimateMarch #cop21 pic.twitter.com/3eMm1VdUv6

I was saddened, however, to see protests become heated later in the day.
After the silent-shoe demonstration and the human chain had dispersed, by about 1 pm, a group of activists that 350.org claims are "unaffiliated with the climate movement" amassed on the Place de la République. They challenged the ban on marching and were met with police in riot gear who fired tear gas into the crowd. One demonstrator, a bandana pulled over his face, grabbed a CNN cameraman and tried to remove him and his camera from the scene.

They chanted for liberty and for the closing of all factories — an end to market consumerism. It all had a militant, combative tone.
I understand the emotional charge behind the COP21 climate talks. The world has waited far too long to move toward a cleaner-energy future. I'm frustrated, too. But I found the morning's silent demonstrations to be far more effective and respectful.
I hope the UN climate talks, which continue at least through December 11, will foster productive dialogue and real, substantial change. Not conflict and animosity. There's no time for that, not anymore. It's now time — during what likely will be the hottest year on record — for us to realize that we need to work together to implement solutions to this crisis.
We know what works. We're just not doing it, or not doing it nearly fast enough to avert 2 degrees of warming, which is the agreed-upon threshold for especially dangerous climate change (read more about that target at CNN.com/2degrees). 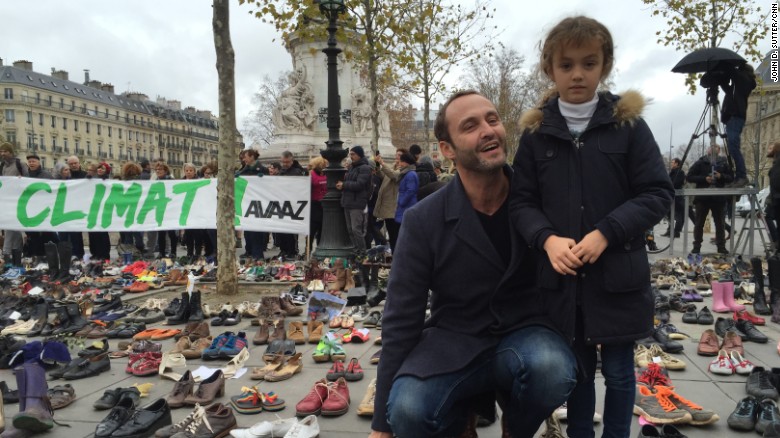 Frederic Vivenot brought his 7-year-old daughter, Chloe, to leave her pink sneakers at the Place de la République in Paris.
We owe it to ourselves and the planet to collaborate on this.
After seeing the moving display of shoes on Sunday, which included footwear sent by UN Secretary General Ban Ki-moon and Pope Francis, I remain hopeful about COP21.
The world's attention is on Paris.
The gravity of climate change is becoming clear.
Now it's time to walk together toward a cleaner future.
Tags
Paris climate change summit protests