As the national referendum on constitutional amendments, slated for 19 March, approaches, the debate over what ballot to cast is intensifying among legal experts.

Two camps are firmly taking shape. The first favors implementation of the amendments, hoping that a public endorsement of the reform measures will expedite the transitional period, send the military back to the barracks, and promptly instate civil rule. The second camp insists on the drafting of a new Constitution, a prolonging of the interim period, and a decision to not hold elections before the political sphere is ripe enough to push fresh political players to the fore.

Hossam Issa, a law professor at Ain Shams University, has recently emerged as an outspoken opponent of the recently announced constitutional changes. Issa contends voters should cast their ballot against what he dismisses as amendments to an “obsolete Constitution.”

“If the amendments are passed, the situation will become very sad because we will be reproducing Mubarak’s regime,” said Issa. “We want a new Constitution. These partial amendments are being introduced to a Constitution that has already become nil. The Constitution fell the same day power was handed over to the armed forces."

Former President Hosni Mubarak, marking a historic moment in Egyptian modern history, abdicated to the armed forces on 11 February after 18 days of massive protests demanding his departure. Shortly thereafter, the Supreme Council for the Armed Forces announced the suspension of the old Constitution and appointed a legal commission to introduce a package of constitutional amendments. The eight-member committee was entrusted with modifying a limited number of constitutional articles in order to ensure fair parliamentary and presidential elections by the end of the six-month transitional period.

Critics, however, argue no elections can be held under the current unprecedented laxity in public order. Since the eruption of the revolution, there has been a rampant state of lawlessness throughout Egypt due to the mysterious and sudden retreat of police forces since late January.

“There is no police and no safety," Issa posited. "Can you imagine holding parliamentary elections now? What would happen in light of tribalism and patronage?”

In the past, Egypt’s elections were usually marred by violence due to the involvement of both police and tribal sensitivities. Thuggery has been a common trait of Egypt’s parliamentary polls in the past, one that usually left dozens killed.

“Thugs of the [formerly ruling] National Democratic Party are still around attacking people with knives," Issa charged. "How could you hold a referendum and elections under such circumstances?”

Last week, the commission unveiled a set of proposed amendments that eased restrictions on presidential bids, ensured full judicial oversight of elections, limited the number of presidential terms to two and limited the president’s authority to employ emergency law. To appease voices calling for a new Constitution, the commission added a new article to the old document stating the new parliament should elect a commission to draft a new Constitution.

That clause, however, fell short of convincing radical voices that insist on the immediate abrogation of the old Constitution, claiming it carries the legacy of decades of authoritarian rule.

According to Tahani Gebali, Egypt’s first female judge and Vice-President of Egypt’s Supreme Constitutional Court, this particular clause is “the most perilous” amendment.

“This clause took away the right of people to elect the commission and gave it to the parliament. This only happens in federal countries,” said al-Gebali, who plans on casting a no-vote.

But professor of philosophy of law with Zagazig University, Mohamed Nour Farahat, argues that, although the amendments may not be ideal, casting a no-vote might complicate the situation.

“Although I have reservations over the amendments, I believe that voting in disfavor of them will send us into a vicious cycle,” Farahat said. “I am afraid that a ‘no-vote’ will be interpreted as if people approve of the 1971 constitution as is."

Former President Anwar Sadat in 1971 drafted the current Constitution claiming it paved the way for a democratic presidential system along French lines. Yet in practice, that Constitution concentrated powers in the hands of the president at the expense of parliament and the judiciary. To placate Western pressure to democratize, Mubarak amended the constitutional mechanism of selecting the president in 2005. The amendment ostensibly paved the way for Egypt’s first multi-party presidential elections. With the draconian eligibility conditions still in place, however, candidates that did not belong to the erstwhile ruling party were excluded.

“If compared to the old constitutional order, the proposed amendments mark a step forward,” said Farahat. “But, I am not calling upon people to accept or refuse these amendments. I am just asking for the postponement of the referendum for few days until we have a genuine national dialogue over the matter.”

Such a dialogue may require a longer transitional period–a demand raised by many intellectuals and politicians. Some hold that the interim phase should last for a year and a half.

“During that period, we can draft a new Constitution, open all doors for liberties, lift all restrictions on parties and syndicates. Eventually, new parties will be formed and new faces will emerge,” said Issa, echoing the concern of many liberal politicians who fear that early elections will culminate in a parliament dominated by Islamists and the remnants of Mubarak’s National Democratic Party.

For three decades, Mubarak’s regime had besieged political parties and civil society with an arsenal of restrictive laws and a notorious state security apparatus. Most observers agree that only two political forces could defy such conditions: the NDP by virtue of being Mubarak’s party and the Muslim Brotherhood–due to their resilient grassroots efforts at mosques throughout the country.

In the wake of Mubarak’s ouster, hopes of other parties to develop a strong support base in a free political environment are on the rise. If elections are held within the next few weeks, party leaders fear they will not be able to garner any seats after decades of political weakening.

“Parties need many years to strengthen themselves," Atef al-Banna, one of the architects of the proposed amendments, said. "Is it possible to put political life on hold for years?”

Al-Banna, professor of constitutional law at Cairo University, goes further to dismiss claims that Islamists or NDP members will emerge as the only beneficiaries of early parliamentary elections.

“The NDP will not get more than 20 seats," predicted al-Banna. "The NDP needs years to reshape itself. The nation that made this revolution should not be scared of the remains of the NDP. As to the Muslim Brotherhood, they remain a minority. They can only get between 20 and 25 percent of the seats. Even if they get 30 percent, they will not constitute the majority.”

Al-Banna contends voting against constitutional modifications may hinder the transition to a democratic civil rule.

“These people [opponents] want to halt democratic life and they support military rule,” says al-Banna, invoking the fears of many liberals that the extension of the military mandate beyond the sixth-month transitional period might thwart efforts to instate a fully civil rule in Egypt for the first time since 1952.

Although the armed forces affirmed their commitment to withdraw completely from politics and hand power to a democratically elected government by the end of the transitional period, skeptics still fear the recurrence of the 1952 scenario when military officers eventually ascended to the helm of the Egyptian state.

Ain Shams' Issa offers a middle ground solution that could avoid the monopolization of power by the military during a longer interim period. Until a new president and a new parliament are elected, a presidential council consisting of three civilians and two military representatives could govern, Issa suggests.

Such an alternative pathway still elicits an array of questions. Who will draft the new constitution? How would this presidential council be elected if elections are difficult to hold anyway?

Issa tries to address these questions by insisting a constitutional commission should be elected, ruling out that such a poll would be marred by violence.

“Such elections will not be governed by tribalism and candidates will not have the same lust for victory as is the case with parliamentary elections,” he said.

As for the presidential council, Issa says, elections are not a safe option.

“It will be hard to hold elections for every post…the army has hundreds of popular names that it can choose from,” says Issa. “[The hundreds] of martyrs who died in the revolution did not lose their lives for the sake of amending few articles in the constitution.” 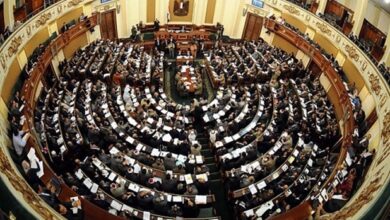