Amid an approaching freshwater crisis, the first “EU-Egypt Water Cooperation Days” conference was inaugurated on Wednesday, by the European Union Ambassador to Cairo Ivan Surkoš, and the Egyptian Minister of Water Resources and Irrigation Mohamed Abdel-Ati.

The conference, held October 17-18 in conjunction with “Cairo Water Week”, gathered several ambassadors and business leaders to discuss their efforts to foster water security, and reach solutions to improve water services across Egypt.

Such parties include the ambassadors of Germany and Italy, as well as the Confederation of Egyptian-European Business Associations.

On the first day, the conference “addressed means of fostering public-private partnerships in the water sector, especially with the launch of the EIP, as well as discussing the role of the private sector in the industry through sharing success stories of joint projects,” according to a press release issued by EU.

On the second day, “a platform for dialogue was held to discuss strategic issues in the field of water and how to deal with them; for example, integrated investment planning and decentralization.”

Water crisis, ‘A top priority for the EU’

Surkoš stressed the Egyptian water sector as a top priority for the EU, given that the increasing population of the country has taken its toll on water resources.

Consistent with his warning, a study has named Cairo as one of the 11 likeliest cities to run out of drinking water, due to untreated agricultural and residential waste, the BBC reported in February.

The previous year, in March, Housing Minister Mostafa Madbouly, current prime minister of Egypt as well, announced that Egypt had entered the “water poverty” phase, and that the annual amount of water supply per person had fallen to 700 cubic meters, compared to the global average of 1,000 cubic meters. 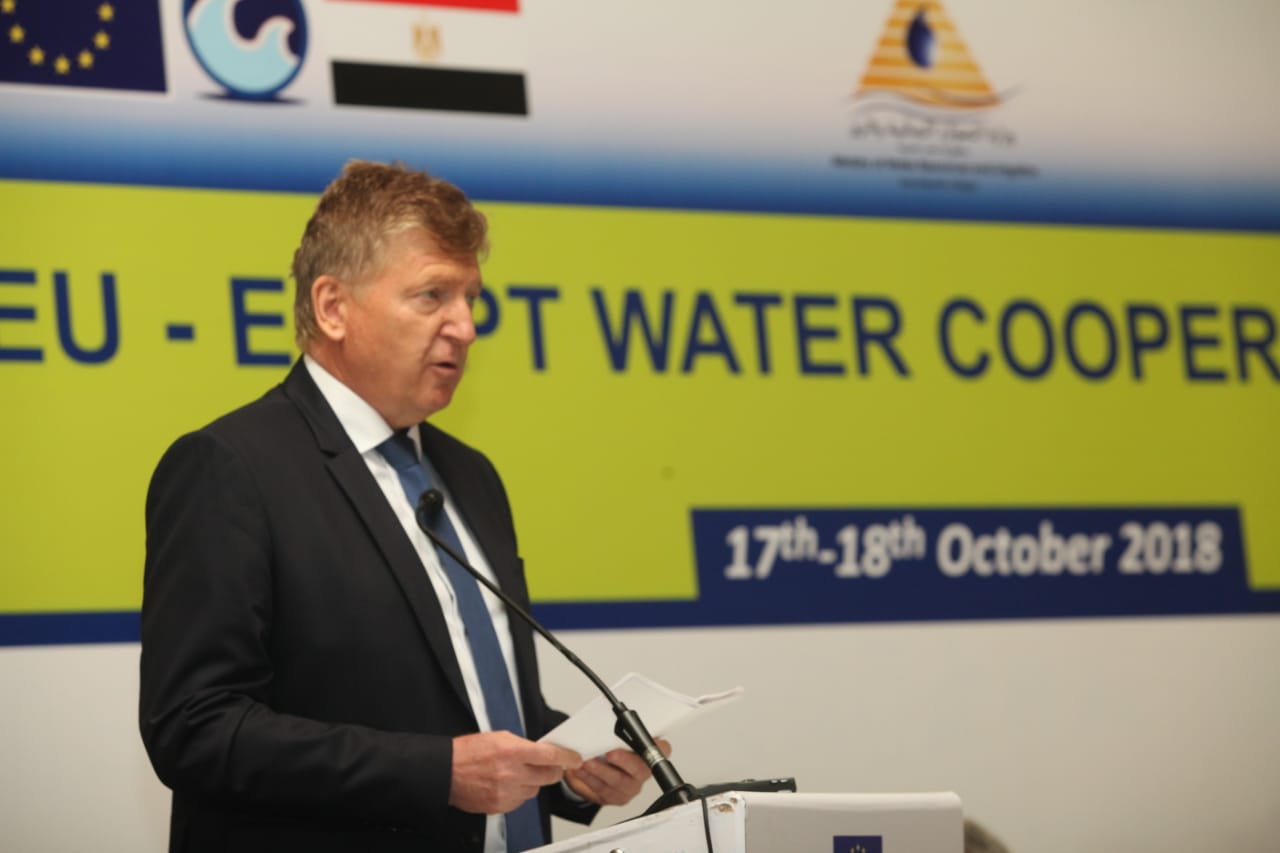 The EU was one of Egypt’s initial supporters in this sector; it provided the latter 450 million Euros in grants over the past decade, for various water sectors. 10 percent of this amount was invested in building wastewater infrastructures, according to the head of the EU delegation to Egypt.

“The cooperation between the EU and Egypt in the water sector includes programs covering 12 Egyptian governorates. These programs would improve the lives of 12.5 million Egyptians – about one-third of the population of these governorates – targeting the less fortunate, and most in need,” he stated.

Minister Abdel-Ati echoed Surkoš’ sentiment, describing the water issue as “vital”, given that “its security is highly connected to national security, as well as global security.”

The minister’s speech praised Europe’s role in enhancing Egypt’s water conditions, noting that “90 percent of the country’s water-related projects were implemented by the EU.”

Tremendous efforts by Italy and Germany

Italian ambassador Giampaolo Cantini also spoke at the event, announcing that the “EU WATER STARS” program, aiming to hone Egypt’s technical and administrative skills in water sustainability, was set to launch over the next 30 months.

The 5 million-Euro program would be facilitated by the Italian Agency for Development Cooperation, and Egypt’s Ministry of Irrigation and Water Resources. It will aim to enhance the country’s own sustainable development strategy, “Egypt’s Vision 2030”.

A similar program to support Vision 2030’s sustainable development is the “EU4Water in Egypt, which is to be implemented through the next three years with an indicative budget of EUR 120 million.

“Water is a question of survival for Egypt, so it is a really significant matter that we cannot turn a blind eye to,” Ambassador of Germany to Egypt Julius Georg Luy told Egypt Independent.

“We have shown this (concern) practically in our economic cooperations on many different levels; the most recent major project was the New Assuit Barrage, where we financed two-thirds of the cost – which was 311 million euros.”

The New Assuit Barrage project is considered the biggest water project ever implemented across the Nile River, and serves as a substitute for the old Assuit Barrage, dating back to 1898. The mega project is stretched on 960 thousand hectares, in an effort to supply five governorates with irrigation water: Assuit, Giza, Beni Suef, Minya, and Fayoum.

Abdel-Ati highlighted that the government has lately made great strides to confront water scarcity, and enhance the state’s water quality, remarking that “33 percent of Egypt’s water has undergone treatment process and soon will be 40 percent.”

State investment in water treatment has reached over US1 billion, according to the minister’s statement in a press conference entitled “Promoting Sustainable Investment in Egypt’s Food Security”, in February.

The head of the EU delegation to Egypt, however, forewarned that the country still has “a long way to go”, drawing from the estimate of 45 billion Euros that Egypt would need to meet the needs of its water conditions. Consequently, Surkoš continued, there would be a dire need to come up with a broader action plan, to solve the mounting crisis.

Surkoš claimed that it will be pivotal to bring the private sector, investors, and international financial institutions together, to draw up a tangible plan for attaining Egypt’s overall strategic objectives.

“The EU has taken the first step towards establishing a successful partnership between private and public institutions by launching ‘European External Investment Plan (EIP)’ and ‘European Fund for Sustainable Development (EFSD)’.”

Additionally, a 100-million Euros program would soon see light in Egypt. Taking place until 2020, it will aim to cover “all aspects of the water sector including building infrastructures, providing technical systems, and training, and we are now searching for implementing partners,” Surkos told Egypt Independent.

He wrapped up by saying, “It is a confirmation of how we see the importance of water…we only now have a framework, timing, amount, expected goals, but we don’t have more technical details.”