When the clock strikes 4.45 am, the Luxor Temple area on the Nile Corniche gets crowded with foreign tourists coming from hotels and floats, while tour guides and representatives of balloon companies set off towards the Nile, boarding river launches heading to the West Bank, waiting for buses and cars.

They are moving in groups to the flying balloon airport near the temple of Queen Hatshepsut in Deir el-Bahari in al-Qarnah.

As soon as the groups reach the airport grounds, its yard turns into a beehive of workers in balloon companies, everyone waits for the civil aviation decision at Luxor International Airport to know the weather from meteorology.

This requires that take off at a temperature not exceeding 35C, and that the weather is free of fog and mist, so that the horizontal visibility is more than 4 km, and the wind speed does not exceed 8 knots, to protect tourists and participants in trips.

Eyes watching and heading towards (the wind vane) with the green flag on top of a building, which determines the direction of the wind, from which the path of the balloon is determined after takeoff.

The balloon worker on the ground begins to pump cold air into it and start heating the air, then the tourists climb into the box designated for them and the balloon is filled up.

The adventure journey begins amid the shouts of the participants, decorating the Luxor sky with bright colors in a creative scene and an artistic picture watched by the people of Luxor for 45 minutes of flying at a height of about 2000 feet.

The trip passes over the temples of Ramses II or the Ramesseum, Amenhotep II and the tombs of the Valley of Kings, Queens, Princes and Nobles, watching impressive landscapes, palm trees, and the immortal Nile River that embraces the mountains, crops and ancient Egyptian monuments. 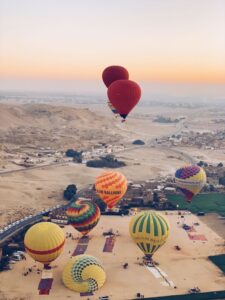 ■ History of the balloon trips in Luxor:

In 1988, the first balloon flight took off in the skies of Luxor, and it was led by British pilots who were working for the British Virgin Company, which established the first balloon company in Egypt, and the company was called “Ballonza Over Egypt”.

In 1994, the establishment of the first balloon companies began with Egyptian funding and expertise, where Hodhod Soliman Company and Sinbad Balloon Company were established, until the number of companies operating in flying balloon tourism in Luxor reached 10 companies, employing hundreds of Egyptians.

In 2019, the flying balloon was reinforced with GPS and “black box” technologies to monitor balloon flights and track their path and landing site, as part of a package of measures taken by the Civil Aviation Authority, with the aim of protecting tourists and achieving the greatest degree of insurance and monitoring of balloon flights over Luxor city.

Agamy praised the government’s support for the tourism sector, and expected Egypt’s success in achieving a lot of growth in the numbers of incoming tourism, and in the volume of tourism investments in the near future.

Ayman Abo-Zeid, head of the Egyptian Association for Tourism and Archaeological Development in the Luxor, said that the city of Luxor ranks third in the world in the rate of balloon trips and the number of tourists who board the balloon on daily trips to enjoy view of the temples of the Pharaohs, the eternal Nile River, the plants, palm trees and the picturesque nature of the city.

He added that the city of Luxor, before the Corona pandemic, witnessed about 11,000 balloon flights in its sky annually; it carried about 216,000 tourists throughout the year, and it is unique among all Egyptian tourist destinations by the presence of balloon flights flying in its sky.

Moderate weather to prevail throughout the week: EMA

Will the US dollar price exceed LE20 after CBE’s decision to raise interest rates?