The Hurghada Prosecution office in the Red Sea Governorate is investigating the burning and sinking of a tourist yacht belonging to the owner of a tourist village in Hurghada.

According to authorities, a fire broke out on the yacht while it was just south of Giftun Island in the Red Sea.

Clouds of smoke quickly covered the sky, and a rescue team was dispatched so save those aboard. 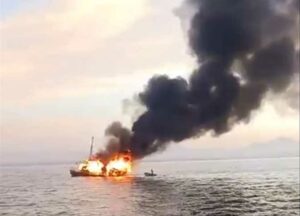 Preliminary investigations found that the yacht was carrying about eight people on a cruise, seven of whom were rescued. One person is still missing.

A video of the yacht burning and sinking was shared on social media.

Will inflation decrease in Egypt after the Central Bank’s decision?

Titanic celebrates its 25th anniversary with 40 screenings in Egypt