In April 2015, on the 45th anniversary of an Israeli massacre of 46 Egyptian children at Bahr al-Baqr Primary School, Egypt’s Syndicate of Journalists hosted the launching conference of the BDS Egypt movement.

It was a response to the Palestinian call for Boycott, Divestment and Sanctions against Israel, 10 years earlier.

Over 170 Palestinian NGOs and political parties had urged these forms of nonviolent pressure on Israel until it complied with three demands: ending its occupation of Palestine and the Golan Heights, allowing Palestinian citizens of Israel full equality, and allowing Palestinian refugees to return to their homes as per UN Resolution 194.

Today, Egypt is one of over 40 countries with active BDS campaigns and as a wide-reaching movement on such a critical issue it has generated a storm of debate. 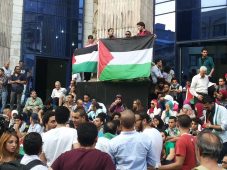 EI: Could you start by explaining the essential purpose of this movement?

BDS Egypt: Israel is an apartheid state that feeds off concentrating the entirety of its wealth and privileges to a predetermined ethnicity, at the expense of everyone else. This is not only inhumane, but also incredibly counterproductive. And much like the brutal Israeli occupation targets all aspects of the Palestinians’ lives, so too must the resistance.

This is where the Boycott, Divestment and Sanctions movement comes in.

The BDS movement is one of the most effective paths for the struggle against Zionism, and an essential expression of solidarity with the Palestinian people. It works to isolate Israel, and cut off its stretching arms that marginalize, imprison, torture and kill those who don’t adhere to their vision.

That’s why we call on people from all walks of life in every corner of the globe to boycott Israel – not only economically, but equally as important, culturally, academically and politically. We call on foreign companies operating in occupied Palestine to end their involvement by divesting. And finally, we call on states and international institutions to impose sanctions on the illegal state of Israel.

EI: But why should BDS matter to Egyptians?

BDS: As a state that is constantly expanding to occupy territories and resources in order to dedicate them to a select few born into a particular ethnicity, Israel is a massive threat to the fight for equality and social justice all over the world. In this day and age, we simply cannot allow for racial segregation and brutal oppression.

BDS Egypt is therefore not just in solidarity with the Palestinian people, but actually a movement reflecting our interests as humans, longing for freedom and social justice for all.

EI: What is your most recent campaign?

BDS: Strategically, our “ZIM out of Egypt” campaign, against the Israeli shipping line “ZIM”, is our current main campaign and aims to end all of its work in Egypt through urging shipping, freight-forwarding, import and export companies to boycott this shipping line.

Meanwhile, we are also trying to persuade Zamalek Football Club to terminate its contract with Puma, which wants to design and produce the team’s T-shirts. This is part of the international campaign to boycott Puma until it ends its sponsorship of Israel’s national football team.

EI: Have ZIM’s clients and Zamalek been receptive to these campaigns?

BDS: For Zamalek’s campaign we asked their fans, and Egyptians in general, to announce their solidarity by photographing themselves with a sign calling for the boycott and sharing it with us.

Within three days, we received dozens of photos, many of them from fans of the team. In the meantime, we’ve opened an indirect communication channel with the Zamalek board.

As for “ZIM Out of Egypt”, since May we have contacted dozens of shipping and freight-forwarding companies and faced no difficulties in securing their commitment to stop business with ZIM, wherever there was any. We still have a lot of companies to call, but soon, we hope to announce a list of dozens of companies who pledge to boycott ZIM.

EI: Are there Egyptian equivalents to the illustrious names supporting BDS in the West, like Stephen Hawking, Archbishop Desmond Tutu, and Roger Waters?

BDS: The Egyptian Popular Campaign for the Boycott of Israel (BDS Egypt) is comprised of more than 10 political parties, student unions and movements, syndicates, NGOs and over 300 public figures.

BDS: They include ex-presidential candidates Hamdeen Sabahi and Khaled Ali, ex-Deputy Prime Minister Ziad Bahaa-Eldin, and politicians like Amr Hamzawy, George Ishak, and Gamal Eid. From the media, we have names like former Journalists’ Syndicate Head Yehia Qalash and Bassem Youssef, and actors Kal Naga, Basma, and Amr Waked, or the music band Like Jelly to name a few. 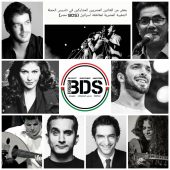 EI: Since your launch in 2015, what would you consider BDS Egypt’s greatest accomplishment? Or is it too early to tell?

BDS: Actually, our greatest accomplishment came just a few months after our launch in 2015, when we succeeded in compelling Orange to end its partnership with its local Israeli agent. This great victory was possible thanks to strong coordination with other BDS groups in France, Palestine, Morocco, Tunisia, Jordan and South Africa.

As for this year, the Israeli Embassy in Cairo announced a conference to celebrate the 70th anniversary of the establishment of the state – in the Ritz Carlton Hotel, Cairo. For the first time, they sent invitations to hundreds of Egyptian political and public figures, and we led a joint campaign with our own Egyptian political and popular forces to protest this scandalous event.

As a result, the President of the Egyptian parliament, alongside the President of Egypt’s Journalists Syndicate, warned their members against attending this conference. These official stands against normalization, and the resulting absence of Egyptians at the event were a real victory, especially given today’s circumstances.

Finally, in August, inspired by our campaign against ZIM in Egypt, TACBI (the Tunisian Campaign for the Academic and Cultural Boycott of Israel), in coordination with the Tunisian Labor General Union, succeeded in preventing a ship owned by ZIM from entering Tunisian waters and unloading in the Tunisian port of Radès. Since then, there have been no more ZIM ships heading to Tunisia. This is definitely our latest indirect success as BDS Egypt.

EI: How about your accomplishments as a global movement?

BDS: Internationally, boycott movements have become a real threat on the occupation through exposing Israel’s crimes and apartheid policies and building pressure to end them.

In the last year alone, the Irish and Chilean parliament passed laws to boycott the occupation’s products, and Argentina’s national football team canceled a friendly match with Israeli football team as a response to international boycott calls. Airbnb company decided it would no longer profit from most illegal Israeli settlements, and Adidas ended its sponsorship of the Israeli football team. Shakira and Lorde cancelled their concerts in Israel, while Lana Del Rey and 18 others withdrew from Israel’s Meteor Festival. In the UK, Leeds University and Quakers church cut their ties with companies profiting from the occupation.

These are but a few of the many victories the movement has had worldwide.

BDS: Technically, in Egypt and the Arab world claims of anti-Semitism are not workable, as we ourselves are originally Semites.

EI: How about those who claim boycotting Israeli commerce and culture is counterproductive to reaching a solution?

BDS: We do sometimes face the argument that we must not mix business and political issues together. This is unfortunately the result of years of normalization campaigns, facilitated by institutions in the media and elsewhere. The best answer to this would be the example of the successful boycotts which led to the end of the apartheid regime in South Africa.

No colonial state in history let go of its colonies by choice. There won’t be any solution so long as Israel keeps benefiting from a special status that allows it to blatantly violate international law, and get away with it. Rewarding Israel by developing business with it is definitely not the solution. At this level, only boycott, divestment and sanctions by the international community can be productive.

EI: Will nonviolent tactics like these be enough to end the Israeli occupation?

BDS: Israel’s occupation goes way beyond military invasion, and in fact spreads through every aspect of people’s lives. That is why the resistance needs to be responsive on every front.

When, for instance, Israel claims hummus is Israeli, to steal an existing identity and try to wipe Palestinian heritage, we need to remind the world of Palestinian recipes and locally-sourced ingredients. When Israel uproots century-old olive trees in an attempt to destroy the people’s history, planting olive trees is a fight against the occupation within itself. Likewise, when Israel profits immensely from the occupation, it is our role to use our collective purchasing power to bring down Israeli corporations and weaken its economic grip. And when Israeli artists and academics fail to receive recognition anywhere in the world, this weakens their influence, and isolates the occupation.

Every single hit to the occupation, across all aspects of our lives, weakens the Israeli regime and brings us a step closer to freeing the world of Zionism altogether.

However to begin with only the Palestinian people can answer this question, and we – BDS Egypt – support all the Palestinian people’s choices in their struggle to end the occupation. It is worth noting that Palestinians have never followed violent tactics except in cases of self-defense, which is legitimate in accordance to international law, especially given Israel’s insistence to use excessive military force.

EI: If somebody were interested in joining your movement, where would you tell them to start?

Surveillance cameras to be installed across Luxor City