Jackie Chan was named Singapore's first celebrity anti-drug ambassador on Thursday and the kung fu movie star sought to warn the city state's youth off illegal substances as he spoke of his son's drug crimes.

The Hong Kong actor's son, Jaycee Chan, was released from a Chinese jail in February after serving a six-month sentence on drugs charges.

He had been formally charged last year with "the crime of sheltering others to take drugs" after testing positive for marijuana and police saying they had found 100 grams of the drug at his Beijing home.

"I would never think it would happen to my family. The day I found out, I am so ashamed, I am so angry. How (did) that happen?" Chan said. "I was very angry but it made me more determined to be against drugs."

Chan, named an anti-drug ambassador by Beijing in 2009, sought to deter youths who had gathered to see him at the Singapore event from involvement with drugs.

"Don't ever think you won't get addicted, because not only are you hurting yourself … your one drug addiction will hurt your family," the actor said.

The younger Chan, a 32-year-old actor and singer, apologized for his actions upon his release. The use of ketamine and methamphetamine has increased in China in recent years and Beijing continues to heavily prosecute marijuana use. 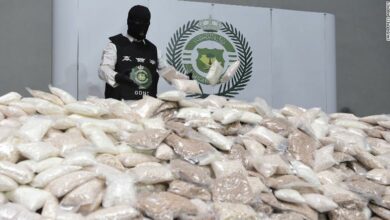