In addition to the fatalities, 300 others were injured, the health ministry said.

A towering plume of smoke rose over the Afghan capital as emergency vehicles sped toward it. Soldiers in fatigues stood with guns drawn — the sounds of screams, blaring sirens and traffic piercing the morning sky.

Bystanders lifted wounded people from the back of cars as others hovered nearby as if in a daze, blood streaming down their faces. Mangled, burning cars stood nearby.

German embassy officials injured
The blast was caused by a suicide attack, according to Najib Danish, a spokesman for the interior ministry.

It hit about 400 yards from the German Embassy, and was in a water delivery truck, according to journalist Jennifer Glasse.

German Foreign Minister Sigmar Gabriel said the attack was in the “immediate vicinity” of the nation’s embassy.

“The attack was aimed at civilians and those who are in Afghanistan to work with the people there for a better future of the country,” Gabriel said. “In the attack, officials of the German embassy were also injured. In the meantime, all employees are safe.”

Glasse said the Afghan presidential palace and the Indian Embassy are also nearby.

The US Embassy said “a large vehicle borne improvised explosive device” detonated near the southern edge of the diplomatic area.

“The US Embassy does not appear to have been the target of the blast,” a spokesperson said, and referred questions on casualties to the Afghanistan government.

Wall Street Journal reporter Jessica Donati said a vehicle packed with explosives detonated close to the green zone entrance. It injured one employee and shattered windows in the newspaper’s bureau, which is in the most fortified area and requires passing through several checkpoints to get there, she said.

The blast hit when everyone was going to work, and occurred on the first few days of the holy month of Ramadan, which started Friday. 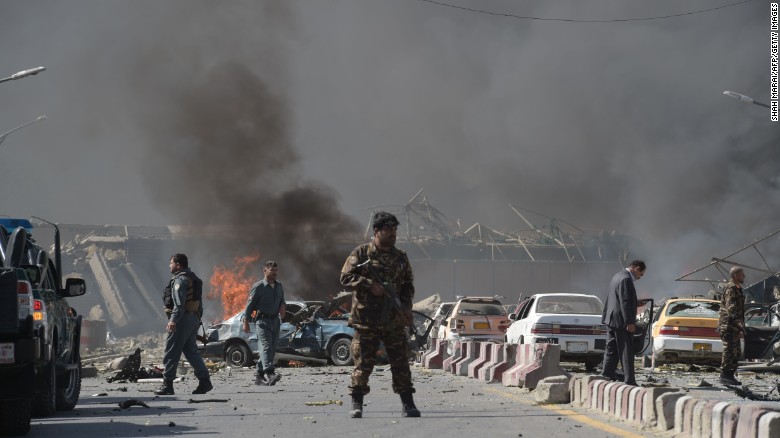 “A lot of people come into this part of the city to work in embassies or at the military base,” Donati said. “I was lucky because I was in the shower at the time.”

The green zone houses western embassies, government institutions and the residences of high-ranking officials and their families.

This month, another attack targeted a convoy of foreign troops near the US Embassy in Kabul, killing eight people. IS claimed responsibility for that attack.

The Pentagon is considering sending additional troops to the country, US military officials told the Senate Armed Services Committee this month.

The troops could consist of special forces personnel and more conventional soldiers, and would be part of the NATO-led mission to train, advise and assist the Afghan army in its fight against militants.
There are about 8,400 US troops in Afghanistan — a majority of them are involved in training and advising Afghan troops. About 2,000 US service members participate in a counter-terrorism mission that targets terror groups such as al-Qaeda and IS.

US troops have been in Afghanistan for nearly 16 years, where the government and coalition allies are battling several terror groups, including the Taliban and IS.

She fled Afghanistan with her law degree sewn into her dress. Many of her colleagues were left behind

Who is the Saudi who blew himself up during his arrest and the case in which he is accused?