BEIRUT, Jan 12 (Reuters) – Lebanon’s prime minister said on Wednesday the government had not interfered with the judiciary’s work, after reports that he had put pressure on a judge who is seeking data from banks in an investigation into the conduct of the central bank governor.

Prime Minister Najib Mikati said last month that veteran Governor Riad Salameh, who is at the center of domestic and international probes over allegations ranging from fraud to embezzlement, should stay in his job to avoid adding to problems in Lebanon as it navigates a deep financial crisis. read more

“It is also necessary to clarify what came out yesterday (Tuesday) about matters related to the judiciary. In this context, I say it is not true that we interfered in the work of the judiciary or in any decision taken by the judiciary,” Mikati told a news conference.

The Tannous probe is investigating allegations of embezzlement and other misconduct at the central bank involving about $300 million in gains made by a company owned by Salameh’s brother, Raja.

Oueidat did not respond to a request for comment. Reuters has been unable to reach Raja Salameh and the central bank said it did not have his contact details.

Riad Salameh, who has run the bank for almost three decades, has repeatedly denied the accusations of wrongdoing being investigated by Tannous or by other Lebanese and international probes.

Two sources told Reuters that members of Lebanon’s state security had visited at least two commercial banks on Tuesday as part of the Tannous investigation, seeking information on the governor’s brother.

One of the sources with knowledge of one visit said the security officials initially pressed bank officials hard for data but then suddenly changed tack, softening their demands.

“The security forces got friendlier and started asking general questions rather than specifics… and that’s it, and they left,” the source said, asking not to be named because of the sensitivity of the issue.

As well as probes inside Lebanon, Riad Salameh is being investigated by authorities in at least four European countries, including Switzerland where an inquiry has also been examining gains made by the governor’s brother.

Judge Ghada Aoun, who is leading another Lebanese probe into the governor over allegations ranging from fraud to misuse of public funds, said on Tuesday she had imposed a travel ban on Salameh and the next stage would be to seek to question him. read more

Salameh said on Tuesday he had no knowledge of Aoun’s travel ban order and dismissed allegations in that probe, saying they were “part of the campaign to fool public opinion”.

Mikati told Wednesday’s news conference the aim of any government action was “not defending individuals but preserving of institutions” and the rights of depositors, who have been locked out of their accounts during Lebanon’s financial meltdown.

The governor, who has the backing of several top politicians, has stayed in his post even as Lebanon’s economy has been crushed by a mountain of debt, the currency has collapsed and swathes of the population driven into poverty. 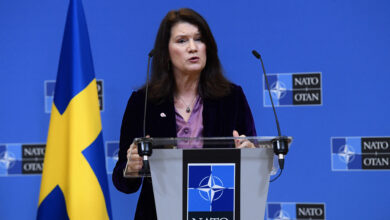