Transfermarkt, which regularly provides information about the global football scene, published a list of right-wingers with the highest market value in the world today.

Salah, who has scored 70 goals in the league since joining Liverpool in 2017, outperformed Barcelona legend Lionel Messi and other European and international football stars in the latest ranking from Transfermarkt. 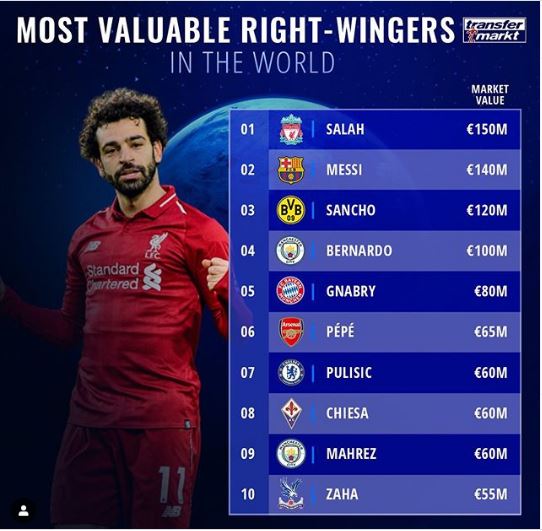 Mohamed Salah has racked up a number of awards since joining the Premier League. He won the League’s Golden Boot Award for 2017-2018 with 32 goals — a new record for a 38-game campaign — and won the award again the following season alongside teammate Sadio Mane and Arsenal’s Pierre-Emerick Aubameyang, making him the sixth player in history to win the award in back-to-back seasons.

Already an icon in Egypt, Mo Salah has also become an international star. Last year, Salah was listed among the highest-paid athletes of 2019 by the American magazine Forbes, with the player’s earnings valued at US$25.1 million.

Also in 2019, Time Magazine listed Salah as one of the “100 Most Influential People in the World.”