Turkey told the Netherlands on Sunday that it would retaliate in the "harshest ways" after Turkish ministers were barred from speaking in Rotterdam in a row over Ankara's political campaigning among Turkish emigres.

President Tayyip Erdogan had branded its fellow NATO member a "Nazi remnant" and the dispute escalated into a diplomatic incident on Saturday evening, when Turkey's family minister was prevented by police from entering the Turkish consulate in Rotterdam.

Hundreds of protesters waving Turkish flags gathered outside, demanding to see the minister. 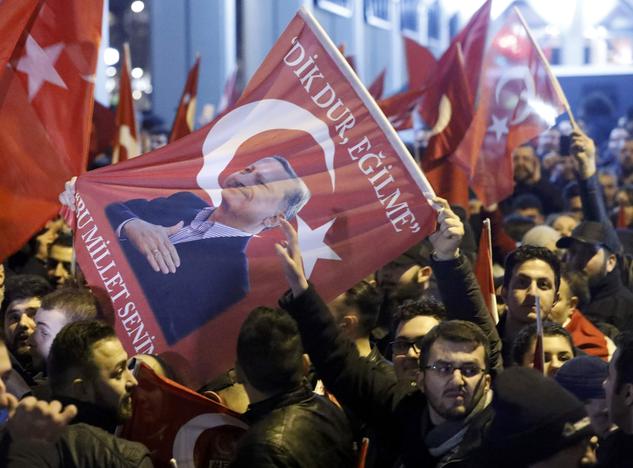 Dutch police used dogs and water cannon early on Sunday to disperse the crowd, which threw bottles and stones. Several demonstrators were beaten by police with batons, a Reuters witness said. They carried out charges on horseback, while officers advanced on foot with shields and armored vans.

Less than a day after Dutch authorities prevented Foreign Minister Mevlut Cavusoglu from flying to Rotterdam, Turkey's family minister, Fatma Betul Sayan Kaya, said on Twitter she was being escorted back to Germany.

"The world must take a stance in the name of democracy against this fascist act! This behavior against a female minister can never be accepted," she said. The Rotterdam mayor confirmed she was being escorted by police to the German border.

Kaya later boarded a private plane from the German town of Cologne to return to Istanbul, mass-circulating newspaper Hurriyet said on Sunday.

The Dutch government, which stands to lose heavily to the anti-Islam party of Geert Wilders in elections next week, said it considered the visits undesirable and "the Netherlands could not cooperate in the public political campaigning of Turkish ministers in the Netherlands."

The government said it saw the potential to import divisions into its own Turkish minority, which has both pro- and anti-Erdogan camps. Dutch politicians across the spectrum said they supported Prime Minister Mark Rutte's decision to ban the visits.

In a statement issued early on Sunday, Prime Minister Binali Yildirim said Turkey had told Dutch authorities it would retaliate in the "harshest ways" and "respond in kind to this unacceptable behavior".

Turkey's foreign ministry said it did not want the Dutch ambassador to Ankara to return from leave "for some time". Turkish authorities sealed off the Dutch embassy in Ankara and consulate in Istanbul in apparent retaliation and hundreds gathered there for protests at the Dutch action.

Erdogan is looking to the large number of emigre Turks living in Europe, especially in Germany and the Netherlands, to help clinch victory next month in a referendum that would give the presidency sweeping new powers. 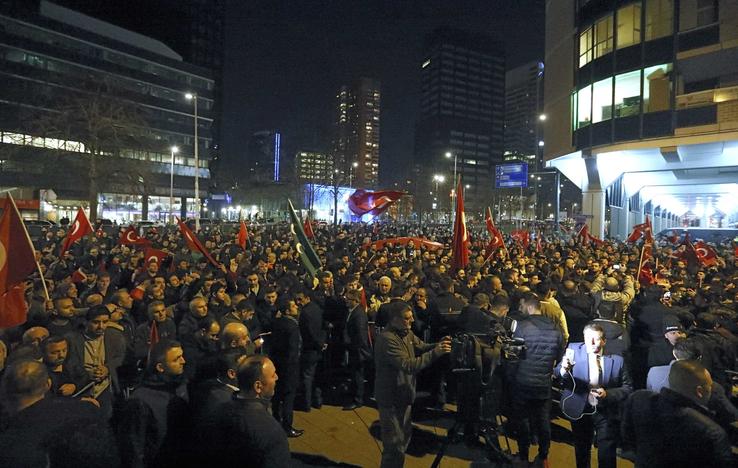 German Chancellor Angela Merkel has said she will do everything possible to prevent Turkish political tensions spilling onto German soil. Four rallies in Austria and one in Switzerland have been canceled due to the growing dispute.

Erdogan has cited domestic threats from Kurdish and Islamist militants and a July coup bid as cause to vote "yes" to his new powers. But he has also drawn on the emotionally charged row with Europe to portray Turkey as betrayed by allies while facing wars on its southern borders.

The Dutch government had banned Turkish Foreign Minister Mevlut Cavusoglu from attending a rally on Saturday in Rotterdam but he said he would fly there anyway, saying Europe must be rid of its "boss-like attitude".

Cavusoglu, who was barred from a similar meeting in Hamburg last week but spoke instead from the Turkish consulate, accused the Dutch of treating the many Turkish citizens in the country like hostages, cutting them off from Ankara.

"If my going will increase tensions, let it be … I am a foreign minister and I can go wherever I want," he added hours before his planned flight to Rotterdam was banned. 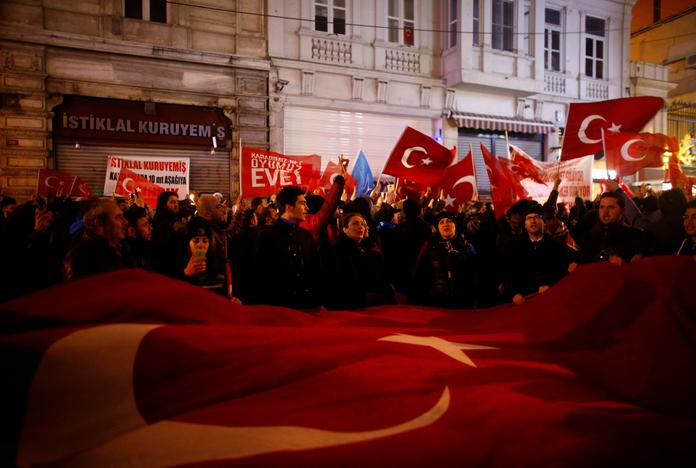 People wave Turkish flags during a protest in front of the Dutch Consulate in Istanbul, Turkey, early on March 12, 2017. REUTERS/Osman Orsal

Cavusoglu threatened harsh economic and political sanctions if the Dutch refused him entry, and those threats proved decisive for the Netherlands government.

It cited public order and security concerns in withdrawing landing rights for Cavusoglu's flight and said the threat of sanctions made the search for a reasonable solution impossible.

"This decision is a scandal and unacceptable in every way. It does not abide by diplomatic practices," Cavusoglu told reporters in Istanbul on Saturday evening.

Dutch anti-Muslim politician Wilders, polling second ahead of Wednesday's elections, said in a tweet on Saturday: "To all Turks in the Netherlands who agree with Erdogan: Go to Turkey and NEVER come back!!"

Rutte, the Dutch prime minister, said: "This morning on TV [the Turkish minister] made clear he was threatening the Netherlands with sanctions and we can never negotiate with the Turks under such threats. So we decided … in a conference call it was better for him not to come."

Addressing a rally of supporters, Erdogan retaliated against the decision to prevent the Turkish foreign minister from visiting Rotterdam.

"Listen Netherlands, you'll jump once, you'll jump twice, but my people will thwart your game," he said. "You can cancel our foreign minister's flight as much as you want, but let's see how your flights will come to Turkey now."

"They don't know diplomacy or politics. They are Nazi remnants. They are fascists," he said.

Rutte called Erdogan's reference to Nazis and Fascists "a crazy remark". He added: "I understand they're angry but this is of course way out of line".

Erdogan chafes at Western criticism of his mass arrests and dismissals of people authorities believe were linked to a failed July attempt by the military to topple him.

He maintains it is clear the West begrudges him new powers and seeks to engineer a "no" vote in the referendum.

Barred from the Netherlands, Cavusoglu arrived in France on Saturday ahead of a planned speech to Turkish emigres in the northeastern city of Metz on Sunday, a Reuters witness said. Earlier, an official at the Moselle regional prefecture told Reuters there were currently no plans to prevent the meeting from going ahead.

A member of the Union of European Turkish Democrats also said on Saturday via a Facebook post that the Turkish foreign minister would no longer come to Switzerland for a planned event on Sunday after failing to find a suitable venue.

Zurich's security department, which had unsuccessfully lobbied the federal government in Bern to ban Cavusoglu's appearance, said in a statement on Saturday evening it was relieved the event had been canceled.

(Reporting by Tuvan Gumrukcu in Ankara and Thomas Escritt in Rotterdam; Additional reporting by Anthony Deutsch and Toby Sterling in Amsterdam; Writing by Ralph Boulton and Daren Butler; Editing by David Clarke and Simon Cameron-Moore)

China’s lockdown protests: What you need to know

Process of rebuilding relations with Egypt starts with a ministerial meeting: Turkey’s President