Ayman Nour has been always a controversial figure in Egyptian politics. Although he is almost unknown to the majority of Egyptians, Nour managed to come in second in the first multicandidate presidential elections which was held in September 2005, though he still lost by a wide margin. When Nour’s Ghad Party was officially recognized in October 2004, the move was perceived by many as a cosmetic concession by the regime to display a democratic façade. Al-Masry Al-Youm English Edition met Nour to discuss his future plans and his analysis of Egypt’s current situation.

Al-Masry Al-Youm English Edition: The launch of the Egyptian Campaign Against Presidential Succession last month was welcomed by many as a step to overcome the dilemmas of a highly fragmented opposition that lacks a unified strategy. But only one month later, members of the Kefaya movement announced their withdrawal from the newly-established platform on the grounds that you have accepted an invitation to lecture at a Washington-based NGO. How do you explain that?

Ayman Nour: Let me first clarify certain things. A tiny minority within Kefaya, especially those who are close to its current general coordinator, Abdel Halim Qandil, have stepped out of the Campaign. The majority, however, reassured their commitment to its structures and objectives. Initially, Qandil aspired for a bigger role inside the Campaign. He wanted to be its spokesperson, but we decided to select political science professor Hassan Nafea who is a non-partisan figure around whom we can all build a consensus.

Al-Masry: Aside from what you see as personal motives, what was Qandil’s justification?

Nour: I don’t know. I did not quite understand his position. I made it clear from the very beginning that I am equal to everybody inside the campaign so as to avoid any accusations of looking for a personal glory.

Al-Masry: Qandil said that his decision was based on the fact you have accepted an invitation to participate in a symposium organized by the National Endowment for Democracy, which is funded by the US congress.

Nour: This whole fuss about my trip to the US is meaningless after the prosecutor general’s decision to ban me from traveling. Moreover, I cannot see what’s the problem with attending a seminar at an NGO that receives grants from the [US] congress. I might have problems with dealing with some US administrations’ officials, but I don’t have any problems dealing with representatives of the American people.

Al-Masry: But you agreed on the founding manifesto of the Campaign, which says that parties involved are not even to deal with Egyptians living abroad?

Nour: I didn’t attend that particular meeting where all groups drafted the manifesto, but if I did I would have bluntly expressed my view that this is a wrong position. Egyptian expatriates are as patriotic as Egyptians living inside the country. Both have the right to participate. I knew this particular item was intended to dismiss Professor Saad Eddin Ibrahim, whom I greatly admire. I think he is a good-hearted and patriotic person. Excluding Ibrahim, however, should not indicate that we could not benefit from the more than 7.5 million Egyptians living abroad.

Al-Masry: What about the Egyptian opposition’s rejection of establishing any links with the US government?

Nour: This is the crisis of the opposition. Personally, I present myself as an alternative to the regime and I don’t enjoy opposing for the sake of opposition per se. This is exactly what poses a real threat to the regime, which has long presented itself to the Americans and the West as the only alternative to terrorism, extremism and chaos. The regime’s survival equation is destabilized when a more liberal, younger, more civil and democratic alternative is offered. This regime wasn’t disturbed by the votes I received [in the presidential elections], rather by the fact that I have been an acceptable alternative both inside and outside Egypt. If I was an extremist, the regime would have tolerated my presence knowing that I could never appeal to the outside world.

Al-Masry: In this context, do you agree that President Barack Obama’s administration has returned to old-fashioned diplomacy that favors stability over political reform in Egypt and the Middle East?

Nour: I am skeptical about Obama’s willingness to combine both principles and interests. People in the region saw Obama’s victory as an embodiment of the ideas of respecting the “other” and including minorities in the power sharing mechanism. However, Obama’s insistence on distancing himself from whatever his predecessor, George Bush, had been advocating and pushing for, including human rights and democracy promotion, is mistaken. Whether you approve or disapprove of Bush’s legacy, the former administration actually pressured the tyrannical regimes of the Middle East, including Egypt, to open up. When Obama came he alleviated the pressure on these regimes. I consider it a betrayal of whatever ideals he stood for. Unfortunately, the policy of adhering to some sort of imagined stability will be the mine that will implode the entire region. After 60 years of supporting dictatorships, the United States should have better understood the lessons of 9/11. It was political despotism which blew up the towers of the World Trade Center, not the suicide bombers who drove the planes. Extremism has been manufactured in the context of tyranny and political oppression. If the Americans don’t understand this now, then they will never get anything in the future.

Al-Masry: Do you think there is American approval of a possible transfer of power from President Hosni Mubarak to his son Gamal?

Nour: I can’t say for sure. But what I am aware of is that Washington faces a certain dilemma assessing the post-Mubarak era. Mubarak has fulfilled US interests in the region for the past 30 years and the Americans are searching for someone who can perform the same duties. What they are missing is the fact that Egypt has played a rather vague role in the peace process. It has always pushed for never-ending peace negotiations. I believe that military regimes, including the Egyptian one, could never be keen on reaching a final and just peace settlement because they know very well that their raison d’être will be over. These regimes, by definition, are only kept intact by producing and reproducing instability and tension. We are not calling for the Americans to assume our responsibilities. Instead, we ask them to stop supporting despotism or presidential inheritance.

Al-Masry: Aside from speaking in very general terms, the anti-Gamal campaign lacks a plan of actions or even a unified diagnosis of Egypt’s predicaments. Don’t you think this reflects deeper divisions beyond the question of political succession?

Nour: I agree, but you have to take into consideration that we are only a month old and that we all agreed on the premise that the problem of succession should not be personified by Gamal only. We are against any kind of inheritance from within the ruling establishment, be it the party or the military.

Al-Masry: Even when it comes to preventing what you call the scenario of presidential inheritance, the opposition is divided over the best practical counterattack strategies. Veteran journalist Mohammed Hassanein Heikal proposed establishing a "council of experts," which includes both civilian and military figures under the guidance of Mubarak to supervise a transitional period where a democratic constitution can be drafted.

Nour: Back in 2005, I proposed a transitional period of two years to prepare the country for truly free and fair elections in which democratic structures and constitutions could be constructed. The problem with Heikal’s suggestion is that he wants Mubarak himself to lead such a transitional period and I can’t really see how Mubarak could be trusted to govern the country’s board of directors. How could one ever imagine that Mubarak, who has been in office for 28 years, would relinquish any of his power to anybody?

Al-Masry: Some experts, however, think that Heikal’s proposal constitutes a safe and realistic exit strategy for the regime. Opposition forces are weak, with virtually no grass-roots bases. Therefore, he is betting on certain forces within the ruling elite, particularly the military, to prevent any father-to-son transfer of power. This is why he suggested that Defense Minister Mohamed Tantawy and head of intelligence Omar Suleiman to be part of this proposed provisional council.

Nour: According to my own understanding of Heikal’s history and political convictions, it’s very likely that he would think along these lines. However, we are not prepared under any circumstances to offer a carte blanche to anybody, even if he is an army officer, unless he unequivocally pledges to our demands to form a general assembly [of leading public figures with integrity] to draft a democratic constitution and institutionalize a liberal political structure on a clear timetable.

Al-Masry: So you are not an advocate of the idea that Egypt would be in a better position if ruled by a military general?

Nour: No. Although I respect the armed forces and consider it an efficient and patriotic institution, it must not be involved in the political sphere. Any person, civilian or not, would not be welcomed unless he is fully committed to a democratic process where the people’s will is not subject to forgery. Otherwise, accepting a military officer unconditionally, without obtaining straightforward democratic guarantees, would entail a more serious challenge than the current status quo. It will simply curb the potential for a democratic change.

Al-Masry: Do you think the military will have a say in determining the next president?

Nour: The army will remain a constant in the equation. However, I must add that President Mubarak has successfully managed to reduce every branch of the state–be it the judiciary, the parliament, or the government–into his own persona.

Al-Masry: What do you think of the idea that independent public figures such as Mohamed ElBaradei, the outgoing director of the International Atomic Energy Agency and the secretary general of the Arab League Amr Moussa, might run for presidency?

Nour: I would never support Moussa because he has always been part and parcel of the regime. As for ElBaradei, I am currently considering asking the Ghad Party to accept him to the party’s high ranking position so as to make him eligible for a presidential candidacy.

Al-Masry: Last week, you suggested a presidential ticket that included a vice president. Would you consider ElBaradei as a potential nominee?

Al-Masry: Have you contacted ElBaradei?

Al-Masry: Will you run for presidency?

Al-Masry: But  some pending legal difficulties remain regarding the fact that you were convicted of a crime involving moral turpitude, which disqualifies you from running to presidency.

Nour: I have a legal way out which I will reveal in the future.

Al-Masry: Political adviser to the Muslim Brotherhood Abdel Halim el-Ghazali said recently that the regime would prevent the group from winning any seats in the 2010 parliamentary elections. Do you think the government will pursue a similar strategy with your party? 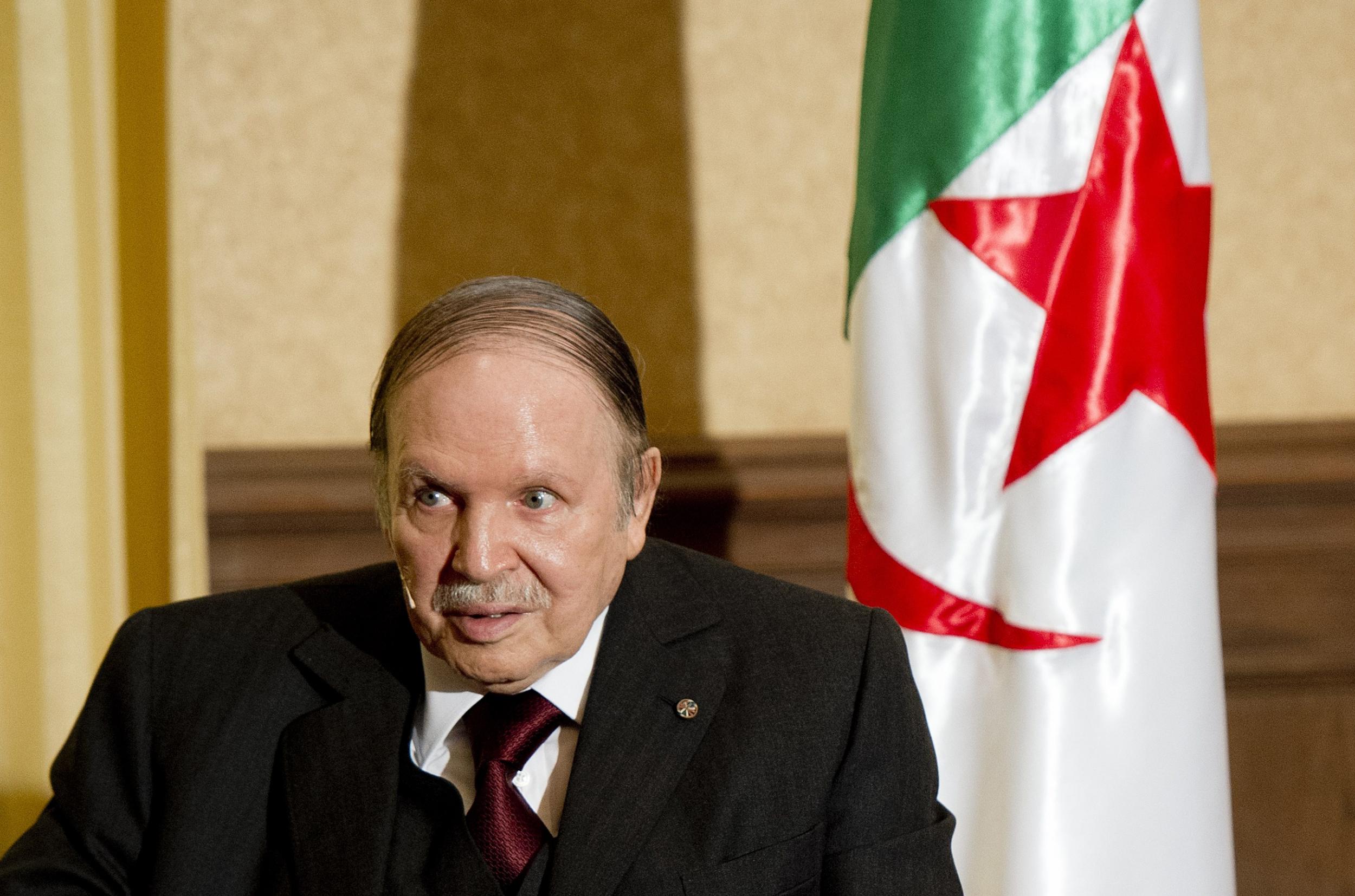