The Egyptian-Dominican mission of the University of Santo Domingo working at the Taposiris Magna Temple in western Alexandria have uncovered 16 burial chambers in rock-cut tombs (burial shafts), a style popular in the Greek and Roman eras. 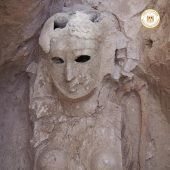 Within these shafts were mummies in poor condition, highlighting the difference between Greek/Roman era mummification and older Egyptian mummies.

Those mummies were dressed in remnants of gilded cartonnage, and gold foil amulets shaped like a tongue were placed in their mouths as part of a special ritual to ensure their ability to speak in the afterlife before the Osirian court. 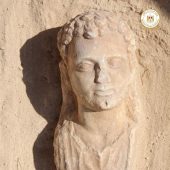 The head of the mission, Kathleen Martinez explained that among the most important findings were two mummies with preserved scrolls and other artifacts on them.

The first bore gilded decorations showing the god Osiris, while the other mummy was decorated with horns and a cobra snake at the forehead. A gilded necklace on one of their chest showed the head of a falcon, the symbol of the god Horus. 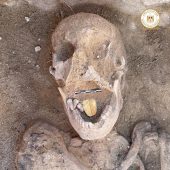 The Director General of Alexandria Antiquities Khaled Abul Hamd listed several discoveries made by the mission this season, the most major of which was a woman’s funeral mask, eight golden flakes representing the leaves of a golden wreath and eight highly detailed marble masks dating to the Greek/Roman eras. 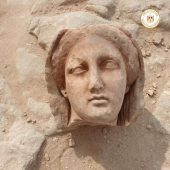 During the last ten years the mission found an important group of archaeological discoveries that changed perception of the Temple of Taposiris Magna.

A number of coins bearing the name and image of Queen Cleopatra VII were found inside the temple walls, in addition to many parts of statues and temple grounds which were adorned in the past to reveal the temple foundation panels, proving that it was built by King Ptolemy IV.