President of the Palestinian Authority (PA) Mahmoud Abbas this week called the decision by US President Donald Trump to recognize Jerusalem as Israel’s capital the “slap of the century.” His remarks came at the beginning of a two-day conference in the Palestinian city of Ramallah.

The Palestinian Central Council, the second-highest decision making body of the Palestinian Liberation Organization (PLO), backed a draft measure during the conference to revoke its recognition of Israel if Israel doesn’t recognize a Palestinian state. The PLO is the representative of the Palestinian people as designated by the United Nations.

“Yekhreb beitak!” Abbas cursed Trump in his speech. The phrase means literally in Palestinian Arabic, “May your house be demolished.” He also chastised other Trump administration officials, including UN Ambassador Nikki Haley and US Ambassador to Israel David Friedman, and declared, “We will not accept a deal America dictates.”

“The decisions by Abbas or at least his declarations have come from a place of genuine despair,” Yossi Mekelberg, a professor at of international relations at Regent’s University London and an associate fellow at the UK think tank Chatham House, told DW. “There is no peace process, the occupation continues, the settlements expand.”

Abbas, in Mekelberg’s view, is an “experienced” leader who wants to break the stalemate between the Israelis and Palestinians.

“The question is how far is he willing to go?” Mekelberg asked. “Will he bring it to the ultimate conclusion if there is no political movement, if there is a collapse of the PA, and step down because it doesn’t function and doesn’t achieve what Palestinians like to achieve, which is self-determination? Or he practices brinkmanship and withdraws from the brink just before the collapse.”

A possible withdrawal by Palestinian leaders from the US-brokered Oslo Accords, which were established in the 1990s and led to the creation of the PA, could mean the collapse of the PA and the end of Abbas’ career.

The situation became even more dire on Tuesday, when the Trump administration made due on a promise to withhold funding from the United Nations Relief and Works Agency for Palestine Refugees in the Near East (UNRWA). A US official told Reuters news agency that the administration will give $60 million (€49 million) in aid for Palestinians but hold back $65 million. The agency is responsible for shelter, food and other basic living needs for 5 million Palestinian refugees between Lebanon, Syria, Jordan, Gaza and the West Bank.

Amos Gilead, a retired general and formerly the director of policy and political-military affairs at the Israeli Ministry of Defense told the Jerusalem Post that due to Abbas’ decision, “Israel should reconsider its positions and try to find way to forge a peace agreement with him.” Otherwise, he went on, “it may need to abandon the process entirely” and “it is bad news that it appears as though he will be leaving no options for peace.” Israeli Defense Minister Avigdor Lieberman was quoted as saying the decision was “childish.”

Palestinian politician Moustapha al-Barghouti told DW he supported the move. “The two-state solution must be imposed on Israel and Israel should be pressured to stop settlement expansion, recognize the independent state of Palestine and show readiness to end the occupation,” he said. “The Palestinians on the street are in favor of the decisions taken by the Palestinian leadership, but want them to be firmer and clearer. They must have effective and concrete implementation mechanisms.”

No end in sight?

Trump’s latest actions, which emboldened Israeli hardliners and the PLO’s response in regard to the issue, mean both sides are more polarized than ever. “There is no peace process on the horizon and something has to happen, whether it be regarding the blockade of Gaza, the settlements in the West Bank, as well as the Palestinian millions of refugees in other parts of the Middle East,” Mekelberg said. 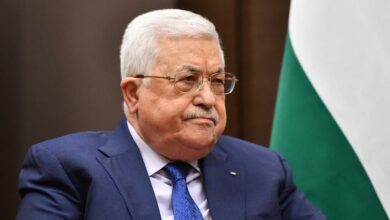