Russian President Vladimir Putin has dispatched one of his country’s most modern warships armed with advanced hypersonic missiles on a long voyage through the Atlantic Ocean to the Mediterranean Sea and into the Indian Ocean, Russian state media reported Wednesday.

The frigate Admiral Gorshkov set off from an unnamed northern Russian port on Wednesday after Putin spoke with the ship’s commander and Defense Minister Sergei Shoigu via video link, according to a report from the TASS news agency.

Putin boasted that the ship was carrying Zircon hypersonic missiles, long-range weapons that travel more than five times the speed of sound and are harder to detect and intercept.

“It has no analogues in any country in the world,” Putin said, according to TASS. “I am sure that such powerful weapons will reliably protect Russia from potential external threats and will help ensure the national interests of our country,” he added.

Russia tested the Zircon system in late 2021, firing from the Admiral Gorshkov in the White Sea and hitting a naval target more than 400 kilometers (250 miles) away, according to reports at the time.

The current mission would be its first deployment in a potential combat situation.

“The main efforts during the campaign will be focused on countering Russia’s threats, maintaining regional peace, and stability together with friendly countries,” Shoigu said in the TASS report.

Would it be used in Russia’s war in Ukraine? Russia’s war against neighboring Ukraine is now in its 10th month, but that conflict was not mentioned specifically in the TASS report.

And whether the Zircon missile could be brought to bear in that war is uncertain.

Boris Johnson says Putin “threatened” him with a missile strike 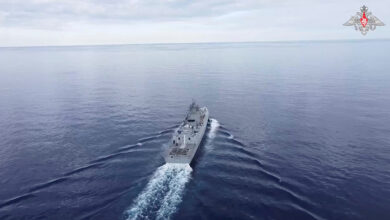