Almost a year after it was set ablaze during clashes nearby, the Institut d’Egypte has reopened its doors boasting the fast restoration of both its collection and building. Egypt Independent paid the institute a visit to see how things were on the ground.

In the first part of our review of the restoration process, we focus on the developments within its massive collection that many hope will be known and accessible to a wider public.

Upon entering the institute, visitors are led to the reading room (the only one currently open to the public). Books line the four walls, while some of the rare burnt manuscripts and books are displayed in glass vitrines. The books consist both of new donations and older ones that escaped damage after the fire.

The inclusion of burnt books and manuscripts that cannot be restored is to “remind people of the tragic disaster,” says Soheir Yassin, chairperson of the restoration center at the Egyptian National Archives.

In 2011, the Institut d’Egypte was home to more than 190,000 titles, including original maps, documents, books, articles, newspapers, magazines and reports, according to Mohamed Abdel Rahman al-Sharnoby, the institute’s secretary general. Most of them were written in French as they date back to the French expedition to Egypt. But, visitors could also find titles in Italian, Spanish, Turkish, German, English, as well as some rare Arabic publications.

Currently, the institute only has about 25,000 books that include those rescued from the fire and returned by the National Archives, as well as newly donated publications and manuscripts. The French Institute of Archaeology, Geological Survey Institute, the Remote Sensing Authority and the World Health Organization are among the donors.

Sheikh Sultan al-Qasimi also donated a copy of the famous “Description de l'Égypte” (Description of Egypt), and Haitham Khayet, a member of the Arabic Language Academy in Cairo and Damascus, has donated his personal library of more than 5,000 books. The family of the late Mahmoud Hafez, former head of the Arabic Language Academy, has also donated his collection.

Sharnouby is confident that the new assets will exceed the original collection in number. But, for him, the main loss is the great cultural and scientific value of some books and newspapers published by scientific associations in Egypt that operated for a short period at the beginning of the 19th century. Some English and French magazines and newspapers, chronicling in detail Egyptian news during the occupation periods from the time, were also lost.

“We have asked some international newspapers and magazines to send us old copies,” says Sharnoby. “But, some refused and the others ignored our request.”

According to the most recent report issued by the Egyptian National Archives three months ago, the Archives have received only 54,000 publications from the Institut d’Egypte. About 21,000 books were in good condition; 10,000 were damaged by the water used to extinguish the fire, while about 3000 publications were completely burnt.

“Some books [from the original collection] weren’t found such as a rare atlas of Egypt and Ethiopia. We sent formal bulletins to the Interpol and national libraries all over the world to prevent their buying and selling and have managed to retrieve some,” says Abdel Nasser Hassan, the chairman of the Egyptian National Library and Archives.

But, even for books that have made it to the National Archives, challenges for restoration remain. Chairperson of the restoration center Yassin explains that the random process of extinguishing the fire and transferring the books caused many problems.

“People were handling books with their bare hands, putting them in trucks without wrapping them to separate the burnt books from the undamaged ones.” She adds that using water to extinguish the fire was a fatal mistake. “In all libraries around the world, people use special gases and chemicals that put down the flames without harming the books.”

However, she argues that the blame should not be placed on these people. Rather, it was the government’s responsibility to send restoration experts to supervise the process.

Yassin explains that the center’s workers have spent the past two months drying books to protect them from decay. She admits that they have followed some unscientific methods for drying the books like spreading books on the floor and putting them on the building's surface in order to dry them because they did not have enough space for storing the books or enough machines to dry them.

“We know this was wrong but we didn’t have other options and wanted to save as many books as possible,” she explains justifying the “non-scientific” method. The books were not classified before restoration, which would avoid wasting money or materials on low value books that the institute can easily replace. Going forward, they will classify the books before completing the restoration, she says.

“We can’t depend only on the governmental budget as there are ten other restoration projects that we are working on,” says Hassan. The National Archives is currently negotiating with the International Cooperation Ministry to assist with funding. “We are asking all private and public institutions that care about Egypt’s scientific and cultural heritage to help us with the required raw materials and machines to continue what we started.”

Yassin asserts that there is not a set schedule for the restoration of the books at this point due to limited resources. And whereas they hope to ultimately digitize the collection so that people can easily access soft copies of the publications at the institute, no definite dates have been set.

Apart from the books on display in the reading room — they are not yet catalogued — the rest of the collection that was saved from the fire lies in boxes in the side rooms at the institute.

Experts from the Bibliotheca Alexandrina are expected to arrive soon and start cataloguing the institute’s collection. But the much needed digitization process awaits the availability of funding to complete the restoration of the institute’s massive collection which for now remains at the Egyptian National Archives. 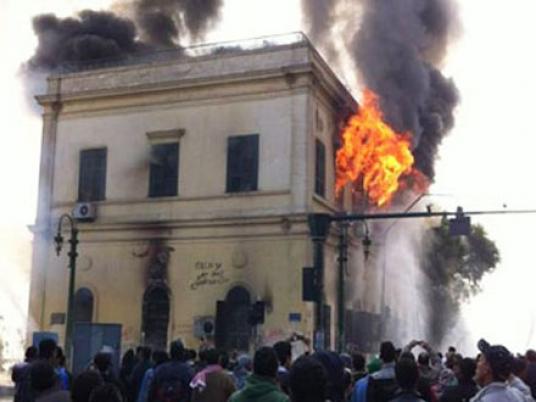