At the conference–entitled "The Presidential Elections: Challenges and Opportunities"–Ibrahim went on to say that presidential scion Gamal Mubarak was "not on my list of preferences, although I support his right to nominate himself since I believe in multiplicity.”

Ibrahim was roundly criticized late last month after he signed a petition in support of a presidential bid by Gamal Mubarak, the 47-year-old son of President Hosni Mubarak, in elections scheduled for next year.

Ibrahim went on to describe ElBaradei’s speech at the conference, which was organized by the US-based Alliance of Egyptian Americans, as "direct and simple." Ibrahim praised the former UN nuclear watchdog chief for "avoiding the confusion" associated with the current political situation.

In his speech, ElBaradei called on expatriate Egyptians to assume their rightful position “at the forefront of change."

“Where do you stand regarding the 'Together for Change' petition?” he asked members of the audience, in reference to his pro-reform signature drive. “There are between six million and seven million Egyptians living abroad, of whom I expected at least two or three million to sign.”

“I know some of you are reluctant due to your responsibilities in Cairo," ElBaradei added. "But our power is in our numbers, and each one of us must do his part." 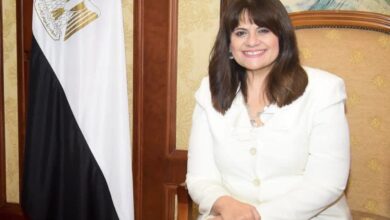 Egyptian expatriates around the world account to 12 million: Immigration Minister