For an artist as renowned for politically-charged works as Shepard Fairey, the conservative United Arab Emirates might seem like an unlikely place for a new gallery show.

And yet the country’s glitziest city, Dubai, is precisely where the US contemporary artist — best known for the iconic Obama “Hope” poster — is marking his first foray into the Middle East.

Fairey’s first show in the region, “Future Mosaic,” opens on March 15 at Dubai’s Opera Gallery, and features 150 works — both newer pieces as well as iconic images and motifs from the artist’s greater oeuvre.

To mark the occasion, the artist has also painted a mural in D3, Dubai’s design district.

The mural — which CNN was given an exclusive first look of — consists of two large walls facing each other. One side depicts camellia flowers and a dove, and on the opposite wall is an intricate motif of fingers gesturing a peace sign, and a fist holding a paintbrush with a flower growing out of it.

For someone who admits he has little knowledge about the city, or the region, Fairey jumped at the chance to visit Dubai.

“As soon as I heard that they had a gallery here, I said that’s where I want to do it. I’m not an authority on Arab culture or Islam, but I’m open-minded and I’m here to learn,” he said, in an interview at the gallery. 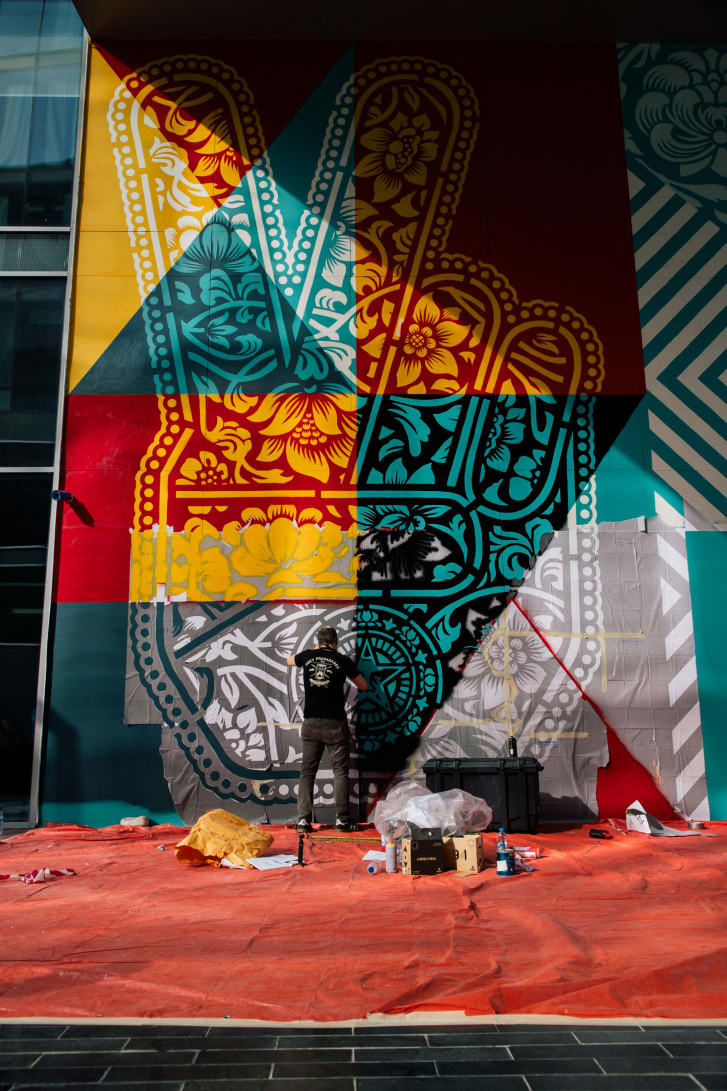 Wearing a face mask, he passes by visitors that are attending a preview of the exhibition, praising his work while unaware that the artist stands behind them.

“In the US, there’s so many misconceptions about the culture of the Middle East. And obviously it’s not monolithic — it’s much more Western here (in Dubai) than it might be in other places. But I always want to feel like I’m learning and growing and I’m commenting on things from a place of experience as much as possible.”

On first glance, the collaboration might seem unlikely. Fairey is a skater-turned-street artist, who took the subculture by storm with his “Andre the Giant Has a Posse” sticker campaign in 1989. In 2008, he catapulted to international fame when his “Hope” poster of then presidential candidate Barack Obama became the defining symbol of a deft election campaign. He’s an activist and a vocal critic of Donald Trump, and his murals and artworks aren’t known to shy away from comments on human rights abuses, climate change and female empowerment.

“I pretty much put everything in this show that I would put in any show,” he said, when asked if his works were censored for the exhibition. “I asked ‘what about my critiques of the oil industry?’ And they said well that’s not the main revenue driver for the UAE anyway. And I don’t do anything explicitly sexual.”

However, the first concept for a mural, to be located in another part of the city, was scrapped, as it was too difficult to get over the line. The piece, “Lotus Angel,” shows a woman holding a flower.

“It’s a female figure and that’s not easy to get approval for in a public space here,” he explained.

So a new site — the D3 district — and new design (seen above), was chosen. It sits alongside a host of popular restaurants and office spaces.

This idea of tolerance and cultural acceptance is important to Fairey.

“The fist is a symbol of strength and empowerment, the paintbrush is for art and the flower as something positive growing and blooming. It doesn’t matter if you speak English, Arabic, German, Chinese, you can understand that imagery,” he added.

“Peace and harmony … are easy for anyone to understand and it’s hard to find fault with those ideas. It doesn’t say anything about religion or gender or nationality so these are ideas I can take anywhere.”

Which is why, when his Dubai show was announced and he recalls being “attacked” on social media, he wasn’t swayed.

“The US is far from perfect when it comes to people’s rights. I’m not going to be cowed by hypocrisy. I am going to export my philosophy to wherever I go. This place isn’t going to mold me, I’m going to share my ideas and hope that they’re well received and if they’re not I’m still going to be me.”

Besides, Fairey admits self-censorship often comes into play when he’s considering the message he’s trying to send with any artwork.

“I’m trying to make sure I’m not accidentally pushing people away before they’ve even had a chance to consider what I’m saying with my work.”

In regards to US politics, he’s “more hopeful” for a functioning democracy under a new president at the helm, though cautions that there are lingering sentiments of the Trump administration that need to be addressed.

“The thing that really worries me right now is the way in which a lot of very immoral, manipulative people have decided that flat-out lies and disinformation are a tactic that will get them their way and not give them any political liability,” he said.

“There are pustules on the surface on the skin — Trump has been popped but the bacteria is still there.”

But Fairey adds that it’s been “so far, so good with Biden.”

“I’m pretty impressed with the way Biden is trying to go, but that doesn’t mean he’s going to achieve these things.”

The artist now considers himself a “world citizen” and an “artist of the people.” He’s keen to spend more time abroad, learning about other cultures and incorporating that into his work.

It seems fitting that a large piece depicting a woman in a hijab is positioned near the door of his exhibition. Otherwise, the rest of the art has “universal” themes — featuring pop culture figures and emblems of peace.

But this isn’t a tokenist piece to show he “gets’ Islam, he says, but rather an older piece that “makes sense” for his first show in the Middle East.

“In the US, there’s so much Islamophobia, so people freak out when you’re even trying to present a Muslim.

“The cultural preconceptions get in the way of seeing everyone with equal dignity. Wherever I can, I’m trying to erode barriers. It’s a handshake from afar. I’m open-minded, and I’m here to learn.”

Egypt participates in Arab Travel and Tourism Forum in Dubai