Scientists are still unable to identify with certainty the cause of the mass death of dozens of marine turtles last week in Lake Bardawil, an area on the Mediterranean coast in North Sinai Governorate.

The incident triggered official reactions, with Minister of State for Environmental Affairs Mostafa Hussein Kamel calling for the urgent formation of a committee to investigate the deaths of the turtles that latre washed up 60 km from the city of Arish.

The committee, which includes experts from the Egyptian Environmental Affairs Agency’s nature conservation sector as well as professors specializing in marine plants and veterinary science from Suez Canal University, took samples of blood and tissue from the turtles to determine the reason behind the deaths.

Noor Noor, Executive Coordinator at the NGO Nature Conservation Egypt, told Egypt Independent that initial findings pointed to poisoning and that the official number had risen from 70 to 84 dead sea turtles.

“The committee doesn’t want to rush to conclusions, as they are still working on more lab results,” Noor said. “This includes samples of dead turtles and one that is still alive although in critical condition. But some of the professors indicated that the mass deaths occurred as a result of poisoned fish that were consumed by the turtles, however this theory remains under inspection.”

Suez Canal University oceanography professor Magdy Elwani is convinced by this theory, saying it is not uncommon for fishermen to attempt to kill off the sea turtles by poisoning.

“As sea turtles in this region feed on small fish, the fishermen have resorted to [poisoning] them because they present a risk to their fish stock and their livelihoods, he explained. “It can take days or weeks for the turtle to perish after having absorbed the poison, and the two turtles that were still alive a few days ago but died yesterday are being examined by a team from the Suez Canal University to verify the poison theory,” he said.

Elwani added that such incidents cause a great deal of embarrassment for Egypt on an international level, as the sea turtles in the area are an endangered species that come to the coast here to nest.

Early findings showed that some of the turtles had been dead and decaying for over two months, which sparked Elwani to decry what he said was the government’s slow and indifferent reaction.

“Many international NGOs and official governments were very keen on contacting us to pinpoint the cause of mass deaths, as the matter [is] of high concern to them, while official Egyptian bodies such as the Ministry of Environment, Sinai Governorate and the Egyptian Authority of Fish Resources preferred turning a blind eye to the catastrophe,” Elwani said.

“The number of deaths is really huge, one of the biggest recorded in Egypt, and the thing that’s concerning us the most is that the early tests haven’t shown any obvious answers whether the deaths are caused by water intoxication, increased salinity or another reason,” Ali said.

The committee’s initial external inspection highlighted signs of erosion of the turtles’ carapace with no traces of oil spots detected on the body; however, follow-up tests are underway.

Ali suspects that some kind of pollution may have caused the deaths, as sea turtles are vulnerable to pollution at all life cycles, from eggs to hatchlings to adults. Pollutants including toxic metals, petroleum products and agricultural and industrial runoff of contaminants such as fertilizers may cause immediate harm to sea turtles through direct contact or can build up in tissues over time, resulting in disease and death.

Mohamed Salem, the former director of the ministry’s Sinai protectorates sector, was quoted in the state-run dailies Youm7 and Al-Ahram lamenting the inefficiency of the investigation committee and criticizing the Ministry of State for Environmental Affairs. He complained about the absence of a reliable database of Egypt’s marine animals and a map of diseases afflicting them, saying that “forming committees is not the end of the road, but just a beginning of a long process that must provide scientific, long-term solutions to avoid such incidents or national measures to address the real causes.”

Sea turtles are one of the Earth’s most ancient creatures.

Of the seven species that can be found today worldwide, five are found in Egypt’s waters in the Mediterranean and the Red Sea. They have been around for 110 million years, since the time of the dinosaurs. The species found here are all listed on the International Union for Conservation of Nature Red List of Threatened Species. They are flagged as “endangered” with the continuous drop-off in their numbers.

Poisoning, pollution and habitat destruction are among the main causes behind the decline in Egypt’s sea turtles, with net fishing being another serious threat. 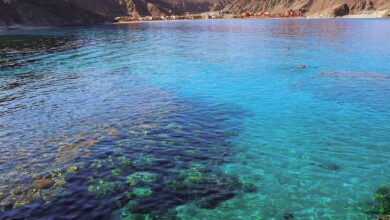