Kennedy Space Center, Florida (CNN) – The launch of NASA’s historic Artemis I moon mission has been postponed after the team was unable to work through an issue with one of the rocket’s four engines.

“It’s too early to say what the options are,” said Mike Sarafin, Artemis mission manager at a NASA press conference. “We really need time to look at all the information, all the data. We’re going to play all nine innings here. We’re not ready to give up yet.”

The next opportunity to send the Space Launch System rocket and Orion spacecraft on their journey is September 2, but whether or not another attempt is made that day depends on how testing goes.

Sarafin confirmed that “Friday is definitely in play” if the team can resolve the issue while the rocket sits on the pad within the next 48 to 72 hours.

“Launch controllers were continuing to evaluate why a bleed test to get the RS-25 engines on the bottom of the core stage to the proper temperature range for liftoff was not successful, and ran out of time in the two-hour launch window,” according to an update from NASA. “Engineers are continuing to gather additional data.”

The launch team knew that the bleed test was a risk because they weren’t able to include it in previous wet dress rehearsal tests simulating the launch, and Monday was the first time demonstrating that, Sarafin said.

Currently, the issue doesn’t suggest an engine problem, but rather an issue within the bleed system that is used to cool the engine, he said.

“We need the engine to be at the cryogenically cool temperature such that when it starts, it’s not shocked with all the cold fuel that flows through it. So we needed a little extra time to assess that,” Sarafin said.

The team also saw an issue with the vent valve at the inner tank and the combination of issues convinced the team they needed more time, Sarafin said.

If a substantial fix is needed the team may require more time to address it and roll the rocket stack back into the Kennedy Space Center’s Vehicle Assembly Building, a process that takes 3 1/2 days.

The launch team still needs to troubleshoot the engine issue and will keep the rocket in its current configuration to gather data and assess what needs to be done. Both the Space Launch System rocket and Orion spacecraft remain stable, according to NASA officials.

Prior to the scrub, the countdown was extended into an unplanned hold as the launch team worked on a troubleshooting plan for one of the rocket’s four engines.

That’s because the launch team discovered an issue with an engine bleed in engine #3. Attempts to reconfigure it were unsuccessful.

During engine bleeds, hydrogen is cycled through the engine to condition it for launch. Three of the four engines are performing as expected, but engine #3 experienced an issue.

Previously, 80% favorable weather conditions had been forecast for the beginning of the window, which opened at 8:33 a.m. ET, but the weather changed as that time inched closer.

Vice President Kamala Harris, who traveled to Kennedy Space Center in Florida with second gentleman Doug Emhoff to watch the launch, underscored the United States’ commitment to NASA’s Artemis program in comments made after the postponement.

“While we hoped to see the launch of Artemis I today, the attempt provided valuable data as we test the most powerful rocket in history,” Harris said via Twitter. “Our commitment to the Artemis Program remains firm, and we will return to the moon.”

The 322-foot-tall (98-meter-tall) stack is sitting on Launchpad 39B at NASA’s Kennedy Space Center in Florida.
NASA Administrator Bill Nelson addressed the scrub shortly after it was announced, stressing that Artemis I is a test flight.

It’s something Nelson has personal experience with. As an astronaut, he was on the 24th flight of the Space Shuttle. It was scrubbed four times on the pad and the fifth try resulted in a flawless mission.

“Had we launched on any one of those scrubs, it wouldn’t have been a good day,” he said.

Several issues cropped up after the rocket began fueling after midnight.

Offshore storms with the potential for lightning prevented the team from beginning the fueling process, due to start at midnight, for about an hour.

The hold was lifted at 1:13 a.m. ET, and the tanking process began to load the rocket’s core stage with supercold liquid oxygen and liquid hydrogen.

The team stopped filling the tank with liquid hydrogen twice due to an initial leak as well as a pressure spike, but tanking resumed for the core stage and began for the upper stage, or the interim cryogenic propulsion stage.
The team also discovered a line of frost on the inner stage flange. At first, engineers thought the frost may indicate the presence of a crack in the tank, but it turned out to be a crack in the external foam. The team shared that the issue had been resolved since the foam crack did not indicate a leak.

Engineers also experienced an 11-minute delay in communications between the Orion spacecraft and ground systems. The issue could have impacted the beginning of terminal count, or the countdown that begins when 10 minutes remain on the clock before liftoff. The team was able to work through the issue, which was the result of a simple misconfiguration.

In addition to the visit by Harris, appearances by celebrities like Jack Black, Chris Evans and Keke Palmer and performances of “The Star-Spangled Banner” by Josh Groban and Herbie Hancock and “America the Beautiful” by The Philadelphia Orchestra and cellist Yo-Yo Ma were planned as part of the program.

Mission overview
When Artemis I launches, Orion’s journey will last 42 days as it travels to the moon, loops around it and returns to Earth — traveling a total of 1.3 million miles (2.1 million kilometers). When it returns to Earth, the capsule will splash down in the Pacific Ocean off the coast of San Diego.

While the passenger list doesn’t include any humans, it does have passengers: three mannequins and a plush Snoopy toy will ride in Orion.

The crew aboard Artemis I may sound a little unusual, but they each serve a purpose. Snoopy will serve as the zero gravity indicator — meaning that he will begin to float inside the capsule once it reaches the space environment.
The mannequins, named Commander Moonkin Campos, Helga and Zohar, will measure deep space radiation future crews could experience and test a new suit and shielding technology. A biology experiment carrying seeds, algae, fungi and yeast is tucked inside Orion to measure how life reacts to this radiation as well.

Cameras inside and outside of Orion will share images and video throughout the mission, including live views from the Callisto experiment, which will capture a stream of Commander Moonikin Campos sitting in the commander’s seat. If you have an Amazon Alexa-enabled device, you can ask it about the mission’s location each day.

Expect to see views of Earthrise, similar to what was shared during Apollo 8 for the first time, but with much better cameras and technology.

Science experiments and technology demonstrations are riding in a ring on the rocket. The 10 small satellites, called CubeSats, will detach and go their separate ways to collect information on the moon and the deep space environment.

The inaugural mission of the Artemis program will kick off a phase of space exploration that lands diverse astronaut crews at previously unexplored regions of the moon and eventually delivers crewed missions to Mars.

The rocket and spacecraft will be tested and put through their paces for the very first time before they carry astronauts to the moon on Artemis II and Artemis III, slated for 2024 and 2025 respectively.

Correction: An earlier version of this story contained the incorrect height for the Artemis 1 stack on the launch pad.

Sign up for CNN’s Wonder Theory science newsletter. Explore the universe with news on fascinating discoveries, scientific advancements and more. 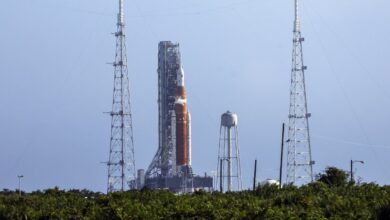 Next launch attempt of Artemis I set for Tuesday, but could delay due to tropical depression 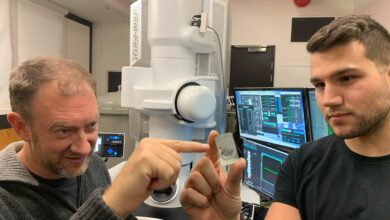 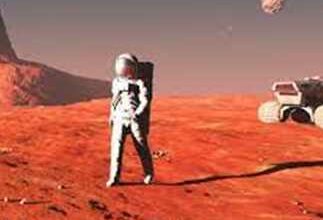 Video: For first time, NASA takes pictures that reveal the possibility of life on Mars