The local newspapers were more diverse than usual today as independent papers highlighted protests for Gaza and the state-owned press focused on President Mubarak’s much-hyped visit to Port Said.

Both Al-Ahram and Al-Akhbar ran pictures of Mubarak and news of his visit to the city on the Suez Canal above-the-fold on the front pages.

"Mubarak decides to extend work in Port Said’s duty free port to expand Port Fouad and to create a new city to accommodate a million people," read Al-Ahram, hyping this as "good news for the people of Port Said."

That newspaper also said that during his visit Mubarak has approved the creation of an independent university there. According to Al-Akhbar, the move will transform state-owned Canal University into an independent one. Both papers said that work on an airport in Port Said is also underway. Mubarak also attended the opening a military hospital and several petrochemical projects. Al-Akhbar added, in a sensational touch, that the people of Port Said gave Mubarak a rowdy welcome and that banners welcoming him covered the streets across the entire city.

Al-Wafd, Al-Dostour and Al-Shorouq devoted much space to–and Al-Ahram and Al-Akhbar ignored–protests held by foreign Gaza solidarity activists around Cairo yesterday. The activists gathered outside of the United Nations offices, the Giza zoo, and the French, Canadian, and Italian embassies. According to Al-Wafd, the protests against the blockade on Gaza caused "unrest in the capital" with activists representing 42 countries picketing the Egyptian government barring them entry to Gaza and turning back a Gaza-bound aid convoy.

Around 250 trucks filled with aid, including food and medical supplies, is stranded in Jordan and not allowed into the Hamas-controlled Gaza Strip because Egypt has insisted that the convoy can only pass through el-Arish, according to statements by Foreign Ministry spokesperson Hossam Zaki. The activists hoped to pass through the port of Nuweiba, which according to reports, is shortest and easiest route for the convoy.

The convoy is part of an initiative by British MP George Galloway, who has openly criticized the Egyptian government’s move.

Al-Shorouq said that the convoy has left Egyptian soil and is now in Syria, preparing to return to Egypt through the only route that the Egyptian government authorized. The newspaper carried quotes from an unnamed security source that the main reason the government is blocking the convoy is that "a large number of members of this convoy carry sympathies for and have been actively communicating with the Muslim Brotherhood for the purpose of organizing politically-motivated demonstrations in Egypt without the authorization of the Egyptian government."

The government’s impediment to the activists comes less than a week after reports from Rafah confirmed that an underground steel wall is under construction. The wall is intended to block smuggling tunnels between Egypt and Gaza. One of the protesters in Cairo told Al-Shorouq that the wall is a "measure that would only serve the enemy."

Gazans rely on the tunnels for goods including food, livestock, clothing, and cigarettes. Some of the tunnels are also used to bring arms into the Gaza Strip, which is a major concern for Israel and the United States and a source of pressure on Egypt.

Al-Dostour carried the fiery remarks issued on Monday by the Qatar-based Islamic Scholar Youssef al-Qaradawi in response to the controversial steel wall. The scholar said the wall is haram, or religiously forbidden, and that the Egyptian government has only succeeded in "blockading Gaza, starving it and humiliating it so that it will kneel down and give in to Israel’s demands. It’s as if the Egyptian government is telling Gaza, ‘Die so that Israel lives’," said al-Qaradawi.

Meanwhile, the Cairo protesters, "dressed in Palestinian scarves and chanting against Zionism," according to Al-Wafd, are demanding to be allowed into Gaza through Rafah, which is expected to be their next stop after Cairo. 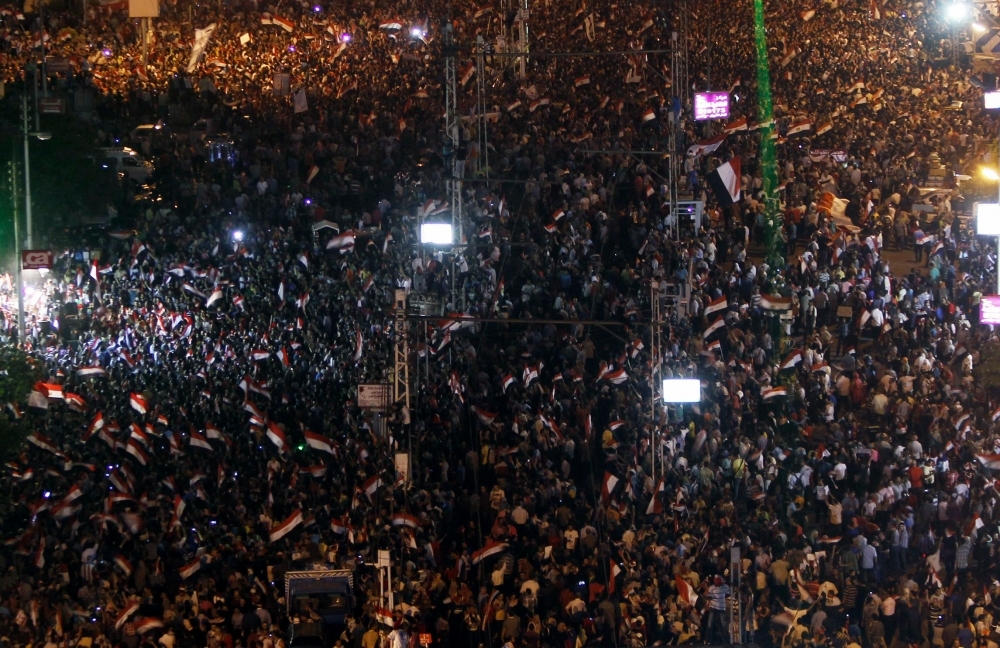 Thursday’s papers: Everyone’s invited, but no one wants to talk