Take a walk down Mahrany Street in the Cairene neighborhood of Fagala and it might feel strangely familiar. One mechanic’s workshop on the ground floor of Building 12 stands out in particular. In fact, it is where hundreds of scenes of people fixing their cars were shot for Egyptian films from the 1940s onward. In the tiny area between Buildings 12 and 14 and a wall — what is left of the famous Nassibian Studio, built in 1937 — lies the memory of numerous other film scenes. These three buildings were among the first sets for Egyptian cinema in the first half of the 20th century.

Mahrany Street was one of the most important film locations of the 1940s. It is where Nassibian, the Syrian-Armenian khawaga, set up his studio in Building 15 more than 75 years ago. The studio originally included a set, a film-processing laboratory and an editing unit. By the mid-1980s, it had produced 145 films and become the first real competitor to Studio Misr, established by prominent Egyptian economist and founder of Banque Misr, Talaat Harb, in 1935.

Old Aunt Suzie is the neighborhood sweetheart. She moved to her flat on 14 Mahrany Street when she married in 1964, and is one of the few living residents who witnessed film production on the street. Several movies were actually filmed inside her home. Some were also filmed at her in-laws’. Her mother-in-law lined the walls of her salon with photographs taken during filming. 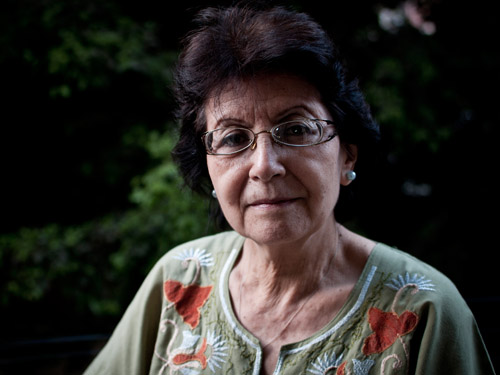 “We were happy that our home appeared on television,” says Aunt Suzie, adding that the entire neighborhood flourished at the time. The numerous film crews used to hand out generous tips to the street vendors and waiters working at local coffee shops, yet it was still more cost-effective for the production companies to film there.

Mohamed Khan, a key filmmaker of the Egyptian neo-realist cinema movement, explains that renting a real furnished flat was cheaper than building a similar set. Renting real-life apartments also served the movement, which strived to portray life as it really was.

Next to Aunt Suzie’s house, in Building 12, a number of significant Egyptian films were also shot. Sadly now, nothing remains of the set, following the collapse of the building’s walls in 2007. “It was one of the most beautiful houses in the neighborhood,” she remembers fondly. “The balconies were decorated with mosaic and carved wood.”

Building 12 provided the set for the famous 1961 hit, “Fi Baytena Ragol” (A Man in our House). Directed by Henry Barakat (1912-1997), the film tells the story of a young man Ibrahim, played by Omar Sharif, who resists the British occupation and the rule of King Farouk. Chased by police, he hides in the house of his colleague. Through their interaction with Ibrahim, the once apolitical middle-class family becomes fully immersed in ongoing events.

Adapted for the screen from a novel by the seminal writer Ihsan Abdul Quddus, “A Man in our House” opens with a scene of students at King Fouad University (now Cairo University) chanting: “Down with the king,” “Death to the enemies of our homeland,” and “Long live Egypt,” before they march to Ismailia, now Tahrir, Square. The story was inspired by an incident in 1945 when King Farouk ordered the Abbas Bridge opened while students were staging a protest there, causing scores to drown in the Nile.

Karim Hanafy, a young filmmaker who runs a cinema school set up after Nassibian Studio was nationalized in the 1960s, believes that 1960s cinema primarily served the 1952 revolution. “Its main objective was to establish legitimacy for the Free Officers coup on the street, dictating its goals to people [to seem] like a popular revolution.” Hanafy adds that former President Gamal Abdel Nasser established the Cinema Authority to act as a government tool to monitor screenplays and put an end to any controversial ones before they were produced.

Hanafy’s views are supported by the nationalization of the studio and its management’s assignment to the state-run Ramses Film Company. With nationalization, it turned from a major company producing 30 films a year before 1952, to a printing and processing lab. The number of annual co-productions dropped to four during the 1960s and 1970s, while the number of films processed in its laboratory multiplied. 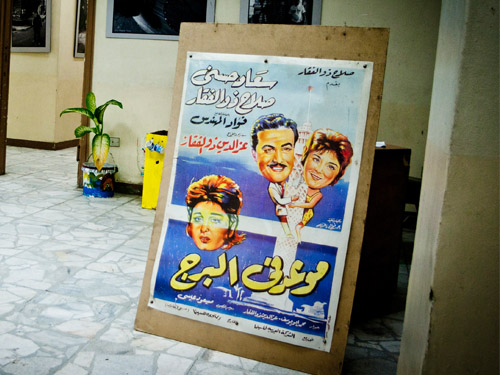 Aunt Suzie witnessed these changes firsthand on Mahrany Street. Although the number of films produced by the Nassibian Studio declined, the area remained a preferred set for filmmakers in the 1970s. “Khalli Balak Men Zouzou” (Take Care of Zouzou), a landmark film from the 1970s written by Egypt’s foremost colloquial poet Salah Jahin and directed by Hassan al-Imam, was shot in her flat.

Aunt Suzie says she was charmed by the humbleness and beauty of Egyptian sweetheart Souad Hosny, who starred in the film as Zouzou.

“Souad [Hosny] was funny and down to earth,” she says “I was happy she was in our home. We were all very comfortable around her, and did not feel we had a stranger among us.”

“Take Care of Zouzou,” produced in 1971, was far from ordinary. It brought Jahin, who was known to be close to political decision-makers, much criticism. Jahin wrote his social romance in the period of "no peace, no war" with Israel, when Egyptian students were staging protests calling for a declaration of war against Israel, at the beginning of President Anwar Sadat’s rule.

The 1970s was the beginning of a shift in Egyptian cinema toward social comedies like this one and “Al-Hafeed” (The Grandchild), filmed in 1974 in Building 12. Directed by the iconic Atef Salem (1927-2002), “The Grandchild” follows an Egyptian middle-class family with seven children of different ages. It was among the first films to tackle the issue of birth control and how some families did not accept it at the time.

Hanafy believes that 1970s production fell under two categories. The first was superficial commercial films known as “contractual films,” which went hand-in-hand with Sadat’s shift in economic policy, allowing private companies to venture into film production once again. “Most of them, sadly, were concerned with making quick returns.” The second was a more traditional one, which focused on economic and social issues and almost entirely ignored politics, he adds.

Although Nassibian was a private investor when he first set up his studio in the 1930s, his approach was very different from the private investors of the 1970s. Nassibian bought actual means of production and developed the industry, while others simply sought quick financial gains.

By the early 1980s, the Ramses Film Company no longer managed the studio. It was left abandoned, caught fire and burned to the ground. The state did not see Mahrany Street and its buildings as worth restoring, and put up the land, where the last wall of Nassibian Studio stands amid rubble and rubbish dumps, for sale. The Jesuit School purchased it and built El Nahda Association for Cultural and Scientific Renaissance, which in turn sponsored the creation of the Jesuit Cinema School to revive the legacy of Nassibian Studio.

But, with the closing of the studio, the entire Fagala neighborhood was affected. Building 12, which saw the making of some of the most important films in Egyptian cinema, collapsed in 2007, becoming home to a stray dog and her puppies, which Aunt Suzie continues to watch from her balcony.