The UK government is “deeply concerned” with the sentencing of British citizens by a pro-Russian court, the British prime minister’s deputy spokesperson said Thursday in a statement to CNN.

A court in the self-proclaimed Donetsk People’s Republic on Thursday sentenced to death three men — British citizens Aiden Aslin and Shaun Pinner and Moroccan national Brahim Saadoune — that it has accused of being “mercenaries” for Ukraine, according to Russian state media outlet RIA Novosti.

“We’ve said continually that prisoners of war shouldn’t be exploited for political purposes. Under the Geneva Convention, prisoners of war are entitled to combatant immunity, and they should not be prosecuted for participation in hostilities,” the British spokesperson said.

“We will continue to work with Ukrainian authorities to try and secure the release of any British national who was serving in the Ukrainian Armed Forces and who are being held as prisoners of war,” according to the spokesperson.

“This is a sham judgment with absolutely no legitimacy. My thoughts are with the families. We continue to do everything we can to support them,” she said on Twitter.

Ukraine’s grain crisis must be solved in a month to avoid “devastating consequences”: UK minister 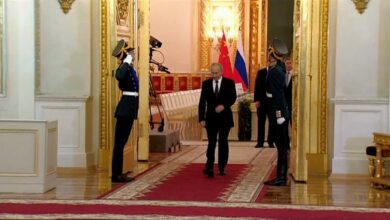 The Moscow stock exchange will remain closed on Friday