The White House reiterated some cautious optimism regarding Ukraine’s recent advances on Russian-held territory Tuesday, with John Kirby, National Security Council coordinator for strategic communications, saying it has been “swift and stunning.”

“They certainly have some momentum, particularly up there in the northeast part of the country in that Donbas region. You saw just from that report how swift and how stunning their advances have been,” Kirby said during an appearance on “Good Morning America.”

“There is more fighting to go, though, and in particularly down in the south where the Ukrainians are also trying to break through near Kherson city. They’ve made some incremental progress there. They’re facing a stiffer Russian resistance down south, but clearly up in that northeast region, there’s some momentum here by the Ukrainians, there’s no doubt about it,” Kirby said.

He noted that “weeks of planning” went into the offensive.

Pressed on threats to Russian President Vladimir Putin inside Russia, Kirby said the US is watching closely.

“It is very interesting to see, isn’t it now, that he’s facing some public rebukes not just from opposition figures, but from actual elected officials inside Russia. That’s not insignificant, and we’ll see where this goes. And we’re already starting to see signs that they’re going to probably start to crack down on some of these dissident elected officials. We’ll watch this carefully. But it is noteworthy that now even elected municipal officials are coming out speaking against Mr. Putin,” he said.
When asked if the US believes the table has been set for a diplomatic settlement, Kirby said, “I don’t know that we know we’re there yet,” saying he would defer to Ukrainian President Volodymyr Zelensky.
“Mr. Putin has shown no inclination to stop the prosecution of this war against the Ukrainian people, as we saw with his retaliatory strikes and in Kharkiv just over the over the weekend. So I don’t think we’re there yet. Obviously, President Biden fully supports a diplomatic end of this war, an end that we’d like to see today if possible, but I just don’t know that we’re on the horizon right now,” he said.
Tags
cautious optimism coordinator John Kirby National Security Council reiterated Russian-held territory strategic communications Ukraine’s recent advances White House 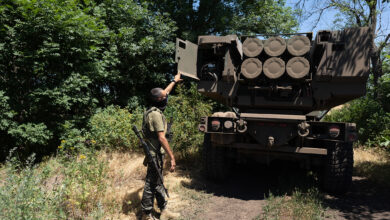