On 24 September, Egyptian poets celebrated World Poetry Movement Day with recitations across Cairo, the most notable of which was the "100 Thousand Poets for Change" event organized by the Independent Arts Coalition, at downtown's Rawabet Theater.

As usual, few audiences showed up to the recitations, begging the questions: Why have people stopped reading poetry and can the Egyptian revolution bring audiences back to this literary form?

Four Egyptian poets shared their views on the topic.

Dawood is among the most prominent free verse writers of the ‘80s. He published his first collection of poems titled “Details” in 1989. His style is abstract, and focuses on the individual’s experience as a theme.

Reluctance to read poetry is a worldwide phenomenon. However, this is not necessarily a bad thing. Poetry has always drawn a few fans. Salah Abdel Sabour, for instance, was a great poet. Yet, very few people know and read his works. The same applies to Amal Donqol. People tend to be attracted to popular themes like criticizing political corruption, regardless of a poem’s artistic quality.

Despite the declining audience base, creativity among Egyptian poets is rising. I can easily cite the names of 25 good poets from different generations. I attribute this poetic renaissance to the absence of critics, which paved the way for more experimentation with form and themes. Even prominent critics like Salah Fadl and Gaber Asfour do not recognize more progressive stylistic developments.

I do see increased interest in poetry since the revolution began. Publishers and media outlets, however, are too conservative to introduce new forms. It is easier to present the work of a poet who meets the audience's expectations, and that's what curtails innovation.

I published a poem entitled “From Tahrir Square” early on in the revolution. Although it was well-received and published on a number of websites and newspapers, I decided not to republish it, as it does not really represent my writing.

I am not trying to be too proud. I do though feel glad when the reader makes some effort to obtain knowledge, instead of reading the typical works that provide easy answers to their queries. Poets who focus on pleasing readers actually harm poetry.

Haddad is a colloquial poet who also belongs to the ‘80s generation. His poems are mostly political, simple yet deep, and he likes to recite them while playing the lute. Among his most notable poetry collections is "Replacement."

I do not see people losing interest in poetry. For years now, I have witnessed young people sharing the poems of Mahmoud Darwish, Nezaar Qabbani, Salah Jahin and Fouad Haddad online. Some write the poems as they are while others adapt and reinterpret them.

Poetry is not meant to be read in the first place. Like singing, people should listen to poetry through recitations. Even those who decide to read poetry at home should do it out loud until they are overtaken by its rhythm.

I am not implying though that poetry is being widely embraced; major problems lie with our educational system, and we are not taught to read and appreciate poetry. This is made worse by the unappealing way the media presents poets, whereas whenever poetry is mixed with music, people do show up to listen.

The revolution offers opportunities for poets and the public to reconnect. We are witnessing major changes that everyone can relate to, and the revolution is becoming a recurring theme in poetry, making poets move away from emphasis on individuality that has characterized their writings for decades.

I personally discovered that my views and feelings about my community, which I used to believe were unmatched, are incomparable to the way many people felt on 28 January. I realized that I am part of a community; I speak the same language and this is reflected in my recent writings. Over the coming years, poets will move away from melancholy and despair that has been so characteristic of their work, and the revolution will become everybody's personal history.

Youssef writes free verse in Modern Standard Arabic. He belongs to the ‘90s generation of poets and is known for experimenting with language, often including Sufi adages in his writing.

Those who declare the death of poetry see poetry as rigidly confined to a particular style. I believe that poetry develops along with the reader. And new meanings are created as the reader engages with the poem. This is why I celebrate innovative poetry whether it is rhymed or versed, Arabic or foreign, or even coming from Pluto, if there are poets on that distant planet.

As for the effect of the revolution on poetry, I do not think poets have to use their works as a political platform. But, are we not all involved in politics, anyway? A poem should be judged for its success in reflecting the reality of human experience. It’s not about filling the poem with specific slogans or ideologies, but creating a space for readers to navigate.

Shabbany is a lyricist-poet born in the '90s who writes in the colloquial Egyptian dialect. He finds inspiration in Egyptian folklore and his prominent collection of poems “An Inch or Two” is inspired by popular children’s songs.

Very few people read in general. And this might be natural in a country that suffers from high poverty and illiteracy.

The Mubarak regime promoted low-quality works at the expense of good ones. It repeatedly excluded serious artistic works so as to distract the public from local conditions.

Several movements in poetry have focused on form at the expense of ideas, and the state encouraged this through awards and publishing prospects.

At the same time, state-run media often presented poets as stereotypical and cartoonish characters, who are detached from society. To sum up, I see the alienation of poets as the work of a corrupt political regime.

The revolution will allow more experimentation in poetry. Still, poetry was always present. It was an instigator for protesters as well as a tool for dissent that inspired many slogans and chants. 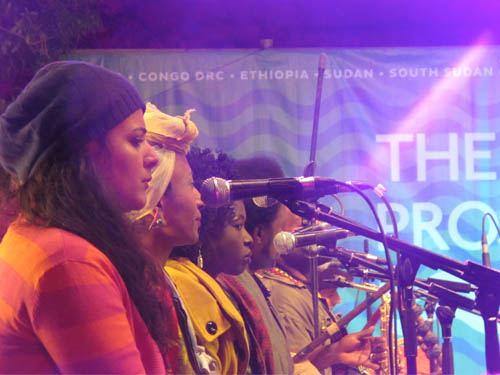