“I am proud to announce our biggest tranche of security assistance to date: approximately $2.98 billion of weapons and equipment to be provided through the Ukraine Security Assistance Initiative. This will allow Ukraine to acquire air defense systems, artillery systems and munitions, counter-unmanned aerial systems, and radars to ensure it can continue to defend itself over the long term,” Biden said in a statement Wednesday.

Because this package falls under the Ukraine Security Assistance Initiative (USAI), it will not be drawn from existing US inventories. Instead, it will come from contracts with arms manufacturers, according to a US official.

Last week, the US announced a $775 million package that included HIMARS and 105mm howitzer ammo, anti-armor missiles, mine-clearing capabilities and more. That package came through Presidential Drawdown Authority, which means it will be pulled directly from US stocks.

Biden also congratulated the people of Ukraine on 31 years of independence, noting that the country has “inspired the world,” and added that the US “looks forward to continuing to celebrate Ukraine as a democratic, independent, sovereign and prosperous state for decades to come.”

CNN’s Oren Liebermann and Ellie Kaufman contributed to this report. 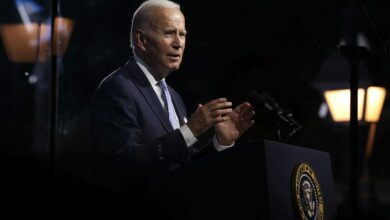 Biden to speak at 9/11 remembrance ceremony at Pentagon