Coptic writers and researchers expressed their fears of the possibility of Islamic rule.

"Egypt is on the way to becoming another Iran or Taliban," says Egyptian Human Rights Federation Director Naguib Gabriel. "If we ever hold free elections, the Islamic trend will inevitably win and rule," he added. "For government corruption, intolerance of other religions, and Egypt’s negligible weight among world nations have all created the right circumstances for the Islamic trend to grow in society."

Coptic journalist Youssef Sedhom agrees. "Poverty and unemployment make people cling to religion as a means of salvation," Sedhom says. "Egypt must improve the economy and education in order to put society’s distorted culture back on the right track."

Ayman Girgis, a Coptic lawyer, is equally concerned. "Egypt is heading for a conservative religious trend that believes in myth," says Girgis. "We became concerned when the Muslim Brotherhood group won 88 seats in parliament. And we are more concerned with what the extremist Islamic satellite channels say about us Copts. They say we should be treated as second-class citizens."

Not everyone, however, is so pessimistic. Coptic researcher Wasim el-Sisi believes that Egypt may be headed in a better direction. "The world has become one global village," el-Sisi says. "The rule of law will have to prevail inevitably. This happened in the US after long years of racial discrimination, and will, without a doubt, happen here." 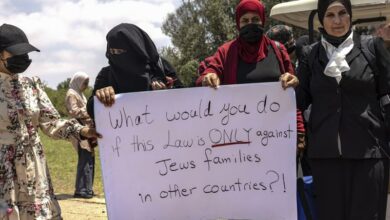