The Downtown Contemporary Arts Festival kicked off its dance offerings Friday afternoon with a series of performances in Borsa, a popular cafe area near the Egyptian Stock Exchange, drawing a mix of dance patrons as well as a number of bystanders attracted to the spectacle. Placing the dance performance outdoors, in a public space like Borsa, allowed the dancers to play with the boundaries between ordinary movement and performance, and between spectator and performer.

The beginning of the first piece, “Apparement, ce qui ne se voit pas” (“Showing that which is not seen”) by the French group Ex Nihilo, had the feeling of a flash mob. The performers, dressed in ordinary street clothes, blended into the crowd so that at times they seemed to disappear only to reappear with a new movement sequence. Watching the movement itself felt a little like breaking rules — the dancers interact with the space in ways most people have probably thought might be fun but assume they’d get in trouble for: swinging on chains, hanging off streetlamps, jumping and climbing on the walls.

Young Egyptian choreographer Nadine Emile’s piece, entitled "Entity," was up next in the center of the crowd, a stark piece set only to the sounds of the performer’s deliberately sharp breaths, a series of restrained movements in chairs which felt like frustrated attempts at liberation. Another young Egyptian choreographer Mounir Saeed performed a contemplative solo called "Small Story." 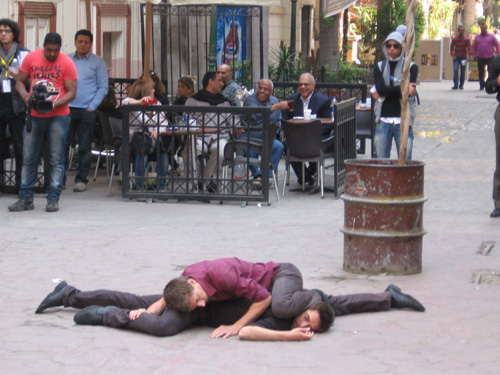 The clear standout piece among a group of pieces well worth watching was "entomo," a duet by Spanish performers Elias Aguirre and Alvaro Estaban. At times they seemed to be distinctly non-human creatures playing and fighting, and at other times looked like ordinary guys you might see dancing at a club. The effect was fresh and delightfully weird. The final piece, "Murikamification" by Erik Kaiel and Archeoptrix8, broke down whatever was left of the fourth wall by venturing directly into the crowd, who mostly responded by politely making room.

As one might imagine, the sight of people hanging off the side of the wall and standing on top of each other drew in a number of casual spectators off the street nearest to the stock exchange and from the cafes, as well as local shopkeepers and the attendants of a truck that had been carrying goods through the center of the pedestrian road and found itself unexpectedly blocked.

In general the audience, even those who weren’t expecting it, seemed to enjoy the show, giving a hearty round of applause after each piece and filming the dancers on cell phone cameras throughout. A group of police officers gave the show two thumbs up, saying it was the first time they’d seen something like this. Visual artist Hossam Hassan came to see the performance with his young son. He says he takes his son to all kinds of performances and art shows “so that he learns that this is what freedom is, that people should do this.”

“I feel that Egypt needs to understand art,” Hassan says, “so that it can go back to being kind and good-natured, not to get overwrought because of the pressures coming from all directions. We should go back to having festivals in the streets, every week there should be festivals. Art exists in order to make people better, more ethical, to make people live simply and love God.”

Reviews were more mixed among the group with the truck that was stopped, who were entertained but mostly ready to get on with their work by the time all the performances finished. One older gentlemen was less than impressed, saying he thought the performers looked like monkeys, but one of his colleagues shushed him. “He doesn’t get it. It was great!”

Performers will present the show again with a slightly different lineup on Sunday 1 April, with one showing at 2 pm in front of Radio Theatre and a second at 6 pm in the American University in Cairo’s now abandoned Greek Campus.