Facebook Twitter LinkedIn
The extended detention of a young Egyptian who came to be known to many as the "anti-torture t-shirt" detainee is "illegal", say 13 human rights organizations.
In a joint statement issued Tuesday, the rights groups strongly condemned the court decision on February 7 to extend the detention of Mahmoud Mohamed Hussein who has been in detention since January 25, 2014 which marked the third anniversary of the 2011 uprising.
Just a high-school student, Hussein, 20, has won over the sympathy of many because he was arrested while wearing a campaign shirt for an anti-torture group, called Nation Without Torture.
Last month, the duration of his detention exceeded two years, which is the pre-trial detention limit set by Egyptian law.
Hussein is accused of belonging to a terrorist organization, possessing explosives, protesting and inciting protest, according to lawyer Mokhtar Mounir from the Association of Freedom of Thought and Expression (AFTE).
Mounir, Hussein's defense lawyer, filed a complaint with the Supreme Judicial Council, protesting Hussein's renewed detention, which was extended by  45 days in breach of article 143 of the code of criminal procedures.
Mounir told Aswat Masriya that that Supreme Judicial Council should issue a recommendation to release Hussein or send a memorandum to the public prosecution calling for his release.
Article 143 of the Code of Criminal Procedure states that no person may be held in custody pending investigation or trial for more than two years, in connection with charges carrying a life sentence or death.
"The detention renewal is a clear violation of the law, so we filed a complaint to the highest judicial body in the country, which is entrusted with the supervision of judges and monitoring the implementation of the law," Mounir told Aswat Masriya.
The rights organizations, which include the Egyptian Initiative for Personal Rights and the Cairo Institute for Human Rights Studies, called on the judicial body to consider in a timely manner the complaints and memos it has received regarding Hussein's case. They also called on the prosecution to "check its gross violation of the law" and immediately release Hussein.
"Pretrial detention has become a means to punish and restrict the freedom of defendants who under the constitution and law are innocent until proven guilty," the rights groups said.
Hussein  has not been referred to trial, but is being held pending investigation. According to Mounir, when a detainee is referred to court, there is still legal debate regarding the validity of extending the pre-trial detention beyond its limit. However, in the case of Hussein, there is no debate because he has not even been referred to court.
Hussein's older brother Tarek, known as 'Tito', has been campaigning for his brother's release for the past two years. In his latest appearance in a video posted by The Guardian marking the fifth anniversary of the 2011 Uprising, Tarek said that he was proud that people haven’t forgotten Mahmoud.
"Forgetting a prisoner is worse than their imprisonment," Tarek said in the video.
Last month, just a day after Hussein spent two years in detention, Amnesty International said in a statement that he is "is yet another appalling example of the ruthless and repressive tactics Egypt is resorting to in a bid to crush dissent."
The international watchdog says, "Hussein is among more than 700 detainees held for more than two years without being sentenced across the country."
Tags
anti-torture t-shirt human rights organisations Nation Without Torture Pretrial detention student Mahmoud Mohamed Supreme Judicial Council 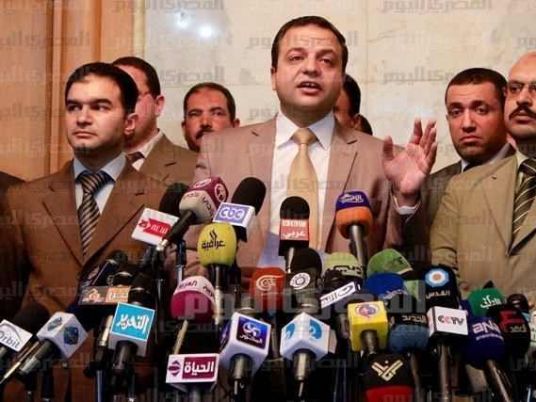