Egyptian authorities say they are fighting a war on terror at home and abroad, but that hasn't stopped the Miss Germany beauty pageant from organizing a flashy preliminary contest near the Red Sea resort of Hurghada.

Egypt's Red Sea resorts have taken a big hit financially since the country's 2011 uprising, but they still seem a world away from the budding insurgency in the northern Sinai Peninsula, where militants have killed scores of security forces, and the lingering political tensions in Cairo and other cities, which still see occasional demonstrations and small-scale attacks.

There was little talk of the unrest at the luxury Kempinski Hotel in Soma Bay, a walled-off colony where mostly Western Europeans and wealthy Egyptians come for sea, sand and sun. On Tuesday night, house music boomed, wine flowed, and lights danced off the smoke machine haze as 24 German women wearing bikinis made their way down the catwalk. 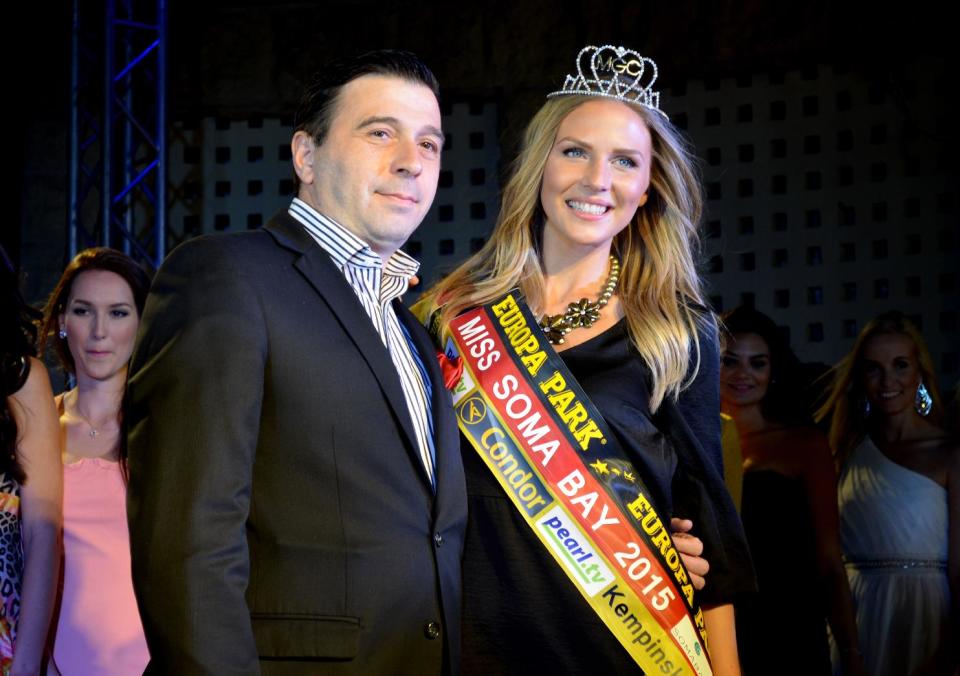 "Everything is safe and good and we're all sealed off from everything," said Olga Hoffmann, who won the trial run.

Soma Bay is part of a string of resorts billed as Egypt's "Red Sea Riviera," known for world-class diving and sandy beaches that are open year-round. The resorts lie across the Red Sea from Sinai, and have been spared the violence gripping the northern part of the peninsula — an area heavily guarded by Egyptian security forces and local tribes.

Tourism took a dive after the 2011 uprising toppled longtime President Hosni Mubarak and unleashed years of turmoil. The unrest peaked in the summer of 2013 when the military toppled his divisive successor, the Islamist Mohammed Morsi, and launched a massive crackdown on Morsi's supporters. 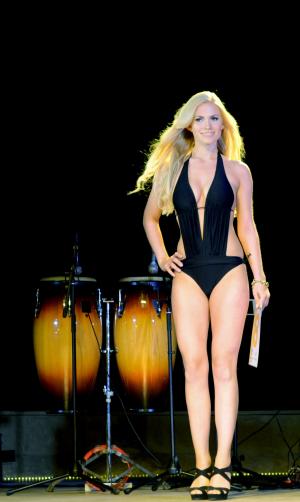 Joanna Orthey, a contestant in a preliminary Miss Germany competition poses on a stage in Egypt’s Red Sea resort of Soma Bay

The demonstrations and unrest have gradually declined since then, and tourists have started to return. The Tourism Ministry says 9.9 million tourists came to Egypt in 2014, a slight increase from the previous year, driven by a 47 percent surge from Eastern Europe — notably 3.1 million Russians. Americans and Western Europeans are still largely avoiding Egypt, in part because of government travel warnings.

Revenues for the first half of the year were only $3.2 billion, compared to an annual $6 billion the year before and $12.5 billion at the industry's peak in 2010. Ministry officials say the Russians typically stay in southern Sinai, where their tour operators drive hard bargains for all-inclusive deals. Their spending capacity has also been limited by the recent, drastic fall of the rouble.

The Egyptian government is eager to revitalize the tourism sector, and has unveiled a series of new measures, including more security cameras at hotels and popular tourist destinations, mandatory background checks for tourism workers, tougher airport security and a system to monitor hotel health standards.

Tourism investment is also a key goal for an upcoming economic conference in March, which authorities hope will restore foreign confidence in a variety of sectors.

As the Miss Germany contestants snorkeled over lush coral a day after their pageant, organizer Ralf Klemmer said that if he had any fears about security, they wouldn't be here.

"We've heard about some bad news elsewhere, but here on the Red Sea it's simply splendid," he said. "Besides, look at what happened in Paris, or Germany, where a Carnival parade was cancelled over security concerns. Attacks nowadays can happen anywhere."

The Soma Bay contest is a warm-up — the real Miss Germany selection will take place later this month in Germany.