The Egyptian Football Association (EFA) published a statement on its official Facebook page claiming that the EFA twitter accounts defaming Liverpool star Mohamed Salah over the past few days were all fake.

Their statement reads, “The EFA board, headed by Hany Abu Rida have succeeded in convincing Twitter’s board to close all fake accounts created in the names of the EFA members.”

“Twitter’s administration went on to stress on the fact that official accounts always had a blue mark to distinguish them,” continued the statement.

“EFA legal consular Hussein Helmy has also issued a complaint to the general prosecutor, about the existence of fake accounts in the names of EFA president Hanu Abu Rida, as well as board members Magdy Abdel Ghani, Karam Kordi and Khaled Latif, who have been passing as them to entice public outrage” they said. 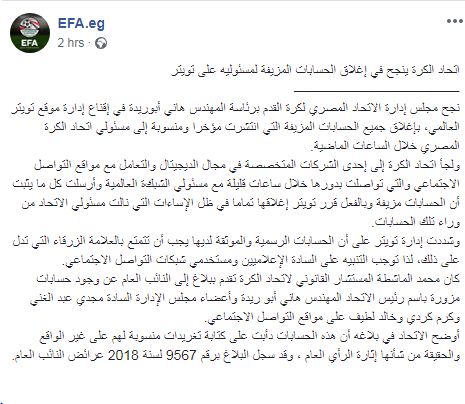 The statement continued to stress that the EFA “does not deal except through its official Facebook and Twitter accounts titled ‘EFA.EG’, which are the only platforms by which the EFA expresses its opinions.”

They said that the EFA is not responsible for any other pages or accounts, and has begun their official lawful proceeding against the pages as publishing false news is an offense punishable by Egyptian law.

EFA member Magdy Abdel Ghani explained that he did not use Twitter, and it made no sense for him to attack any member, according to a separate press release on EFA’s Facebook page.

Ghani added that he held all the love and respect for Salah, and was prepared to travel to the UK to convene with him and explain everything, as it did not make sense for him to insult such as player, who hold the highest respect of his audience worldwide.

He faced backlash for reportedly defaming Salah on Twitter. 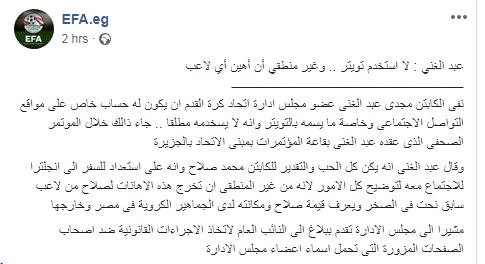 Yesterday, EFA spokesman Ahmed Megahed announced that the EFA had taken into careful consideration all of Salah’s comments in order to help improve the conditions for the national team.

He added that the EFA has never spared an effort in creating a comfortable atmosphere for the Egyptian National Team to “perform their national duty.”

Megahed said he believes the EFA’s effort were reflected in the national team’s great performance, as they were able to make it to the World Cup for the first time after a 28-year absence.

Regarding Salah’s requests, Megahed explained that this was the first time the EFA ever heard them.

He congratulated Salah for his respectable tone when speaking, and announced that the monetary requests were trivial compared to the amount of money the EFA spends on the national team. Megahed went on to state that the EFA has concluded a revision to the two past stages to improve themselves and avoid repeating the same mistakes.

He concluded that security will be added for all national team members equally.

On August 27, the EFA published a statement on its Facebook page to try to amend ties between them and Salah, after the two were attacking each other for days. The EFA said that Salah was oneof its “best players” and blamed his agent Mohamed Abbas for the row between them and the player.

The EFA said that the letter that Abbas sent to the EFA president was unprofessional and that it would “not allow a third party between itself and its sons.”

In early August, Salah sent a list of non-negotiable demands to the EFA, which included distancing himself from the national team and federation “outside the pitch”, according to Al-Youm Al-Sabae.

One of Salah’s demands called for a response from the EFA before 27 August, but an alleged lack of a meaningful response led Salah to call out the association on Twitter.

Salah’s list, according to Al-Youm Al-Sabae, included the demand that Salah only be asked to participate in 90 minutes of each game – and otherwise have nothing to do with either the National Team or the Federation outside the field.

Salah would also provide neither interviews nor photographs, and would not take part in any press conferences except for referring to his agent for permission.

In addition, the EFA would be responsible for providing Salah with personal bodyguards to accompany him to hotels, restaurants and the bus. Salah would also not be obliged to take part in any ads concerning the national team, and any photo of his would not be used unless the EFA asked his agent first.

The EFA responded by publishing a statement across twitter accounts, which they now claim are fake, referring Salah to a disciplinary committee.

Salah’s issues with the EFA stretch back to before the World Cup in June, when the association used Salah’s photo on the national team bus without his permission. This caused him copyright issues with his sponsors.

Mohamed Salah rose to football fame between 2017 and 2018, displaying a spectacular season with Liverpool in the Premier League, leading his team to the UEFA Cup final, and being named the Top Scorer of Premier League, in addition to many awards, including the prestigious Golden Boot.

The player is currently a contender for UEFA Men’s Player, battling with football greats Cristiano Ronaldo and Luka Modric, with the results to be announced 30 August.

Liverpool eyes Ibrahim Adel as ‘the next Mohamed Salah’: Report