Egyptian-Canadian artist Tarek Abouamin has a series of 48 unique photographs currently showing at the Cairo Opera House, in a show entitled “An Egyptian Memoir.” The pictures, all black and white images, depict the artist’s relationship with the homeland he can no longer call home. Abouamin, a filmmaker, has been living in Nova Scotia, Canada for the past 15 years. Besides his work on award-winning films, he is also a professor of film production at NSCAD University in Halifax. Abouamin hold a strong interest in other artistic mediums as well, including architecture, theatre, and photography, as can be seen in “An Egyptian Memoir”, his first exhibition in Egypt.

“For years I have dreamed of sharing my work publicly in Egypt,” says thirty-four year old Abouamin, who is thrilled that his first show will be held at the Cairo Opera House. Although, according to the artist, an exhibition such as this might not be what he originally had in mind.

“My pictures were never intended to be placed on walls. Honestly, I am not sure what I intended on ever doing with them. I guess I was collecting my memories, holding on to moments that I thought were special; saving them for myself and for my family.”

The sincerity of the scenes depicted in Abouamin’s images might be what makes them so captivating, and also hauntingly familiar. The strength of images like “Sohair & Laila” and “Magda” lies in the fact that they represent relatable scenarios, like childhood memories that have been hazily recalled, while other pieces such as “Adam and Eve” and the “Work” series perfectly capture the irony and subtle beauty found in the drudgery of everyday life. While the images are all generally effective, the true standout is “Grandchildren” which, like all good memories, evokes a strong sense of comfort and yearning.
“[These] pictures are my Egypt. We all write our story, we invent ourselves. I search for a definition of self and home.”

Abouamin admits his search has not been easy. “I am in limbo, caught between two places, forced to negotiate my Egyptian-ness in Nova Scotia, and my Canadian-ness in Egypt. My photographic work has been the place of that dialogue. Despite the fact that my photography has been a private ongoing project and rarely seen outside a small circle of friends, the work’s timing is evermore necessary.”

Perhaps it’s no surprise that Abouamin’s family seems to be a recurring theme in his work, since his father was the one who sparked his interest in photography. “I was eleven in 1986,” Abouamin recalls, “the year my father gave me my first camera during a summer trip to Singapore. I remember strapping that little Minolta point-n-shoot to my side and taking it everywhere I went. I took as many pictures as I could, or I should say, as many rolls of film as my parents cared to pay for!”

“Unknowingly,” he says, “my father set me on a path of photographic mastery.” Over the years, Abouamin has successfully managed to master his hobby to his advantage as a filmmaker. “Its a wonderful discipline that has developed and sharpened my photographic skills.”

According to Abouamin, “An Egyptian Memoir” marks the “beginning of an artistic dialogue with Egypt where my roots are deeply seeded.” 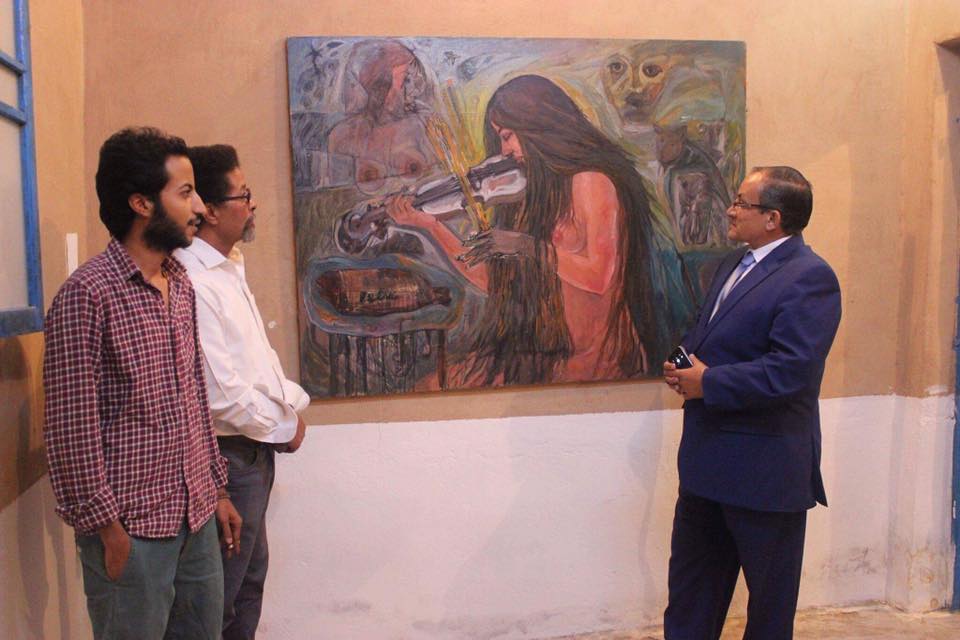 Arabic calligraphy: Not yet a lost art