Elon Musk has completed his $44 billion deal to buy Twitter, a source familiar with the deal told CNN Thursday, putting the world’s richest man in charge of one of the world’s most influential social media platforms.

Musk fired CEO Parag Agrawal and two other executives, according to two people familiar with the decision. Twitter declined to comment.

The deal’s closing removes a cloud of uncertainty that has hung over Twitter’s business, employees and shareholders for much of the year. After initially agreeing to buy the company in April, Musk spent months attempting to get out of the deal, first citing concerns about the number of bots on the platform and later allegations raised by a company whistleblower.

By completing the deal, Musk and Twitter have avoided a trial that was originally set to take place earlier this month. But Musk’s takeover, and the immediate firings of some of its top executives, now raises a host of new questions for the future of the social media platform, and the many corners of society impacted by it. Musk on Thursday also fired CFO Ned Segal and policy head Vijaya Gadde, according to the two sources.

Musk has said he plans to rethink Twitter’s content moderation policies in service of a more maximalist approach to “free speech.” The billionaire has also said he disagrees with Twitter’s practice of permanent bans for those who repeatedly violate its rules, raising the possibility that a number of previously banned, controversial users could reemerge on the platform.

Perhaps most immediately, many will be watching to see how soon Musk could let former President Donald Trump back on the platform, as he has previously said he would do. Depending on the timing, such a move could have major implications for the upcoming US midterm elections, as well as the 2024 Presidential campaign.

In taking those steps, Musk could singlehandedly upend the media and political ecosystem, reshape public discourse online and disrupt the nascent sphere of conservative-leaning social media properties that emerged largely in response to grievances about bans and restrictions on Twitter and other mainstream services.

Earlier this week, Musk visited Twitter’s San Francisco headquarters to meet with employees. He also posted an open letter to Twitter advertisers, saying he doesn’t want the platform to become a “free-for-all-hellscape where anything can be said with no consequences.”

The acquisition also promises to extend Musk’s influence. The billionaire already owns, oversees or has significant stakes in companies developing cars, rockets, robots and satellite internet, as well as more experimental ventures such as brain implants. Now he controls a social media platform that shapes how hundreds of millions of people communicate and get their news.

A deal that went off the rails

Even for Twitter, a company known for a certain amount of chaos over its history, the months-long deal process with Musk was turbulent.

Musk, a prominent and controversial Twitter user, became involved with the company earlier this year when he built up a more than 9% stake in its shares. After announcing he had become Twitter’s largest shareholder, Musk accepted and then pulled out of an offer to sit on the company’s board.

Musk then offered to buy Twitter outright at a significant premium, threatened a hostile takeover and signed a “seller-friendly” deal to buy the company that involved waiving due diligence.

This is not a way to make money,” Musk said in an on-stage interview shortly after making an offer to buy Twitter. “My strong intuitive sense is that having a public platform that is maximally trusted and broadly inclusive is extremely important to the future of civilization.”

Musk also pledged to “defeat the spam bots or die trying,” referring to the fake and scam accounts that are often especially active in the replies to his tweets and those of others with large followings on the platform.

Within weeks of the acquisition agreement, however, Musk began raising concerns about the prevalence of those same fake and spam accounts on Twitter and ultimately attempted to terminate the deal.

Twitter sued him to follow through with the agreement, alleging that Musk was using the bot argument as a pretense to get out of a deal for which he had developed buyer’s remorse. In the weeks after the deal was announced, much of the stock market, including social media companies, declined amid concerns about rising inflation and a looming recession. The downturn also hit Tesla and, in turn, Musk’s personal net worth.

Legal experts widely believed that Twitter was on strong footing to have the deal enforced in court. Two weeks before the contentious legal battle was set to go to trial, Musk said he would follow through with the deal on its original terms after all. As the parties negotiated, Musk’s attorneys asked a judge to stay the legal proceedings, prompting pushback from Twitter, which feared that Musk might not stay true to his promise to close the deal.

In a sharp response, Twitter’s lawyers wrote that Musk had been attempting to exit the deal and “now, on the eve of trial, Defendants declare they intend to close after all. ‘Trust us,’ they say, ‘we mean it this time.’”

With the deal drama out of the way, attention now turns to Musk’s plans for Twitter.

Beyond the removal of Twitter’s CEO and other executives, Musk’s takeover could also usher in the return of some measure of influence over the company by founder Jack Dorsey, who stepped down as CEO in November and left its board in May. While Dorsey has said he will not formally return to Twitter, he has privately discussed the takeover with Musk and offered advice.

Musk has also reportedly told prospective investors in the deal that he planned to get rid of nearly 75% of the company’s staff, in a move that could disrupt every aspect of how Twitter operates. He previously discussed dramatically reducing Twitter’s workforce in personal text messages with friends about the deal, which were revealed in court filings, and didn’t dismiss the potential for layoffs in a call with Twitter employees in June.

Under Musk, Twitter may not have use for many of its existing staff. Musk has repeatedly made clear he would overhaul Twitter’s content moderation policies and bolster what he calls “free speech,” potentially undoing years of efforts from the company to address misinformation and harassment and to create “healthier” conversations on the platform.

Such a move could also have ripple effects across the social media landscape. Twitter, although smaller than many of its social media rivals, has sometimes acted as a model for how the industry handles problematic content, including when it was the first to ban then-President Trump following the January 6 Capitol riot.

Under Musk, Twitter may not have use for many of its existing staff. Musk has repeatedly made clear he would overhaul Twitter’s content moderation policies and bolster what he calls “free speech,” potentially undoing years of efforts from the company to address misinformation and harassment and to create “healthier” conversations on the platform.

Such a move could also have ripple effects across the social media landscape. Twitter, although smaller than many of its social media rivals, has sometimes acted as a model for how the industry handles problematic content, including when it was the first to ban then-President Trump following the January 6 Capitol riot.

And in recent years, several alternative social networks have launched largely targeting conservatives who claim more mainstream services unduly restrict their speech. These services include Trump’s Truth Social and Parler, which Kanye West recently said he would acquire. While it’s unclear how far Musk could go in fulfilling his free speech dreams, any loosening of existing content moderation policies could effectively make Twitter, which provides a much larger audience, a more enticing service for some of the users who have fled to those smaller, fringe services. (Musk, however, could run into regulatory issues, especially in Europe, depending on how far he takes his efforts to loosen content restrictions.)

Zelensky thanks US for $2.5 billion security package 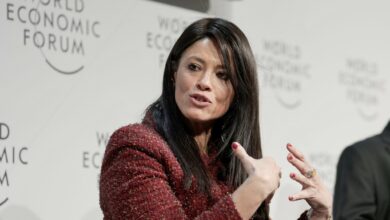 Mashat in Davos 2023: Climate change is a major global challenge