French lawmakers on Thursday urged their government to recognise Palestine, a symbolic move that will not immediately affect France's diplomatic stance but demonstrates growing European impatience with a stalled peace process.

While most developing countries recognise Palestine as a state, most Western European countries do not, supporting the Israeli and U.S. position that an independent Palestinian state should emerge from negotiations with Israel.

European countries have grown frustrated with Israel, which since the collapse of the latest U.S.-sponsored talks in April has pressed on with building settlements in territory the Palestinians want for their state.

The motion received the backing of 339 lawmakers with 151 against.

It comes after Sweden became the biggest Western European country to recognise Palestine, and parliaments in Spain, Britain and Ireland held votes in which they backed non-binding resolutions in favour of recognition.

The text, proposed by the ruling Socialists and backed by left-wing parties and some conservatives, asked the government to "use the recognition of a Palestinian state with the aim of resolving the conflict definitively".

Neither Foreign Minister Laurent Fabius nor Prime Minister Manuel Valls attended the vote in parliament. The government has said it will not be bound by the result.

"We don't want a symbolic recognition that will only lead to a virtual state," Europe Minister Harlem Desir told lawmakers in reaction to the vote. "We want a Palestinian state that is real so we want to give a chance to negotiations."

Palestinians say negotiations have failed and they have no choice but to pursue independence unilaterally.

Fabius said on Nov. 28 the status quo was unacceptable and France would recognise an independent Palestine without a negotiated settlement if a final diplomatic push failed.

He backed a two-year timeframe to relaunch and conclude negotiations and said Paris was working with Britain and Germany on a text that could be accelerated if a separate resolution drafted by Palestinians is put forward.

The vote in Paris has raised domestic political pressure on France to be more active on the issue. A recent poll showed more than 60 percent of French people supported a Palestinian state.

France has the largest Jewish and Muslim populations in Europe and flare-ups in the Middle East tend to aggravate tensions between the two communities.

Right-wing lawmakers criticised the Socialist majority for backing Palestine recognition to win back support from Muslim voters who were dismayed by a gay marriage law passed last year and President Francois Hollande's apparent support for Israel's intervention in Gaza.

"It will add fuel to the fire in a region that doesn't need that at all," said Christian Jacob, leader of the conservative UMP party in parliament. 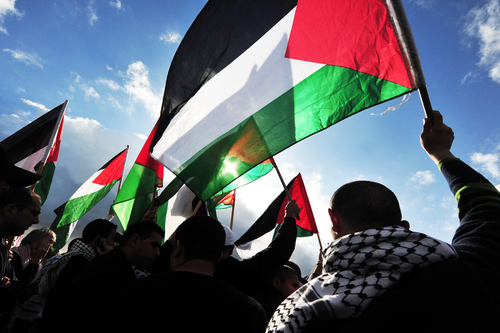