Over the past month, a hazy green light has emanated from a window of the Contemporary Image Collective, overlooking downtown’s bustling Abdel Khalek Tharwat Street. It caught the attention of pedestrians at night. By daytime, it became clear that the glow was a reflection of the gallery’s lighting on a green construction safety mesh that covered the window’s cornice. Was the art space doing renovation work to one of downtown’s most historic buildings?

Those who were curious enough to go up to the fourth floor found the green mesh extended against a room’s ceiling, and were introduced to one of the most intriguing works in “The Parenthesis Show.”

The exhibition opened in early March, showcasing the work of five young female artists who have been active on the local art scene over the past few years. It is the crowning event of a three-month artist-mentoring program developed by artist Ahmed Nagy in collaboration with the CiC, and with the support of the Goethe Institute in Cairo. The program exposed the artists to regular critiques, discussions on concept development and the formalities of working with art galleries, from contractual agreements to production grants and artist participation fees, which young artists rarely receive from exhibition spaces around the city.

Mai Hamdy, who made the untitled architectural installation, was one of them. She has recently emerged as one of the more experimental and interesting artists in the local art scene. Her untitled interactive wall painting at the 2011 Youth Salon, which invited viewers to scratch away the paint to uncover phrases such as “I do not think you care what you read here,” won her the grand prize, and was but one example of how the artist engages with exhibition spaces and visitors while challenging conditions of contemporary art production and exhibition in Egypt that fail to reach out to a broader audience.

And, in “Cairo Documenta II,” she presented “Moisture.” Carved directly onto the wall of a room in the dilapidating Viennoise Hotel in downtown Cairo, it read: “Moisture evokes the coldness of solitude and the injustice of others. Thus, heads crowd in the narrow space as if something once written here, dissolved into air bubbles amidst the amazement at the smell of the earth’s dryness.” Inspired by the building’s history as a hotel, Hamdy imagined the dynamics between the many guests who occupied its rooms before it was abandoned and became an occasional exhibition space. But for those who don’t know the building’s history, the work could also easily be interpreted in relation to the current street movement, and the recent disappointments with political and social developments.

For “The Parenthesis Show,” Hamdy built another site-specific installation. Using green construction mesh that is commonly seen covering downtown’s historic buildings, she reminds us of the neighborhood’s physical deterioration, and how most renovation attempts often end up compromising the city’s original architectural design. But the work also seems to subtly refer to the very building hosting the exhibition; it was bought by the Ismailia Company for Real Estate Investments, along with several blocks downtown, as part of a major rehabilitation project that has raised the local community’s concerns over gentrification.

The careful construction of relationships between the works and the exhibition site, as well as the different objects comprising the artwork, are what make “The Parenthesis Show” so strong. The exhibition is not curated in the conventional sense, by which artwork is selected to fit under an overarching theme. In fact, there is no theme to the show. Curatorial efforts were directed more toward practice development and artistic process. This is evident in the exhibition’s free poster publication of keywords and references that the artists engaged with during the mentoring program, as well as the artwork.

Sarah Hamdy, for instance, exhibits a mix of paintings, and an old TV set connected to her laptop. A number of delicate miniature paintings of seemingly dying birds are juxtaposed with two larger monochromatic ones of the moon surrounded by foggy shadows. While closely examining the detailed paintings, trying to decipher what initially might seem as an unrelated array of objects, spectators are occasionally interrupted by an inconsistent whistling sound with which the TV screen buzzes with white noise. There is something melancholic about the installation that evokes feelings of the supernatural.

But Hamdy’s experiment falls in between science and art. The artist learned that 1 percent of existing noise is believed to come from outer space, aural traces of the Big Bang echoing throughout the millennia. It is the possibility of capturing this noise that Hamdy seeks to offer her audience through the paintings, TV set and soundtrack randomly playing on her computer.

Challenging overt symbolism in artwork, common on the local art scene, was a main goal of the mentoring program reflected in the show. The artists were encouraged to develop their own language and create new sets of relationships that are more thought-provoking to viewers. Hamdy’s installation reflected more the process through which she realized the work, rather than didactic commentary on white noise. 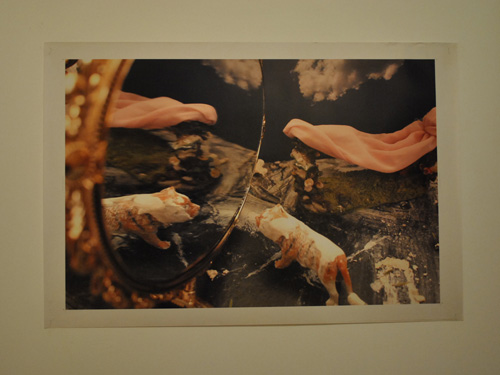 Gehad Anwar also followed a similar approach. Her looped video, projected on the wall next to photographic digital prints, showed a scene of a whimsical tiger, set against sublime scenery of a sun setting close to a beach, and an erupting volcano. The set up is surreal. But ironically, all the material used in constructing this fantastic setting is kitsch, from a plastic toy covered with modeling clay to party foam sprays and online images which Anwar has been collecting.

Anwar also sarcastically criticized kitsch culture in her piece “If you have an animal … let me know,” shown at “Cairo Documenta II.” But her recent video is wittier and subtler, using kitsch culture common in Cairo as an inspiration rather than simply mocking it; only halfway through the video do we notice that much of the scene was created in the display window of a shop.

The only two works in “The Parenthesis Show” that seem somewhat related are those of Weaam Said and Aya al-Fallah, as both explore strained human relationships yet in very different ways. Despite its clean-cut setup in the gallery’s back room, Said’s three boxes create feelings of unease between the whirling sound of the rotating glass box, the entrapped blue balloon and the perfect white cube from which light emanates. 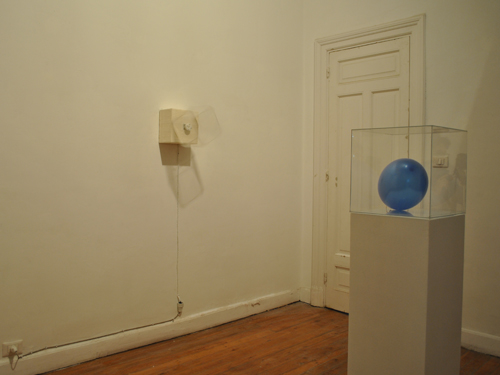 The artist’s inspiration for the work was purely personal, stemming from difficulties she faces in developing relationships in both the physical and spiritual realms, hinted at with the first box.

Fallah, on the other hand, presented a simple yet intriguing painting of her parent’s official wedding photograph that is phased out through multiple layers of white paint. The couple is on the verge of disappearing off the canvas; their facial features are sketchy and the details of their garments are erased.

The diversity of voices presented at “The Parenthesis Show” is quite refreshing. The exhibition on the whole also reflects some of the changes recently witnessed in the local art scene: a move away from the revolution-centric work that has dominated the last year, and the emergence of fresh artistic voices in exhibitions like the Youth Salon, the second edition of Cairo Documenta, and the most recent student exhibition “Parallel Visions” showing at Darb 1718. But it also reflects a break with some of the locally dominant curatorial practices and a narrowing in the gap between practicing artists across generations through the mentoring program. 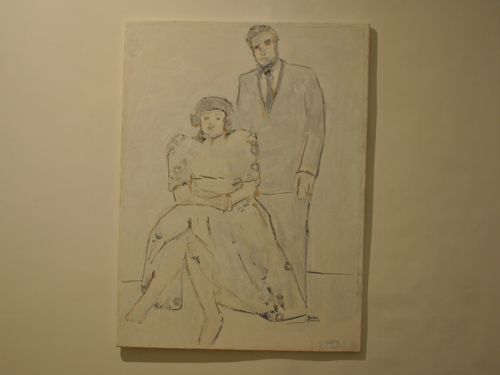 Egypt lawyer challenges law that says writers can be jailed