Officials from the Egyptian Stock Exchange will meet with officials from the General Authority for Financial Control and Misr for Central Clearing, Depositary and Registry on Sunday to set a date for the resumption of stock market trading.

The vice president of the securities sector of the Egyptian Federation of Chambers of Commerce said his sector has put together a memorandum on the crisis facing brokerage companies, including lay-offs and salary reductions. The memo includes suggestions for overcoming the crisis, he added.

The suggestions, Al-Masry Al-Youm has learned, include using funds to be provided by the Finance Ministry–LE250 million–as a goodwill loan to be paid off in fixed installments. Every company will be able to take out a loan equal to 30 percent of its capital, with a maximum of LE10 million per company.

A second suggestion is to use the non-commercial risks fund–a total of LE800 million–to support brokerage companies, provided they contribute a fixed percentage of their transactions to the fund in daily subscriptions.

The second suggestion may help ease the situation, said a former stock market official, but would require amending the rules of the fund, which in turn would require the approval of the Egyptian cabinet. 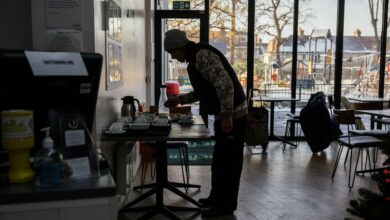 ‘Life or death.’ As Britons buckle under the cost of living crisis, many resort to ‘warm banks’ for heat this winter