Musician Omar Khairat is preparing for two concerts at the Cairo Opera House, on the stage of the Grand Theater,in December 20 and 21, accompanied by his band.

Precautionary measures will be taken most notably social distancing, wearing masks even while sitting on chairs, and crossing through sterilization gates.

Khairat will present a number of his famous pieces, including: “Al-Khawaga Abdel-Qader” (Foreigner Abdel-Qader), “Enta al-Masry” (You are the Egyptian),  al-Bakheel w Ana” (The Scrooge and I), “Dameer Abla Hekmat” (The Conscience of Miss Hekmat, “Eleqaa al-Thany” (the second meeting), “100 Sana Cinema”(100 years of cinema), “Qadeyet Amm Ahmed” (Uncle Ahmed’s Case), “Zy Ma Heya Hebaha” (As It Is, Love It), “Fiha Haga Helwa” (It Has Something Sweet).

Khairat is the founder and conductor of the Omar Khairat Band.

He was born in Cairo and raised in a family of musicians. His uncle, Abou-Bakr Khairat, is a great Egyptian composer of classical music, part of the first generation of such composers in Egypt.

An architect by profession, About-Bakr Khairat studied privately in Paris and founded the Cairo Conservatoire, which is regarded as the premier music conservatory in Egypt.

Khairat, whose music is said to bridge the divide between contemporary Egyptian and Western genres, has composed a number of works, including The Magic Perfumes (1989) and Arabic Rhapsody (1992).

His compositions have been featured in various movies and TV shows and he has performed at the Cairo Opera House a number of times.

Opera goers in Egypt can now pay for tickets in installments 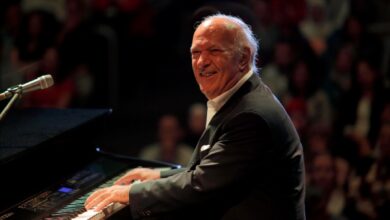