As the coronavirus outbreak spreads across the world, basic needs now include hand sanitizer, hygienic tools, toilet paper and facemasks to fight off the disease.

Facemasks in particular are seeing high demand among citizens and medical workers alike, as the virus spreads through direct contact or tiny droplets.

Issues with facemasks are that they are single-use, lack air purifier filters and can cause confusion on what side is to be worn as well as how to correctly take it off.

Upstarting young Egyptians are stepping up to the task of addressing these issues: they seek to produce a new kind of mask that can be used permanently and even has with its own air filter.

As Egyptians have begun to realize the seriousness of the coronavirus and the need to take measures confronting it, Hossam Mohamed is working to produce a protective mask, currently in the testing phase with the help of a doctor.

This new mask consists of four parts – the first three comprise its main body while the fourth part holds the filter.

Mohamed says this mask is made out of PLA plastic and can be used permanently, provided the user sterilizes it periodically and changes the internal filter.

He is eager to test the mask and hopes that the Ministry of Health and Population can examine his efforts in this direction.

“If the mask sterilization experiment succeeds and the Ministry of Health provides the filter, then the mask will be very useful and the shortage of medical facemasks will be resolved,” he said.

The costs of making the mask will depend on the material used, Mohamed explained, with the value of materials used for the filter ranging from LE40 to LE60, while the rest will be for the printing machine. 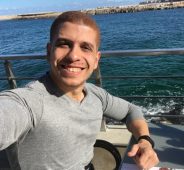 Mohamed Ibrahim was inspired to produce a new type of facemask after seeing a design on Facebook from an international company who manufactured their own mask.

Once he learned they had used 3D printing, Ibrahim realized he could do it too.

He immediately got to work through using their design to create a similar model, and tested it with those close to him and in the medical field.

According to Ibrahim, this mask takes around four hours to produce.

Elaborating on its components, he says that “It is a 3D design is printed using PLA, which is a material intended for this.” 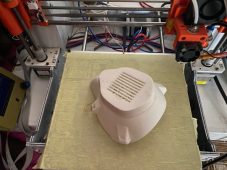 This mask is made up of two parts.

The first part comes in contact with the face and covers the entire nose and mouth, while the other is attached to it and holds the filter. For added protection, there’s even an extra part that goes over the facemask acting as a shield of sorts.

Mohamed says that the cost of printing the facemask is LE40, with added costs of LE18 to LE25 if the full face protector is installed.

He hopes for a direct communication channel with the Health Ministry, not just for his sake for all others working in this area, and that there be mutual cooperation.

With a desire to provide medical facemasks too, Randa Atef has been hard at work coming up with a product that suits these current times.

She’s been aided by a doctor, her own sister, who tested it out for her.

Randa has also used PLA to manufacture her mask, as it is an easily sterilized material that can be continuously used.

Her facemask consists of three parts with a filter, and is currently in the testing phase.

However, professional medical opinions aren’t on the side of these ambitious youth.

Professor of dermatology and the former head of the National Research Center, Hani al-Nazer, said that plastics are ineffective for facemask production as they do not fall under the approved medical specifications of the World Health Organization (WHO) which are based on the standard facemask.

He points to the fact that standard facemasks are always made out of fabric and not plastic.

“The issue is not related to printing or technology but rather the components, and so far it has not been approved by the Health Ministry and must be tested first,” Nazer said.

Another dermatology professor, Hoda Monieb, says she has no background on these PLA facemasks but knows that what’s being commonly used is the standard disposable type.

Disinfecting these reusable plastic masks would require materials that not everyone has access to, she added.

And Anesthesiologist Amr Ahmed says that if it turns out the PLA masks irritate the skin, cause allergies and do not come with an N95 filter, they are as good as useless.

On the advantages of N95 facemasks, he said: “This mask is intended for dealing with patients or suspected cases of coronavirus since it largely prevents 95 percent of the volatile parts in the air that reach three of 10 microns, and its also suitable for the face.”

Amr doesn’t see these plastic masks as replacing the standard ones, saying that “What is best for medical procedures is something used for one time and disposed.”

The WHO has specified the following circumstances in which a person must put a facemask:

-Wear a mask if you are coughing or sneezing.

-Masks are effective only when used in combination with frequent hand-cleaning with alcohol-based hand rub or soap and water.

-If you wear a mask, then you must know how to use it and dispose of it properly.

-Before putting on a mask, clean hands with alcohol-based hand rub or soap and water.

-Avoid touching the mask while using it; if you do, clean your hands with alcohol-based hand rub or soap and water.

-Replace the mask with a new one as soon as it is damp and do not re-use single-use masks.

-To remove the mask: remove it from behind (do not touch the front of mask); discard immediately in a closed bin; clean hands with alcohol-based hand rub or soap and water.

‘Ana Li Habibi’ to start screening on Wednesday in cinemas