There have been numerous rock band competitions in Egypt over the past decade including the SOS rock musical festival, and Nile FM’s "Battle of the Bands," among others. Last week, the most popular live music venue in Cairo hosted the latest and largest Egyptian rock festival to date. Several hundred Egyptian youth converged on their favorite musical venue, Abdel Moneim el-Sawy’s Culture Wheel in Zamalek, to get their dose of hard ear-candy and to support their favorite homegrown rock and metal bands.

The four experienced members of Andormida, who have been performing for well over 20 years, served as the judges of the rock festival. Andromida chose six finalists from a total of 12 competing rock and metal bands. The 12 participating bands included: Instrumental Therapy, Rever, Serenade, The Lefties, Azraq Samawy, F.I., Varden, The, Simplexity, Artificial Flavor, Karma, and The Public. These bands rocked their stages and their audiences at the festival with a variety of genres ranging from psychedelic rock to progressive metal, from punk rock to thrash metal.

Nearly all the bands and performers impressed audiences with their musical virtuosity. Equally impressive was the presence of two female performers in the male-dominated scene, including the vocalist from melodic rock band The Artificial Flavor and the drummer from heavy metal band The Lefties (named for the fact that the band members are left-handed).
After attending the performances of all 12 bands from 14 to 15 October, Andromida took the day off on 16 October to select the six finalists who would perform on "The Final Stage" the following day. Andromida chose six finalists.

Azraq Samawy, a five piece progressive hard rock band (guitar/vocals, guitar, bass, keyboards, and drums) from Alexandria who sounds like a mix between Pink Floyd, Dream Theater and Iron Maiden. Azraq Samawy was among the most original bands participating in the festival in that they only performed originals, while many other bands played covers. This ultra-tight band was also the only to perform their songs in Arabic. Their catchiest original was "Salah el-Din," about bygone days of chivalry and virtues. Pieces performed include both songs and instrumentals.

SimpleXity, a four piece (lead guitar/vocals, bass/vocals, keyboards and drums) progressive metal band also performed original songs, but in English. This band sounds like a cross between the classic rock band Rush and the styles of New Metal bands. SimpleXity also performed a cover of "Subdivisions" by Rush. Gamila Ismail, mother of bassist Noor Ayman who is the son of Ayman Nour, founder of Al Ghad political party, was clearly visible in the front row taking videos of her son performing with his band. Catchiest original: "Words," an instrumental.

Then there was The, a five piece hard rock/metal band (guitar, vocals, bass, keyboards, drums) that sounds like Creed meets The Cranberries meets Tool. The has an impressive output overall and well-rounded sound. While clearly demonstrating their musical virtuosity, this band could work on being livelier performers. The performs both originals and covers. Catchiest original: "Shallow"

On the other hand, Rever is a five piece (vocals/percussion, guitar/vocals, bass, guitar and drums) rock cover band that performed no originals. They played The Who’s "My Generation," The Beatles’ "Help," Joan Jett’s "I Love Rock N’ Roll" and a host of songs by the Beatle-esque band Oasis including "What’s the Story Morning Glory?" "Supersonic," "Maybe," and "Cigarettes and Alcohol." While Rever performed their covers rather sloppily they made up for this with their interaction with the audience. A mini mosh-pit formed in front of the stage with some slam-dancing and even one incident of stage diving.

The Public, a four piece (guitar/vocals, keyboards, bass and drums) classic-rock influenced band, played original works that sounded like a cross between Deep Purple and the Doors. The Public performed their own renditions of Elvis Presley’s "Blue Suede Shoes," Dire Straits’ "Sultans of Swing," and Pink Floyd’s "Comfortably Numb" and "High Hopes" (the last cover was rather sloppily performed and was the the only low point in their performances.) The Public is a very tight band performing marathon originals and extended renditions, with each piece lasting around 10 minutes. This band also had a very powerful stage presence, and impressive light shows and visual effects. The Public received a standing ovations delivered from on top of chairs with numerous fans chanting "We want more! We want more!" Catchiest original: Phase II.

Finally there was Karma, a five piece (vocals, two guitars, bass and drums) heavy metal band that performed both originals and covers. Their music is melodically rocking, however, their vocals and lyrics need some enthusiasm. Covers include "Driven Under" by Seether, and very impressive metallic renditions of George Michaels "Careless Whisper" and Lionel Ritchie’s "Hello." Catchiest original: "Can’t Let Go"

On the closing night of this Rock Festival Andromida performed their impressively tight copy-cat covers of classic psychedelic rock bands Camel and Pink Floyd. Standing before the glass plaque trophies, el-Sawy announced that there would be two third place winners this time around: Rever and The. The second prize went to SimpleXity, and the much deserved first place prize went to Azraq Samawy. The "most original band" prize was awarded to The Public.

There was also a "Broken Hearts" prize for the band that did not manage to win any of the other awards. This went to Karma. Karma will thus be the opening act in the Second Rock Festival to be held in April. If at first you don’t succeed – rock, rock again. 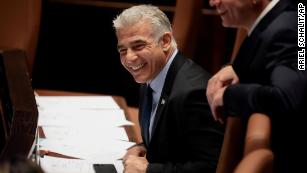 A leader for all Israelis? Yair Lapid takes over as caretaker prime minister

BTS will take a break to pursue solo projects