Thousands of Ultras Ahlawy members marching from Shubra arrived in Tahrir Square late on Friday afternoon, followed shortly thereafter by a march from the Ahly Club, arriving via the Qasr al-Nil Bridge entrance. Marches from Al-Fatah Mosque and Ramses Square are also currently headed to the square.

Ultras from Cairo and across the governorates planned the mass rally to demand justice for the martyrs of the Port Said Stadium massacre that occurred almost a year ago.

The protesters chanted against the Interior Ministry, accusing its leaders of responsibility for the Port Said Stadium massacre, and raised banners demanding justice for its victims.

Several passersby and travelers heading to Ramses Station showed solidarity with the protesters, some even chanting with them.

A fourth march of thousands of Ultras arrived in Tahrir from Sayeda Zeinab earlier in the afternoon, raising the flag of the Ultras Ahlawy and and banners demanding punishment for the murderers of the victims in Port Said.

"If your son was the victim, you would not have ignored the case," the protesters chanted, along with other slogans and songs against the police.

Other banners read: "You who is asking why we came here, do you know why [they] died?"

A stage was set up in the square. Protesters played Quranic verses, followed by Ultras Ahlawy songs. A number of protesters distributed a statement calling on people to mobilize outside the court on 26 January, the day a verdict is scheduled to be issued in the case.

The Ultras announced their planned rally in a statement on Thursday, saying that the protest would be a "rehearsal for the day of decisiveness." They planned to meet outside the Ahly Al-Jazeera Club and then march together to the square at 3 pm, the statement continued. Ultras from other governorates would head immediately to Tahrir.

Group leader Mohamed Tareq denied rumors that the Ultras had made a back room deal with the Muslim Brotherhood and Freedom and Justice Party. "This is not the case; some Brotherhood figures have decided to show solidarity and promised to stand by our side," Tareq told Al-Masry Al-Youm.

Several revolutionary movements, including the Popular Current and the April 6 Party, said they would also participate in the protest.

Tahrir remained calm as of Friday morning prior to the marches' arrival, amid stricter security measures by protesters at entrances to the square, which were closed by popular committees. By late morning there were over 100 tents in the middle of the square, belonging to independent protesters and members of Constitution Party and Wafd Party.

Dozens of banners were hung up demanding justice for the victims.

More than 72 Ahly fans were murdered in a match between the Ahly Club football team and Al-Masry Club team in Port Said on 1 February 2012 after Masry fans stormed the pitch and attacked their rivals.

Seventy-five defendants have been charged with responsibility for the rampage.

The Port Said Criminal Court began hearings in the case on 17 April, convening at the Police Academy in Cairo due to security concerns. 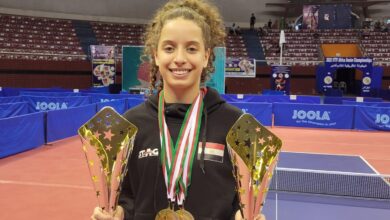