The United States is considering a request from the United Arab Emirates for military support to assist a new offensive in Yemen against al-Qaeda's most dangerous affiliate, US officials tell Reuters.

A US-backed military push by the Gulf ally could allow the administration of President Barack Obama to help strike a fresh blow against a group that has plotted to down US airliners and claimed responsibility for last year's attacks on the office of Charlie Hebdo magazine in Paris.

Al-Qaeda in the Arabian Peninsula (AQAP) has exploited the chaos of Yemen's year-old civil war to become more powerful than any time in its history, and now controls a swathe of the country.

The UAE has asked for US help on medical evacuation and combat search and rescue as part of a broad request for American air power, intelligence and logistics support, the US officials said. It was unclear whether US special operations forces — already stretched thin by the conflicts in Iraq, Syria and Afghanistan — were part of the request.

The US officials, speaking on condition of anonymity, said the UAE was preparing for a campaign against AQAP, but declined to offer details, citing operational security. The UAE is playing a key role in the Saudi-led coalition fighting Houthi rebels in Yemen that are loosely allied with Iran.

The White House and the Pentagon declined to comment. Government officials in the UAE did not respond to request for comment.

Washington's consideration of the request comes ahead of Obama's planned trip next week to a summit of Gulf leaders in Saudi Arabia. The multiple conflicts in Yemen will be high on the agenda.

Saudi-backed Yemen government forces and the Houthi fighters began a tentative truce on Sunday, although there have been reports of violations.

Despite significant US strikes, including one that killed AQAP's leader last year, US counter terrorism efforts have been undermined by Yemen's civil strife.

The worsening conflict forced the evacuation in early 2015 of US military and intelligence personnel who had orchestrated an anti-AQAP campaign involving Yemeni special forces raids backed by US air power.

Renewed ground operations spearheaded by UAE special forces would fit the so-called "Obama doctrine" of relying mostly on local partners instead of large-scale US troop deployments. Washington’s use of surrogate fighters has been criticized as inadequate in conflicts ranging from Iraq to Syria to Afghanistan.

The officials said the US government's consideration of the UAE's request in part reflected the Emirates' proven capabilities, including well-trained and resourced special operations forces on the ground.

Michael Knights, an expert on Yemen's conflict at the Washington Institute for Near East Policy, said he and a colleague estimated the UAE's presence in Yemen peaked at about 5,500 troops in July-October of last year and now is as low as 2,500 personnel.

Knights said the UAE played a critical role in efforts by the Saudi-led alliance to push back the Houthis, employing a mix of capabilities, including mechanized infantry columns, that proved decisive.

"The UAE has been the real central player in the ground war," he said.

In a nod to its capabilities, some US military officials have nicknamed UAE "Little Sparta" after the ancient city-state known for its fighting prowess. Analysts note that the small Gulf state has also played an outsized role in other conflicts, from Libya to Afghanistan.

Frederic Wehry, a Middle East expert at the Carnegie Endowment for International Peace and a US Air Force veteran, said the UAE's ability to combat AQAP would rest partly on its ability to navigate Yemen's complex web of tribal allegiances.

UAE forces currently are concentrated mostly around the southern port of Aden where the embattled Yemeni government has found safe haven. But since retaking the city in mid-2015, they and local forces have struggled to impose order, opening the way for al-Qaeda and Islamic State militants to operate there.

AQAP is estimated to now control 600 km of Yemeni coastline and the southeastern port city of Mukalla, home to 500,000 people.

One particular US concern is Qassim al-Raymi, who last year succeeded Nasser al-Wuhayshi as AQAP's military commander after a US drone strike killed Wuhayshi.

One US official, speaking to Reuters on condition of anonymity, said al-Raymi "appears to us to have intent as well as operatives with capability to be able to do external plots."

The United States thinks there are dozens of AQAP operatives deemed to be "true threats" capable of mounting external attacks, the official added.

Washington also has long sought Ibrahim Hassan al-Asiri, considered the most formidable extremist bomb designer. He is accused of a creating hard-to-detect bombs, including one used in a failed bombing of a US-bound airliner in 2009.

The United States has continued a campaign of sporadic air strikes in Yemen, including one in March on an AQAP training camp that killed at least 50 suspected militants. 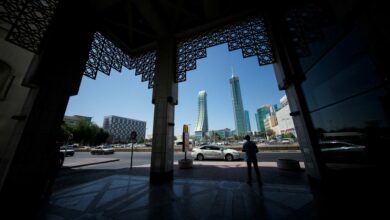