A rare Afghan marsh that was once a royal hunting ground is set to come under the official protection of the UN environment agency, with the aim of saving hundreds of migratory bird species.

On the long, arid journey to the Caucasus and Siberia, across the Hindu Kush massif, the Kol-e-Hashmat Khan wetlands outside Kabul provide sanctuary for the thousands of storks, egrets, pelicans and flamingos that head north every spring from southern India.

But after 40 years of conflict and neglect, their habitat is being threatened by the growth in new homes, irrigation systems, rubbish and global warming which is gradually changing the local environment.

Now the UN has designated the wetlands a conservation site, the Afghan government said on Sunday, as it also looks to help preserve the water supply of the capital.

“There are probably more than 300 or 400 species that pass through, though without an accurate count it is hard to be sure,” says Andrew Scanlon, head of the United Nations Environment Programme (UNEP) in Afghanistan.

They are migratory birds and “tourists” who stay for a very short period of time to find food, he adds.

At daybreak, the marsh comes alive with the morning chatter of the birds hungry for breakfast.

Binoculars in hand, Scanlon stands atop a tower that dominates the landscape.

In the distance is the silhouette of Bala Hissar, an ancient fortress that defended the city for centuries. Opposite, mud houses and sturdier dwellings made from bricks seem to spring up at random, hurrily erected during wars for tides of refugees and displaced people.

It was once a favoured place for royals to go hunting, though Scanlon stresses any activity would have been carried out “in a sustainable way”.

But with the invasion of the Soviet army in 1979 and the succession of conflicts afterwards, including the civil war in the early 1990s, Afghans were preoccupied by their own survival and the environment suffered.

Scanlon says that land grabbing was common in the chaos of the 90s as Afghans fought for survival. The marshes became a sanctuary, providing safe haven and water.

As Afghanistan’s population swelled with the return of refugees after the Taliban were toppled in 2001, he says the situation became a “tragedy of the commons”.

The phrase refers to an economic theory in which individuals act in their own self-interest towards a shared resource but against the common good.

“Everyone is taking a piece to survive but all together this is a tragedy, it’s no one’s fault but everybody is guilty,” he says.

Taking advantage of the chaos, factional and party leaders built houses on the water’s edge. According to the UN, about 50 hectares of wild land were taken over, which the Afghan environmental protection agency, created in 2005, is now trying to recover.

“Some politicians are reluctant” to act, but attitudes are changing, said Muhibullah Fazli, the agency’s biodiversity expert.

The most important thing, he says, is to educate local residents. “The problem is the people taking their cattle to graze or cutting the reed, local people also pour their garbage in the river, they don’t know the scientific value of this area,” he said.

Together with Qargha reservoir, Kol-e-Hashmat Khan, a marsh some eight metres deep at its centre, is one of Kabul’s two water sources. But experts are already worried about its falling water levels.

NGO Afghanistan Youths Greens was ordered by UNEP to organize waste collection and educate the villagers who will continue to live on the shores.

“At the beginning people didn’t accept us but finally we managed to convince them,” says the organisation’s director Mohammad Shafaq. “I told them what the Holy Koran has said,” adds Fazli. “Birds are a community just like yours… they need a habitat and they need food.” 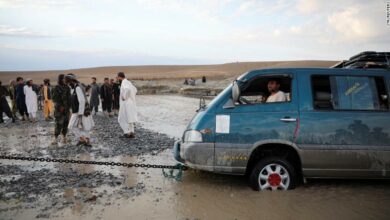 She fled Afghanistan with her law degree sewn into her dress. Many of her colleagues were left behind