DAMASCUS, Syria (AP) — Mohammed Haji Abed drives his yellow taxi through the busy streets of the Syrian capital for about 12 hours a day, toiling in the sweltering summer heat but earning barely enough for his family of five to get by.

It was easier for him to make ends meet at the height of his country’s civil war, when rebels regularly lobbed mortars into Damascus from their strongholds on the outskirts of the city.

In the past year, as the Trump administration tightened sanctions on Syria and re-imposed sanctions on its chief regional ally, Iran, living conditions have become steadily worse, compounding the daily struggles of a worn-out population that has lived through eight years of conflict. 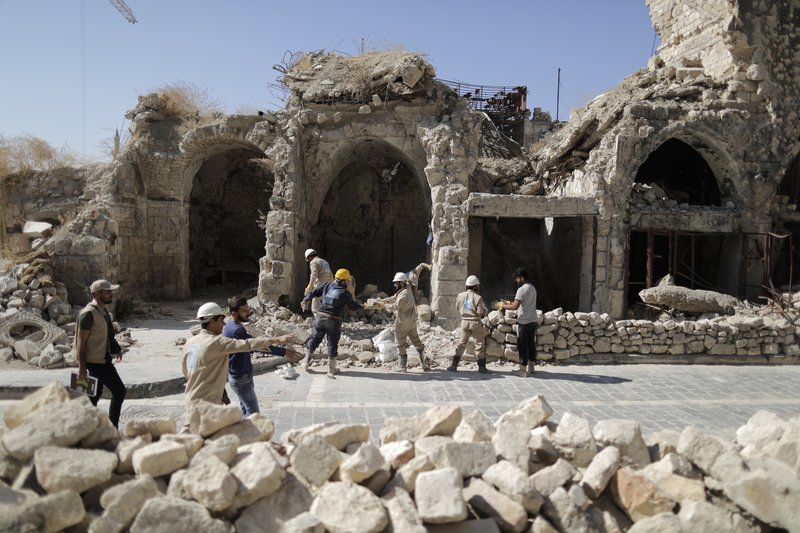 “The economic sanctions are affecting the whole country,” said Haji Abed, sitting behind the wheel of his car in an eastern Damascus neighborhood that until last year was a front-line with insurgents. “People can’t take any more,” added the gray-haired man in his late 50s.

Sanctions by the U.S., European Union and some Arab countries have been in place since 2011, after President Bashar Assad’s security apparatus cracked down on protests against his rule. The sanctions targeted the oil industry, money transfers and a number of institutions and officials, including Assad.

The Trump administration has hiked up the punishment, particularly by moving to stop oil exports by Iran — including its shipments to its ally Syria. In November, the U.S. Treasury Department added a network of Russian and Iranian companies to its blacklist for shipping oil to Syria and warned of “significant risks” for sanctions violators. In early July, a supertanker likely carrying around 2 million barrels of Iranian crude was detained in Gibraltar on suspicion of violating EU sanctions against oil shipments to Syria. 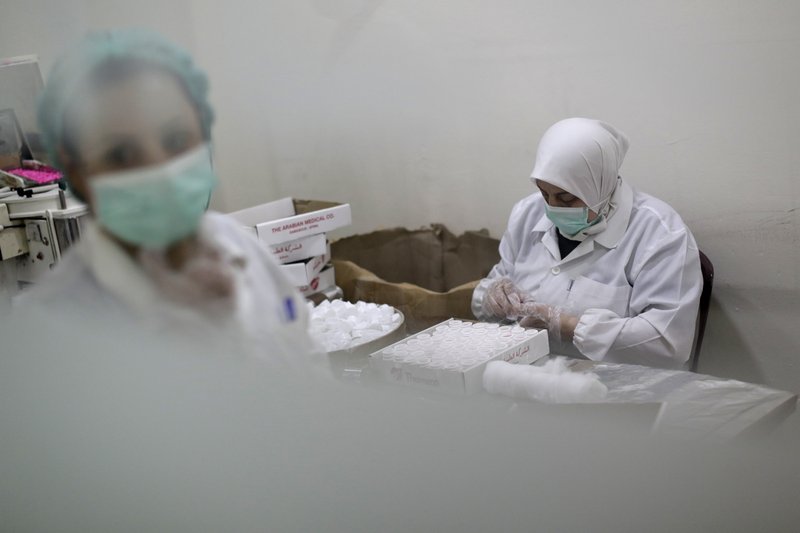 The results have hit hard on a population traumatized by a civil war that has killed nearly half a million people and displaced half the population over the past eight years.

Once an oil exporter, Syria now relies on imports, and higher fuel costs caused by the sanctions have pushed up prices in nearly every sector. The currency lost a third of its value in 2019 alone, and now stands at 600 Syrian pounds to the dollar, compared to 47 at the onset of the conflict. Eight out of 10 Syrians live below the poverty line, making less than $100 a month, according to the U.N.

He used to be able to buy unlimited subsidized fuel. But since the new U.S. sanctions, the government set a monthly cap — private car owners can buy 100 liters a month, taxi drivers 350 liters. Those who want more must pay the market price, which is double. 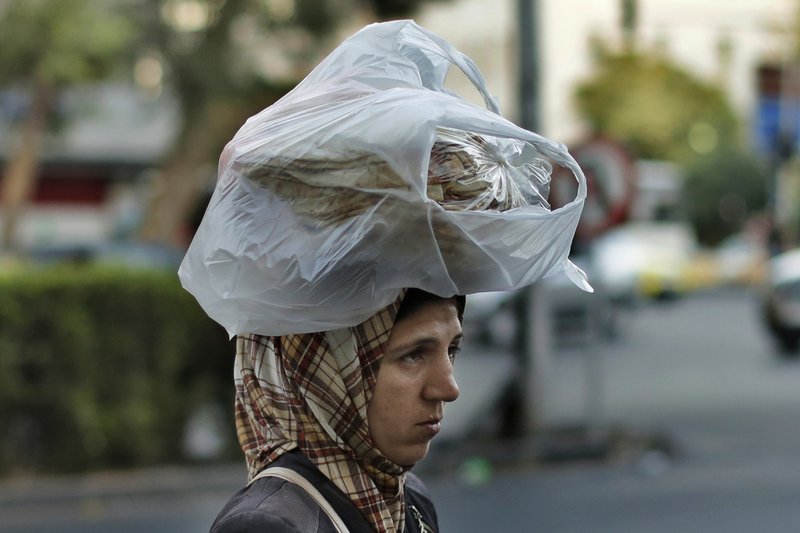 A Syrian woman carrying bread on her head in the traditional way as she crosses a street in Damascus. (AP Photo/Hassan Ammar)

The government says Syria’s losses from sanctions are in the billions of dollars.

The ban on money transfers and other measures have particularly hurt medicine and pharmaceutical industries, a stinging loss for a country that once produced 90% of what its people needed. Syria now relies on imports of vaccines, medicines for cancer, blood derivatives and dialysis supplies.

This triggers sporadic shortages. “Three months ago, there was no baby formula available,” said a pharmacist, Samir Aftimos. “People with children ran from one pharmacy to another to search for it.” The crunch was relieved when Iran sent supplies.

Because of shipping restrictions, most medicine imports must be brought by land from Lebanon, increasing costs, Assistant Health Minister Habib Abboud told The Associated Press. Companies have a hard time collecting or making payments abroad and several foreign medical companies that used to work in Syria are canceling their licenses, Abboud said. Syria is looking to firms in Russia, China, Iran and India to step in. 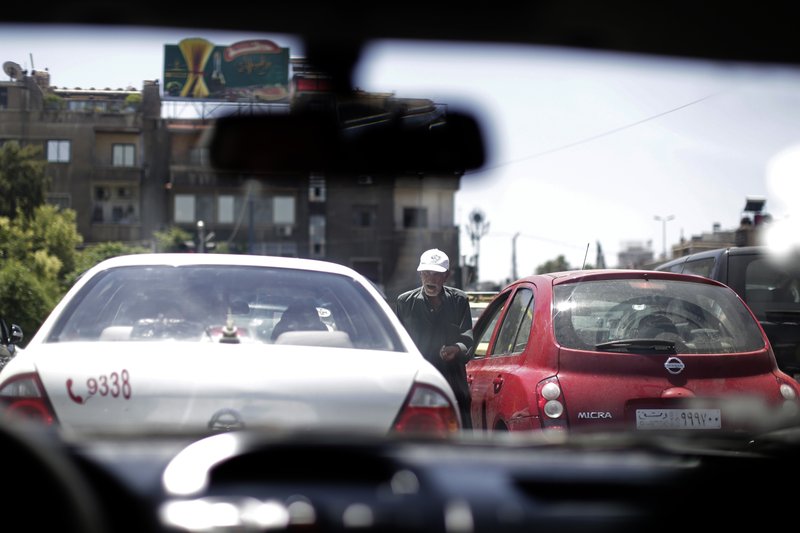 An elderly Syrian man begs for money in traffic on a busy street in Damascus. (AP Photo/Hassan Ammar)

Around 25 of Syria’s 70 medicine factories were destroyed or badly damaged during the conflict, Abboud said. He said many have been repaired as government forces regained large parts of Syria over the past three years. That has brought production nearly back up to pre-war levels, according to the Health Ministry.

One of the largest Syrian companies affected by the war is The Arabian Medical Co., or Thameco, whose factory in the eastern Damascus suburbs of Mleiha was taken by insurgents and heavily damaged during the war. The state-owned company now works out of a Damascus building that used to be a storage space, where dozens of employees produce painkillers, antibiotics and other medicines.

But it is difficult to obtain raw materials and spare parts, said Thameco’s general manager, Fidaa Ali. “Most foreign companies complied with the conspiracy of the economic sanctions and the imposed embargo on Syria,” he said. 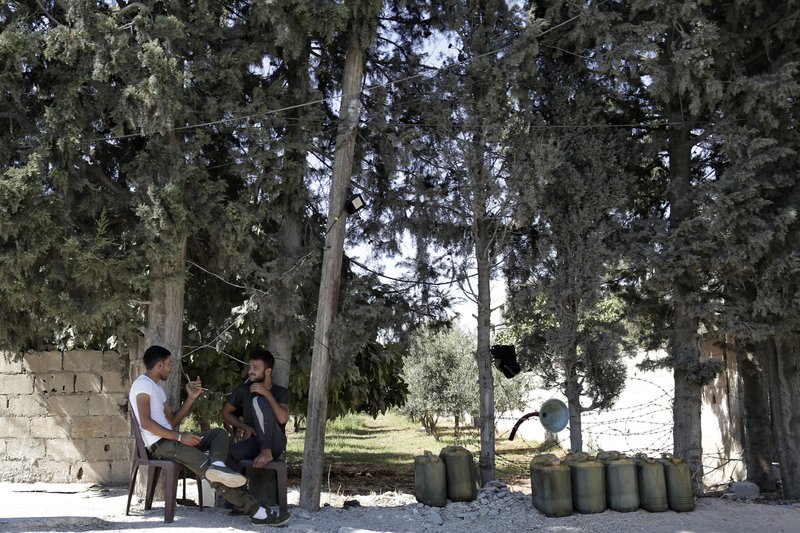 Syrian men wait for customers next to plastic jerrycans of gasoline in the old city of Aleppo. (AP Photo/Hassan Ammar)

EU and U.S. sanctions also target hundreds of entities and individuals, many of them businessmen close to Assad’s leadership. Washington adds names to the list each year. The most recent, added in June, was businessman Samer Foz and his family, and their Aman Holding company. Washington accused Foz of making a fortune by developing lands confiscated from Syrians who fled the country.

Fares Shehabi, a lawmaker and prominent industrialist, calls EU sanctions on him “unfair” and says they have cost him millions of dollars.

“No one can claim not to have been affected by the sanctions. It is not only the people who are under sanctions like myself,” said Shehabi, who is based in Aleppo, Syria’s largest city and once its commercial center. 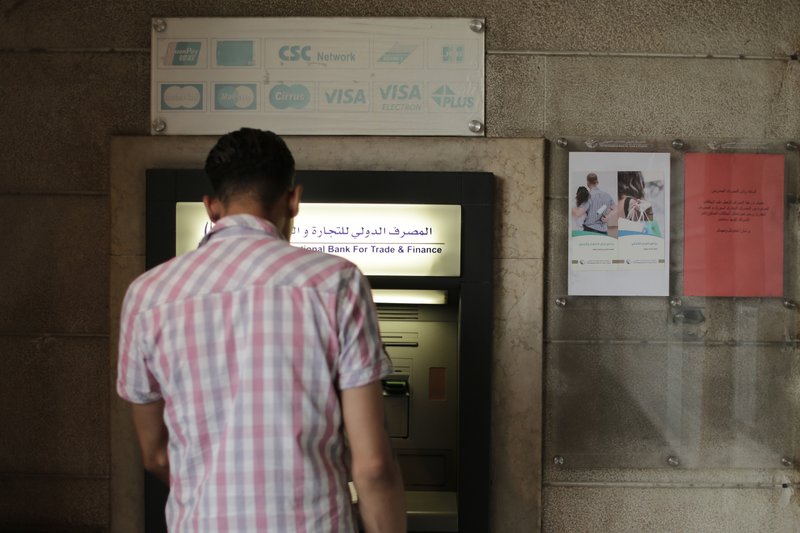 A Syrian man using an ATM machine outside a branch of the International Bank for Trade and Finance in Damascus. (AP Photo/Hassan Ammar)

Tayseer Darkalt, who owns a factory in Aleppo producing machines that make potato chips, says that because of sanctions he can’t import or export products or spare parts. With no money transfers, he travels abroad to collect payments in cash, but that adds airplane and hotel costs. And he’s wary of carrying a lot of cash.

“The sanctions are harming normal citizens. They are not punishing the government. They are punishing us.”

In this Wednesday, July 24, 2019 photo, a Syrian woman leaves a pharmacy after buying medicine in the Syrian capital, Damascus. Syrians say it’s even harder now to make ends meet than it was during the height of their country’s civil war because of intensified U.S and European sanctions. Prices have leaped because of restrictions on oil imports, the value of the currency has plunged in recent months. Most of the country is now below the poverty line, earning less than $100 a month. (AP Photo/Hassan Ammar)

US-backed fighters chase IS gunmen near prison in Syria